Writer and Director Richard Linklater’s new film is something unique. In the vein of some of his earlier works, the setting is a very important character. For Apollo 10 ½, however, history is also a parallel character.

The setup is simple. Its Netflix description is, “This film about a kid with out-of-this world dreams in the summer of 1969 blends nostalgia and adventure for a watch-together movie night win.” There’s a lot to unpack there, but it really is that simple.

There is something genuinely interesting about this film, and not just because it’s a Linklater film that makes you feel nostalgic – just as Dazed and Confused looked back on another era with fondness in spite of its flaws. There exists that same optimism here, and yet, it’s much darker than that. 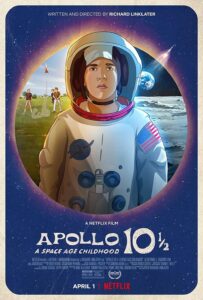 Linklater’s narrative describes the late 1960s as a time of turmoil. It simultaneously sets the political, economic, and social backdrops of the moon landing without really taking sides, which I find super admirable.

The rotoscoped style of the film is something that I appreciate, especially since it’s not done often. When it is, I appreciate when it is done this well. To that end, seeing the history, the live events through the television rotoscoped was intriguing. I’ve seen JFK’s speech and Rice, and I’ve seen a giddy Cronkite take his glasses off during the Lunar broadcast, but to see it done as rotoscoped art was something else.

It’s amazing and almost ridiculous how easily the fact melds with the fiction. It’s not just the narrative that Linklater’s chosen to tell; it’s that he’s committed to the bit. I, for one, feel that he really pulls it off.

I believe part of that is due to the nature and style of the rotoscoped animation because it allows Linklater to get away with some tongue and cheek “Fun with Dick and Jane”-type things when he’s telling the story. Nothing sinister here, but you get the sense of something bigger, something more ominous at times, and I believe it is because of what’s unsaid. That’s something powerful for a movie about 1969 released in 2022.

Then again, as the narrator says “…the world was changing and so was how we saw ourselves in it. When Apollo 8 snapped the famous Earthrise photo over the moon on Christmas Eve, it gave us Earthings a perspective we’d never had. There we were, all together on this floating blue ball in space. It was said that someday soon, when humans fully grasped what this meant, there would be a shift in consciousness, and there would be no more wars.” Well, we’re still waiting for that shift in 2022. 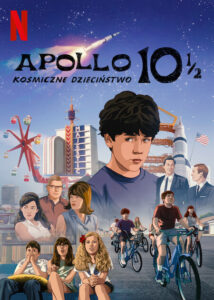 Let’s be honest here: 1969 wasn’t the pinnacle of human achievement. We may have gone to the Moon, which was fantastic, but there was a war on, there were social injustices and inequalities being dealt with on a regular basis, and the counterculture was just hitting their stride. In short, there was a lot going on, and not all of it was great. However, looking back, almost all of it was historical in some way, shape, or form.

As Stan’s older narrator voice says, “Science class was so exciting because it felt like current events. It was all astronomy, cosmology, and Apollo related.“ Good for 1969 Stan. For a student of the 90s like me, it all felt like ancient history. Even the Space Shuttle felt old when we watched it launch in our classrooms on live TV.

That Netflix has included in the short blurb, “a watch-together movie night win” is interesting to me. If anyone who was alive for the moon landing were to watch this movie with someone who was born generations after, it’s likely to generate a discussion. Probably not around the fictionalized Apollo 10 ½, but around the actual history Linklater does include, which includes the civil rights movement, television, technology, and more.

Of course the music plays its part, being selected not only for the time but of the time. A potential blockbuster soundtrack exists for this film, if that was something people still cared about. For now, just know the soundtrack to this film would make a really great playlist on your streaming platform of choice.

It’s nostalgic with a sense of purpose. “Look at what we survived” is what one generation will say versus “they let you do what?!” will be other generation’s reaction. Yeah, Linklater’s created something magical here. Despite being released in 2022, it’s very easy to get caught up in the optimistic narrative with the moon shot being just the beginning. 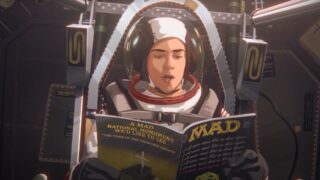 Meanwhile, Artemis is currently getting prepared for another moon shot, so we know how it all panned out. We’re also familiar with the message and the end of the film, similar to one at the end of Apollo 13 where Tom Hanks narrates as Jim Lovell, “When will we we going back?” This film says since that time, “No one has been back… yet.”

Well, we’re getting there. It just took a lot longer than expected. In the meantime, enjoy Apollo 10 ½ with your family, your friends, or just by yourself.

For me? This movie was made for me. It’s got history. It’s got the moon landing. It’s even rotoscoped, for crying out loud. And it’s playing with the form of storytelling in a not entirely new way, but in a way I haven’t seen done successfully in a long time.

Read the Secret File of technical information and quotes from Apollo 10 ½.

You are interested in higher education, whether material or spiritual.
Your moods signal a period of change.
Good clothes open many doors. Go Shopping.
More Fortunes >