Geek Space: The Top Shelf Behind Me 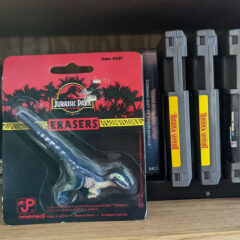 I haven’t done a Geek Space post in a while, and while the “Two Bakshi Walls” post is in this house and this office, to be specific, the last time I wrote about a shelf, it was back in my previous living space.

So I decided that I would focus on the shelf that is literally behind me when I sit at my desk to write, podcast, edit, work, all of the things. This shelf is pretty cool, though I’m in front of it and it isn’t seen much. This post will change all of that.

From Left to Right, let’s do this.

First thing you notice, far left is a small 1983 World Champions Baltimore Orioles A&P giveaway pennant. This is proof that in my lifetime my favorite baseball team has won it all, at least once. I’m hoping for more.

Next is a series of old books that I received when cleaning out my Granddad’s house, who coincidentally, is probably the one who saved me the small Orioles Pennant. The books are; The Talisman by Sir Walter Scott, Eugene Aram by Lord Lytton, Nicholas Nickleby by Charles Dickens, Bleak House by Charles Dickens, all four of which are Winston’s Illustrated Handy Classics from The John C. Winston Company of Philadelphia. 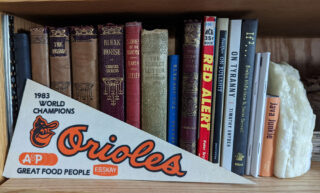 Then Stories of the Universe Earth by H.G. Seeley, Hawthorne’s Scarlet Letter, The Light of Asia by Edwin Arnold, which are also books I believe I have because of my granddad. The Sonnets of William Shakespeare, came from the other side of the family via my Bubby.

Red Alert by Peter Bryant I picked up myself because I wanted to read the inspiration behind Dr. Strangelove.

On Bullshit by Harry Frankfurt, On Tyranny by Timothy Snyder, If2… by Evelyn McFarlane & James Saywell; I have no idea where they came from, but next to them are two old larger format Magic: The Gathering rulebooks from the 4th Edition Gift Set from way back in 1995. And the last book is a small novelty book called Java Junkie.

Of those, I’ve read Red Alert most recently, a few others like The Sonnets or Scarlet Letter I haven’t read since high school or college, and the rest are on my to-read list, excepting the rule books, I know how to play Magic: The Gathering and if I needed help, a rulebook from 1995 is going to be the last place I look.

The marble bookend is testing my memory. I think it actually came from my parents. But now to the middle section. At the back on the bottom is a pile of The Key. A newspaper I wrote for at Keystone College, and those are all of the issues that contain some of my words. On top of that is a VHS copy of Count Duckula, a show I loved as a child, and while I’ve gotten rid of most of my old media, that one I keep holding onto. 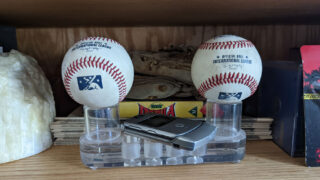 On top of that is an Al Kaline baseball glove, that was passed down to a toddler me at some point and I’ve held on to it ever since. There is a small novelty squeeze baseball in it that I sometimes throw against my office wall, because why not?

In front of that pile are two baseballs that are official International League baseballs, that I picked up as foul balls at the Lehigh Valley IronPigs’ Coca Cola Park. And in between them is probably my favorite cell phone of all time, the Motorola Razr. That phone literally went through the wash and kept on working… Good luck trying that with your new smartphone!

The Jurassic Park eraser is a velociraptor from 1993. I was a big fan of the first movie and still am a pretty big fan of the franchise, but I was enough of a geek, packrat, and collector, that I never even took this eraser out of the packaging. It is actually leaning up against two small cases of 3.5 floppy disks. Yes, I still have a drive to read them, but the ones behind the eraser are all blank. And behind the cassette and NES games, I’m about to get to are also a few blank CDs in jewel cases just in case. In case, what? I don’t know but always be prepared.

The cassette tape next to the raptor is probably one of my favorite childhood albums, Teenage Mutant Ninja Turtles: Coming Out of Their Shells. I’ve already written about this, but do know that it is on streaming services if you want to know what the soundtrack to my early youth was. 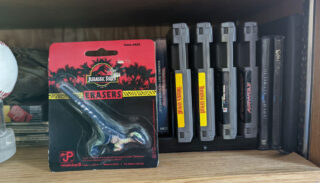 Then we come to the Nintendo Entertainment System cartridges. In fairness, I never had my own NES, but thanks to the wonders of emulation, I was able to fall in love with the Dragon Warrior series, which then became Dragon Quest. The other two cartridges are a fandom thing. I still maintain MTV’s Remote Control was one of the greatest game shows ever, and that is why I have the NES cartridge, no I’ve never played the game. And the last NES cartridge is Airwolf, another fandom entry into this small collection, although I did play this game a bit in emulation and at a friend’s house, it’s the nostalgia for the show that remains strongest, yes I own the series on DVD.

The last thing on the shelf is Ultimate Quake, a three-CD collection of Quake, Quake II, and Quake III. And while I have beaten all three of them, Quake, the original, remains one of my favorite first-person shooters to this day, period, full stop.

And so, that is the top shelf behind me that only podcast guests or virtual meeting attendees get to see if I’m not actually sitting at my computer. Except now you know what’s there and a little bit about why.

Is it inspiring? At times, but it is just a distilled amalgamation of my likes. Books, baseball, writing, and a few knick-knacks that bring a smile to my face or at least a pleasant memory to mind. I’m sure the same could be said of other shelves in my house, this just happens to be the one I shared, this time, and I hope you enjoyed this trip across the shelf with me.