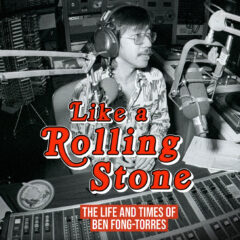 I thought about being a rock star as an early teen as if it was that easy. I also thought about becoming a journalist for a period in my late teens, which seemed much more realistic. I even minored in journalism in college, so it was definitely in my wheelhouse.

Somehow, being a rock journalist never made the list, even temporarily, of things I want to do when I grow up.

I’ve read rock journalists’ articles, books, and blogs. I’ve watched them talk about bands and culture on documentary movies and television shows. For all my interest and intrigue, even with so many signs seemingly pointing in that direction, I never went there.

When I watched Like a Rolling Stone: The Life & Times of Ben Fong-Torres, I realized that, at least in Fong-Torres’ case, a rock journalist (and editor) wasn’t just about the music – it was about the culture. 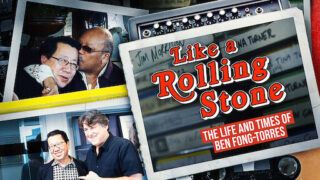 As journalist John M. Glionna says in the documentary, “Before the Internet, before blogging, before tweeting… there was the Rolling Stone. Rolling Stone was the place that young kids went for pop culture. It’s where we went for our politics. It’s where we went for the news our parents didn’t know. And it was this subversive rag that we loved. And there were superstars who worked there. And one of the nuggets was Ben Fong-Torres.”

So who is Ben Fong-Torres? If you’ve never heard of him, he was a writer and music editor of Rolling Stone magazine. He moved on from there to many other nationally published magazines and wrote numerous books. He was also immortalized by a former writer of his, Cameron Crowe, in Crowe’s movie Almost Famous.

What makes Fong-Torres so great? John Burks, Rolling Stone’s first managing editor says, “‘Tell me more’ is one of the great questions you can ask. Doesn’t even seem like a question, right? But you get people expanding on their lives, you say, ‘Oh, no kidding. Tell me more.’ Or find some variation on a way to say that. Ben is the king of Tell Me More.” 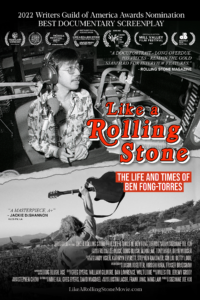 Throughout the documentary you get to hear some of those “tell me more” moments and other thoughtful questions with some of the music’s biggest stars in their own words. They’re applied to this documentary’s audio track from Fong-Torres’ massive archive of cassette tape recorded interviews.

The man himself says, “I kind of gravitated to people who were in some ways marginalized. Having come from my background helped to direct the way I went with subjects and the way stories were done.” Like a Rolling Stone establishes just why he gravitated towards them and how he understands the struggle of the marginalized because he survived it.

For fans of music, mid-century history, media, or pop culture, this documentary is a must-watch. For everyone else, it’s a wonderful different perspective on what you think you know. If you’ve only seen Almost Famous, it’ll give you a little more of the real deal behind the editor who gave a writer a chance.

Read the Secret File of technical information and quotes from Like a Rolling Stone.

Let’s finish this up now, someone is waiting for you on that.
The path of life shall lead upwards for you.
Sharing little joys offer great hope to others.
More Fortunes >