“When a down-on-his-luck basketball scout finds a potential superstar in Spain, he sets out to prove they both have what it takes to make it in the NBA.” Hustle is Rocky meets White Men Can’t Jump with more heart than you’d expect from an Adam Sandler movie, but not more than you need.

The thing about this film is that it feels like an older sports movie – like Hoosiers or Rudy or any other film from that bygone era. The Rocky comparison above is probably the one that will get tossed around most often because both films take place in the City of Brotherly Love and celebrate an unknown underdog.

But it’s not that simple. Unlike Rocky, the player Bo Cruz, played by NBA power forward Juancho Hernangomez, isn’t the only one with something to prove. Stanley Sugarman, the scout who wants to coach, played brilliantly by Sandler, also has skin in the game (though not nearly as much as the basketball-adjacent Uncut Gems). 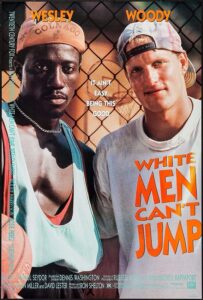 So while Rocky had a coach who wanted to bring the best out of him, Bo Cruz has Sugarman who wants to help both of them in a sort of rising-tide-lifts-all-boats scenario. The player and the coach running parallels throughout this film is amazing to see. It’s refreshing to see that the mentor isn’t the legend of his time or even a legend in his own mind.

Of course, while I will say this feels like an older film, it’s not Hoosiers either. This is about two men fighting for their future – an old man who wants to get a seat on the bench and a young man who wants to get out on the court. There is no team aspect to this. It’s just an unlikely duo fighting to achieve something each believes he has in himself.

Since I mentioned White Men Can’t Jump earlier, I would say that elements of the hustling side of street ball are there at times, but you can definitely feel the And-1 influence on the street game in this film. The style existed in 1992 when White Men Can’t Jump was released, but not to the mainstream extreme that was the And-1 explosion.

This is not an older film, though. The NBA combine, the use of social media, video calls, the prevalence of media coverage and TV personalities, modern players playing themselves – it all makes it a very current exploration of basketball. 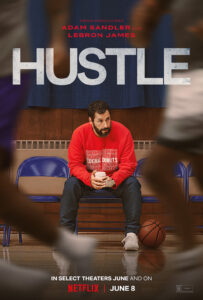 Sandler has grown into a role he could probably only play now. It’s sincere and honest, raw and still with some humor. His chemistry on screen with Queen Latifah playing his wife is great. While I don’t presume to know what Hollywood has in store for Juancho Hernangomez after his NBA career, his portrayal of Bo Cruz here is great.

And while the personalities, acting, and athleticism are all admirable, it is the writing that rises to the top. Taylor Materne and Will Fetters have penned a script that will hold up for a while.

Further, director Jeremiah Zagar must love basketball, because he captured it lovingly. This is a modern love-letter to basketball. Adam Silver, the current NBA Commissioner, must love this kind of major film from Netflix showcasing his game. Silver is all about the globalization of the game, so an unknown player from Spain being featured in a film like this is perfectly scripted for his tenure as chief executive of the NBA.

Is it a movie everyone will love? I think it could be. But if you enjoy sports in general, and not just basketball but sport, you’ll enjoy this movie.

Read the Secret File of technical information and quotes from Hustle (2022).

You are interested in higher education, whether material or spiritual.
To let another into your heart, first let yourself in.
A difference, to be a difference, must make a difference.
More Fortunes >