Field of Red Tape: ‘Our Team’ is a fantastic study of stadium ownership through the lens of the SWB Red Barons 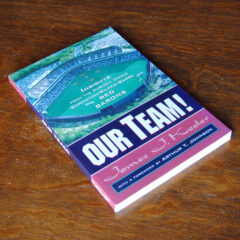 Our Team: Insights from the Publicly Owned Scraton/Wilkes-Barre Red Barons, is a brilliant case study. It reads both informationally and educationally like a complex short story focused on government, improvement, and a central question; “Should local government own the home team to protect the public’s facility investment?”

Now, before I go on, context is necessary, for both the book and for my relationship to the area. The book was published in 1999. At the time the AAA affiliate of the Philadelphia Phillies was the Scranton/Wilkes-Barre Red Barons, the featured team and regional area in this book. That team doesn’t exist anymore. In fact, the takeaway from this book has been a bit undone as well.

The previously publicly owned Red Barons are now the Scranton/Wilkes-Barre Yankees and they are – you guessed it – now the AAA affiliate of the New York Yankees. They are also no longer publicly owned. Meanwhile, the Phillies AAA affiliate is now the Lehigh Valley IronPigs.

However, the pace of business and change in government, as well as the movement of teams and affiliations, which has occurred since this book’s publication do not render the lessons and potential answers found within irrelevant. 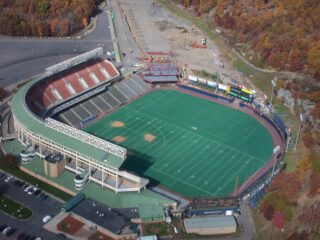 And it’s interesting that this book starts with an age old conundrum. The chicken or the egg? In this case, the stadium or the team? Further, the question about public ownership over that team is related to the fact that “more than 90 percent of the minor league stadiums in operation are publicly owned, yet there is no typical minor league stadium lease.”

This means the burden of the facility is on the community, with only loose promises of the teams’ guaranteed use of such facilities. This is not just a “minor league” issue. Sports news sections around the United States are filled with stories of franchise owners looking for public funding for stadiums to house their teams. The NFL’s Rams were once from Los Angeles, then hailed from St. Louis, and are now back “home.” The now- Las Vegas Raiders have moved around quite a bit recently as well. Out in Oakland, where the Raiders left, the Athletics are looking for a new permanent home and threatening to leave the Bay area.

So the idea proposed in this book, that government ownership over a minor league franchise can help cement the use and return on investment to build a stadium, is not without its positives. Perhaps, we’ll see it occur on a major league level at some point in the future, but it’s undeniable that these facilities and the teams that use them have an economic impact beyond the turnstiles.

Sometimes that development is slow, as is the case in Our Team. I went to Red Barons games, because I went to college in the area after this book was written. After I graduated, the retail attraction of the stadium area was closer to the plans outlined in this book back in the early 80’s than it was when the Red Barons opened Lackawanna County Stadium in April 1989. 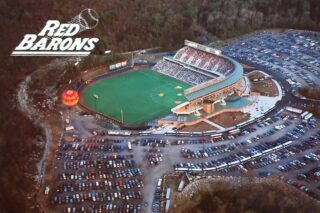 Having lived in that area, it’s always interesting to learn about the things that you didn’t know. For example, I have taken in concerts at the Montage Mountain Performing Arts Center, which was created to generate income and interest in Montage Mountain itself outside of ski season. But what I didn’t know is that those concerts were originally supposed to occur in the multipurpose Lackawanna County Stadium and that, at least at the time, they didn’t because of the threat that officials in Moosic, where the stadium is located, threatened levy a 10 percent amusement tax on the concerts.

Since the Montage Mountain Performing Arts Center is just outside of Moosic’s jurisdiction, those concerts, at least for a time, were moved to another place to avoid the tax.

It’s possible Moosic had its reasons for the threat to levy the tax, but local politics are anything but black and white. When you think about that new stadium, whether it be for the major or minor leagues, just remember that a lot goes into those negotiations and that it is never as simple as just building a stadium and your team will play. In just under 100 pages, Keeler captures the chaos and the process of navigating that chaos.

Is it worth it to your community? To look for or keep a team? This book screams yes, but it won’t be easy.