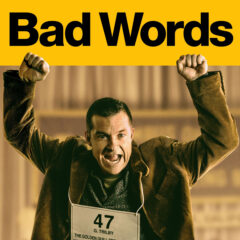 We all have those movies. You know the ones I mean. They’re those films that we are aware of, that cycle in and out of are periphery once they leave theaters. They’re on streaming services we don’t have or, maybe worse, they’re on the ones we do pay for, but we don’t have time to watch them. Any number of things can happen as time goes by and yet, we’re still adamant that one day we’ll watch that movie.

I have many such flicks, but this time, I’m writing about Bad Words, written by Andrew Dodge, directed by and starring Jason Bateman. It’s about a grown man participating in a spelling bee, due to a loophole in the rules. It’s widely considered to be a “dark” comedy, but perhaps that’s my bent, as I simply found it funny.

But I don’t think it’s for everyone. I’m not a spelling bee “fan” as it were, but I know enough to know the things that Dodge was poking fun at or satirizing or just plain exploiting from the existing Scripps Spelling Bee. The Bee in the film is not Scripps, mind you. It’s the National Golden Quill Spelling Bee.

Anyway, let’s get to the point: Five reasons to watch this film and one reason not to.

1. You are a fan of Jason Bateman.

If you are a fan of Jason Bateman, this is Bateman at his Batemaniest. Perhaps it’s because he is the star and the director, but as a vehicle, if you enjoy the man’s performances on any screen, this film is for you.

If you have a child, specifically a school-age child, then you will know that a “bee” of some kind is in your future if you haven’t already experienced one. Often it’s spelling, but I remember being in a Geography Bee at some point. The point is, to the average parent, this 89-minute film will be much more enjoyable on many levels than however long that bee you sat through for your child was… Even if they finished first! 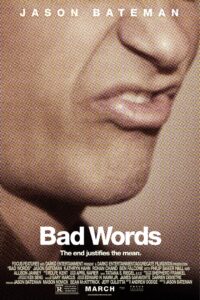 3. You were in a spelling bee.

If you were in a spelling bee or even helped put one on, as they do require a lot of volunteers, then you will enjoy the writing of this film. Bateman may take center stage as actor and director, but Andrew Dodge knows what buttons to push and how to poke fun at the practice of spelling bees.

Look, let’s be real. For a teacher, this film is cathartic because all of the stuff about the event and the children and the parents is finally happening to someone else and not you. Sit back and enjoy the movie. If you’re a teacher, you deserve at least this 89-minute break, if not far more. And thanks for doing what you do.

5. It’s just a good time if you are willing to watch something to escape.

It’s a comedy. It’s stakes are relatively low the whole way through, and given the current doom and gloom of most current events, some low-stakes comedic entertainment should be much higher on your watch list than the next “we’re all going to die” documentary.

Now, if none of those five reasons appeal to you or have given you any intrigue to even glimpse the trailer, then don’t bother, but thanks for reading this far.

For everyone else, find it on whatever streaming service you can and enjoy. Perhaps it was floating around your periphery, too. Take it from me. It’s time to finally watch it and move on. It’s just a fun 89 minutes, and isn’t that something we can all agree we could use?

Read the Secret File of technical information and quotes from Bad Words.

Let’s finish this up now, someone is waiting for you on that.
Look forward to great fortune and a new lease on life!
Good clothes open many doors. Go Shopping.
More Fortunes >