Small Oddities: A Wizard, a Trollan, a Giant, a Parody and a City Street

This edition features quite the range of artistic styles from digital art, lithograph, photography, pop art and macabre painting. It also covers themes from animated television and movies, music and parody. Without further ado here are July’s small oddities. 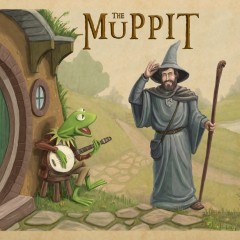 First up is The Muppit, a delightful parody of The Hobbit, with Kermit the Frog as Bilbo Baggins and Jim Henson as Gandalf, by andyjhunter. It’s a very well done and thought out mashup and as mashups go, that’s very high praise. Usually, they’re just thrown together, like taking two different things and throwing them in a blender but this is not that, this is tasteful. 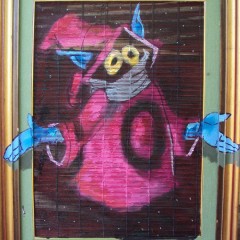 Next up is Orko, or Orco, the spelling varies depending on where you look, but according to Wikipedia, Orko is the correct spelling for this Trollan from He-Man and the Masters of the Universe. This pop art piece by h4solo is framed and appears to have been painted on some type of bamboo shade. The decision of the artist to extend the painting out of the matted space and onto the frame gives this piece a depth beyond the texture of the base bamboo shade canvas. 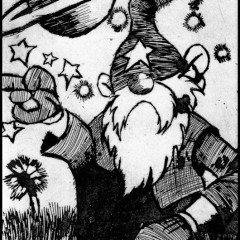 Lithographs are cool. This one entitled “Avatar’s Last Stand” by Mogwai-toejam, caught my eye, as I am in the middle of writing a Ralph Bakshi Rotospective. Usually, when I see Avatar he’s in color, regardless of the medium, so the simplicity of this black and white lithograph struck me. I also enjoy the planet and the flower as they are in striking contrast to one another and contrast is at the very heart of Bakshi’s Wizards. 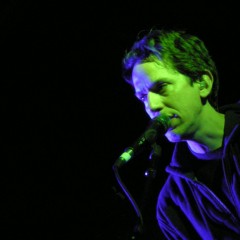 Not all photographs are worth the 1,000 words a picture can be worth, but this one of They Might Be Giants singer John Linnell in Green and Purple is. I did get to see them in concert and they are Giants! Since the first time I saw this photo, I’ve been tried to guess what song he was singing and the only three I can think of are “Bee of the Bird of the Moth” off The Else, “Experimental Film” off The Spine or “The Mesopotamians” off The Else and that’s just because he doesn’t have an accordion on and he didn’t use one on those songs when I saw him. Also, a lot of their earlier work either has an accordion or has Linnell jumping around while singing, either way, it’s a great shot by cyenu. 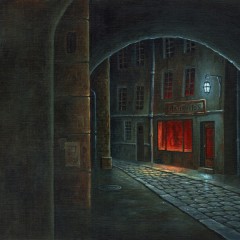 Antiquities open by night by michaelbrack

Lastly, so as to not make you think, I’m all about pop art, is a more traditional piece. It’s a painting called “Open by night” by MichaelBrack. It’s an oddity because I don’t really think of stores that sell antiquities as being open at night. Not that that’s a problem or that they aren’t open at night, I just assume that when the sun goes down, so do shades in antiquities stores.

I hope you’ve enjoyed this edition of small oddities, there is a lot of undiscovered and/or underground talent out there and it’s not that hard to find. Happy huntings!

Even the greatest of whales is helpless in the middle of a desert.
Fame and fortune are coming your way.
You are interested in higher education, whether material or spiritual.
More Fortunes >