Quake: It was great then, it is still great now!

It was great then, it is still great now. Quake, the game that went on to change the game, is still relevant today. I’m not talking about Quake 2, 3, 4 or Quake Wars, I’m just talking about the original Quake.

Whether you want to play through the single-player story or multiplayer death-match, both can still be done and are being done. 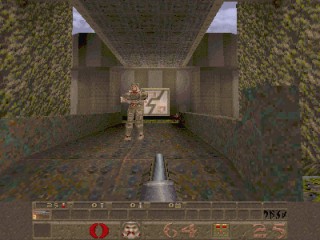 What made it different from it’s predecessors? What made Quake a game that became ridiculously popular? The first questions could be about graphics, Quake was the first game to offer full real-time 3D rendering. It could also be about multiplayer, as Quake had more options for death-matches than Doom and was heavily modded, creating Team Fortress and Capture the Flag. It could have been the levels, some of the original levels, even in the single-player mode, were just as built for death-matches as the death-match levels were. I believe the second question is answered by the first.

That’s all well and good, by why are people still playing Quake today? Part of that could be nostalgia, I still play it from time to time for that very reason. But another, more broad, reason is because Quake was a very well built game. Even the single-player can be fun on you nth run-through, whether n=2 or 100. I recently replayed the game all the way through.

I’ve never really payed that much attention to the story behind the single-player game. In the past, I ran through the levels, content to kill all in my way and move on. This time, I took note of the story. On the first page of the Quake Manual is the following:

Background: You get the phone call at 4 a.m. By 5:30 you’re in the secret installation. The commander explains tersely, “It’s about the Slipgate device. Once we perfect these, we’ll be able to use them to transport people and cargo from one place to another instantly.

“An enemy codenamed Quake, is using his own slipgates to insert death squads inside our bases to kill, steal, and kidnap.

“The hell of it is we have no idea where he’s from. Our top scientists think Quake’s not from Earth, but another dimension. They say Quake’s preparing to unleash his real army, whatever that is.

“You’re our best man. This is Operation Counterstrike and you’re in charge. Find Quake, and stop him … or it … You have full authority to requisition anything you need. If the eggheads are right, all our lives are expendable.”

Fair enough, but it continues…

Prelude to Destruction: While scouting the neighborhood, you hear shots back at the base. Damn, that Quake bastard works fast! He heard about Operation Counterstrike, and hit first. Racing back, you see the place is overrun. You are almost certainly the only survivor. Operation Counterstrike is over. Except for you.

You know that the heart of the installation holds a slipgate. Since Quake’s killers came through, it is still set to his dimension. You can use it to get loose in his hometown. Maybe you can get to the asshole personally. You pump a round into your shotgun, and get moving.

That’s one hell of a setup. One I was not fully aware of. So with that, you’re off, on the move through the first levels of the game. The starting point is a popular death-match level and is just a guide through the four episodes or dimensions that comprise the single-player game. So what is your actual goal? That is also covered in the Quake Manual,

Quake has two basic goals. First, stay alive. Second, get out of the place you’re in. The first level of each episode ends in a slipgate, these signify that you’re entering another dimension. When you complete an entire dimension (this takes six to eight levels), you’ll find a Rune and another slipgate, which returns you to the start. 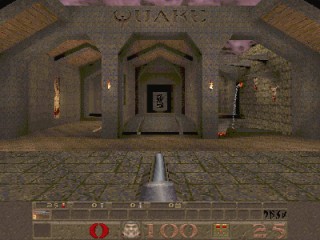 Start of the Game

There you go, stay alive and get out. The first episodes, “Dimension of the Doomed,” “Realm of Black Magic,” “Netherworld” and “The Elder World” all have their distinct levels and feel. As you play through them and collect each of the four runes the story builds. I have complied a page of all the stories should you choose to read through it.

This time, during my play through the game, I remembered all the secrets in about half the levels and at least one on all the rest. Although in single-player you may find more monsters with the extra items, so it’s not always advantageous, because you don’t know what creature is waiting for you with that extra armor.

The single-player is fun, I enjoyed it this time as I had the last time and probably will the next time. The multiplayer is great, even better when playing with other players of equal skill. 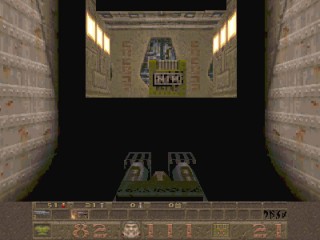 The ambient and atmospheric music is great. It adds to the game, it also added the design of the nailgun’s ammo boxes. Why? It was Trent Reznor of Nine Inch Nails who scored the game and on the nailgun ammo boxes you can find the NIN logo. In so far as I can tell, it was the first score he did, he’s done others since.

Quake, since it’s inception been, modified by countless people. The game itself, I remind you, came out in 1996 and as of right now in 2013 people are still adding to the original game. New maps and new configurations. This kind of modding wasn’t and isn’t unique to Quake, but what is is that people are still doing it.

For myself and many others, Quake has a staying power that won’t be diminished by Halo or Call of Duty. Yes, there are people that play first-person shooters and have no idea that Quake exists, and slowly it may loose some of it’s appeal, but for those of us who played it back then, we can still enjoy turning back the clock to 1996. Quake still has staying power!

Let’s finish this up now, someone is waiting for you on that.
You are interested in higher education, whether material or spiritual.
To let another into your heart, first let yourself in.
More Fortunes >