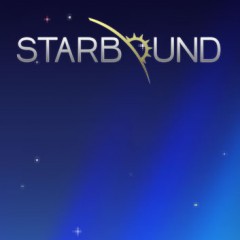 Chucklefish, the indie creators of PC-based “Starbound,” makes no reservations about what to expect when playing the beta version of their first-ever game.

Half of the fun and frustration in digging (or should I say matter manipulating) my way through the galaxies-wide sandbox game is discovering whether what I had built, earned, or stolen would be there in the morning.

Since I started playing earlier this month, “Starbound” has experienced at least one game-wiping update and another earlier this week that left many with only the clothes worn and materials carried on their backs. In fact, when I was dropped onto what I assumed was my home planet on Tuesday, I was surrounded not by the comforts of home but by three cloaked individuals swearing to cleanse, whatever Alpha sector planet I was on, of all heathens.

I took that as a threat and they didn’t last long. Had they dropped any bones, I would have decorated my new mantle with their skulls. 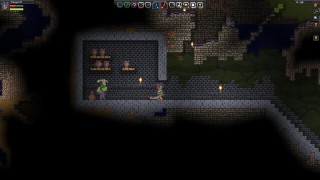 Released on Dec. 4, “Starbound,” depending on how you start and how far you get before losing your progress, is the story of one of six races of creatures – humans, birds, apes, fish-like aliens, robots, and plants. You’ve fled your homeworld only to run out of fuel above a randomly-generated planet in the Alpha sector. Planets carry a variety of hostile and peaceful wildlife elements; creatures from any of the six races; and some NPCs that operate shops tucked into the deepest, darkest corners for only the bravest explorers to discover.

The pixelated action is not quite 2.5D, but it tries like hell as the side-scrolling game forces you to think about how items like paintings, shelves, and torches are mounted to left, right, and back walls.

Your first task is simple: find your matter manipulator in your ship’s lockhold. The device is your first entry into chopping down trees, digging up dirt, or swiping doors from the first nice home you find in walking distance from where you’ve landed. Think of it as “Grand Theft Furniture: San Galaxia.” The matter manipulator allows you to destroy and place many foreground and background elements, which is an interesting concept even if some say it’s not truly original. 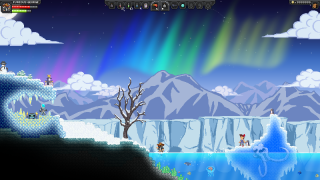 Not having ventured outside the Alpha sector yet, it’s difficult to say how broad “Starbound” truly is. But if the starting area is any indication, the possibilities in the game are endless. Before the wipes, my son, daughter, and I each had incredibly unique planets to explore. Some had trees covered in eyeballs and virtually no plant life. Others were lush with seeds and animals waiting to be pecked to death with a weak bow and arrow in the hopes of recovering some leather to craft winter-ready clothing.

For now (and presumably through the next unforeseen character wipe), I’m playing as a member of the Avian race named Komali, after the sheepish member of the Rito tribe from “The Legend of Zelda: The Wind Waker.” He’s sporting the hatchling armor set and a sword that yields about 26 HP of damage per swipe with a sweet set of threatening wings on his back taken from a dead Glitch on my new homeworld.

The game benefits greatly from the unexpected fun of exploring. I’m often thrilled to just lap around the surface of a planet to see what new blueprints, recipes, tech, and materials I can find to bring home and expand my own base. It’s equally fun to see my kids working together to accomplish goals or just close the roof of a new house, which is often the case when my son is at the helm.

Starbound has amazing graphic art within the game

Difficulties abound, however. My daughter, for example, spends more time building houses to protect her from creatures rather than battling them. She’s a lover, not a fighter, you see. When she landed on a frozen moon, the temperature drop almost killed her instantly, and I was forced to kill beast after beast through countless respawns to gather enough leather to make a helmet and pants to save her from being stuck as a pixelcicle.

There are few base missions in the Alpha sector: get your matter manipulator, cook alien meat over a campfire, build a distress beacon (SPOILER: Do so at your own, laughably poorly-equipped risk), etc., but that’s about it. Most of the fun is in finding what exists and how to get back to it using random coordinates and hand-written notes on our computer’s notepad.

Admitedly, I’m not much of a PC gamer so the early descriptions of “Starbound” as “‘Minecraft’ meets ‘Terraria'” meant absolutely nothing to me. In fact, I think the last purely PC-based game I played was some early “Dragon Ball Z” mod of a combat game at a LAN party in 2004. 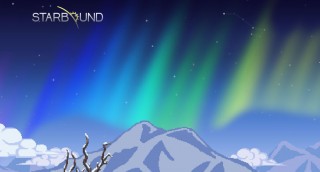 In light of my relative noob status, I’ve had just as much fun exploring the official and unofficial wikis already dedicated to the game, including the subreddit that’s loaded with image links, complaints, modding questions, and so much more. So many have already jumped into the sandbox and built their own glorious versions of what “Starbound” can, but not necessarily should, be.

I think that’s the most important thing that can be said this early on about a game this vast. On their website, playstarbound.com, the creators openly pine how “video games offer untold scope for adventure and wonder.” While it’s a little like catching lightning in a bottle, it seems – so far – that Chucklefish has ignited that spark in many of their early adapters.

Let’s hope I’m this lovey-dovey over the whole thing the next time I lose all of my progress.

Things are turning for the bright side.
To let another into your heart, first let yourself in.
Whoever wants to reach a distant goal must take small steps.
More Fortunes >