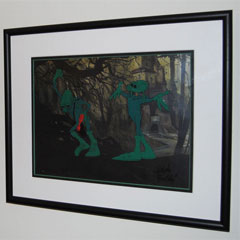 I have two walls in my home devoted to the animation of Ralph Bakshi, designated as my two “Bakshi Walls.” One is in my living room, which consists of three animation pencils from Wizards and the other is in my office, which has two actual animation cels from Wizards, so I guess you could call them my “Wizards” walls. I’m going to share with you these walls, as they are two of my favorite Geek Spaces.

The first pencil drawing, on the top, is of Elinore, the  not quite full-fledged fairy. It’s about halfway between a profile and a three-quarters view (would that be a five-eights view?). I really like this drawing because it shows her wings, which are downplayed through a lot of the movie. I’m not entirely sure which part in the movie this is from, but I’ve never tried to figure it out either. 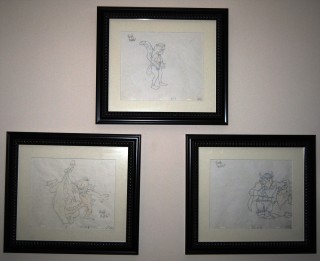 Next up, on the bottom left is Weehawk holding Larry, one of Blackwolf’s servants. “Avatar, look what I caught,” Weehawk exclaims, holding Larry up by his tail. “Don’t hurt Larry, Larry serves,” is Larry’s reply. Avatar cuts off Weehawk’s cursing of the lizards and tells him to set him free as, “it’s harmless without Blackwolf.” And the Larry is let go, set free if you will from Weehawk, but more importantly, from his service in Blackwolf’s company.

Third up and last of the pencils is a drawing of the Elf General asking Avatar for assistance in their assault on Scortch One. It is in this scene that he speaks of Avatar as a messiah, who once walked the earth curing radiation poisoning.

All three on their own are very nice pieces, but together I think they make up a wonderful space. They all remind me of different lessons from the movie. The first is Elinore, who is not yet a full fledged faerie. She still has some magic to learn, as do we all. The second is Weehawk and Larry, which is a lesson in compassion and the third is of Avatar and the General, where I’m reminded to respect my elders.

In my office on the other hand, I have two animation cels, technically three, hanging on the wall. From left to right I have Blackwolf on his pedestal and on the right I have a cel, actually two, one of each character, laid out from the famous, “They Killed Fritz” scene.

The first is Blackwolf, from what near the end of the movie, it’s really a look at one side of the conversation he has with his brother, Avatar. I know the background is just a laser copy, but it’s still exquisite to look at. 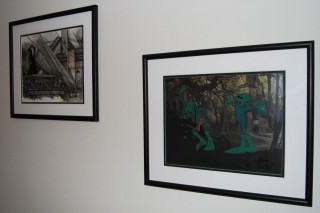 The second is actually two cels, each character has his own cel, and if you’re unfamiliar with why that is, do some homework on hand drawn cel animation. Anyway, it’s a classic scene and this snippet of it, is when Fritz gets up after Max first thinks he been killed by faeries. If you don’t know the rest of the scene, then you should watch Wizards.

These two cels remind me of even more broad lessons. The first is Blackwolf, where in all honesty, I just look at him and think that the saying “absolute power corrupts absolutely,” is there in the art as prominent as his red eyes. And the second from the Fritz scene, reminds me that we can be our own enemies.

Lessons aside, these remain treasured pieces of art that I’m happy to display. I can’t wait to expand my collection. Yes, I have other animation cels, a cel and pencil drawing of Raphael and Leonardo from the original Teenage Mutant Ninja Turtles cartoon, and I have a cel of Orko, with a hand painted background waiting to get framed, but I’m not done yet. I would like to get my hands on some more Bakshi cels and some more cels from my childhood. I’ve also been looking to get one or two from the Heavy Metal but they’re not easy to come by and very pricey.

Anyway, the one thing I wanted to do was share with you my geek space and I’ve done that, but I also hope you have an understanding that animation cels are art. So the next time you want to put something on your wall, maybe you’ll get a cel from your favorite show, instead of putting another landscape over the love-seat.

The path of life shall lead upwards for you.
Things are turning for the bright side.
Nothing in the world can take the place of persistence.
More Fortunes >