Twinkie and the Hostess Revisited: The Sweetest Comeback in the History of Ever 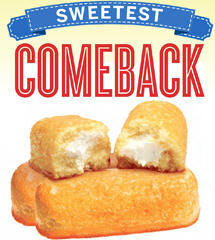 Almost two years ago, I wrote a post titled “Twinkie and the Hostess” where I lamented the loss of the Twinkie. Well, two years later, the Twinkie is back from the dead and I feel it’s time to revisit how Twinkie’s resurrection took place. It’s quite the capitalistic underdog story dubbed, “The Sweetest Comeback in the History of Ever.”

The savior of the Twinkie is, the new owner and chief executive of new Hostess Brands, C. Dean Metropoulos. He’s done this before, turning struggling brands around, with Chef Boyardee and Bumble Bee tuna. He isn’t in it alone of course, Apollo Global Management and C. Dean Metropoulos & Co.  joined together in this effort to save an American Icon. 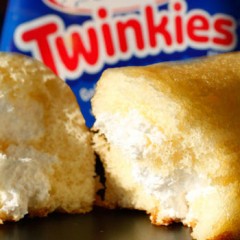 Hostess was brought back from the edge of Chapter 11 bankruptcy, but not really. Hostess did go bankrupt and in the following rebirth, the original Hostess Brands became Old HB, Inc and the organization that purchased it was New HB Acquisition, LCC and after the purchase of Old HB, Inc, New HB Aquisition became Hostess Brands, LLC. So what’s old is now new again. The business jargon of the last sentence aside, general consumers will just see that the Hostess brand, founded in 1930, is back from the dead after filing for bankruptcy twice in less than three years.

January 2012 wasn’t the only time the original Hostess company filed for bankruptcy, as they also filed in 2009 which wasn’t too long after their emergence from a 2004 bankruptcy. So why is it different this time? I don’t know that it is. The health food craze doesn’t seem to be going anywhere soon, so how long can we expect the Twinkie to last? My assumption is that the massive outcry, masked with the humor of “Ding Dong, the Twinkie is Dead,” will enable the Twinkie and Hostess to survive. 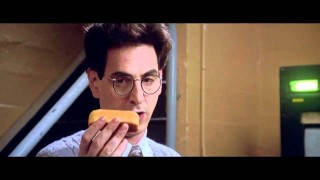 The new brains behind the operation, Metropoulos said, “Where you find a Snickers bar or M&Ms, you should be able to find a Twinkie.” With that kind of focused marketing effort, should he follow through, the Twinkie may be bigger than it ever has been.

Then again, it is well beloved and it’s more than just a snack cake in the American lexicon, most famously from the following quotes in Ghostbusters.

Well, let’s say this Twinkie represents the normal amount of psychokinetic energy in the New York area. Based on this morning’s sample, it would be a Twinkie… thirty-five feet long, weighing approximately six hundred pounds.Dr. Egon Spengler

So it’s back from the dead, again. Marketing will be as easy as cream filled cake and it’s on shelves across the United States of America, once again. Tallahassee, Woody Harrelson’s character in Zombieland can rest easy, that when the zombie apocalypse happens, there will be plenty of Twinkies to go around. What more is there to say?

Hostess Brands claims The Sweetest Comeback in the History of Ever

Egon tells Ray and Winston about the Twinkie

Twinkie Boxes Proclaim the Sweetest Comeback in the History of Ever

Tallahassee and Columbus with a Hostess Truck in Zombieland

A photo of a twin pack of Hostess Twinki

Things are turning for the bright side.
Courtesy is the password to safety.
You are interested in higher education, whether material or spiritual.
More Fortunes >