Sim City 2000: One of the Greatest PC Games and Sequel to the Sim that Started it All

Released in 1994, as a sequel to SimCity (1989), SimCity 2000 was the second in a now long line of SimCity games. It is an open-ended city-building game. It takes the strategy of simulation games and mixes in a dash of building with LEGOs, which if you think about it, is the perfect storm for a video game.

The original SimCity was released in 1989 and was very well received, not just by fans but by award givers. In 1989 alone, the year of its release, it won for; Best Entertainment Program, Best Educational Program, Best Simulation Program, Best Consumer Program, Most Innovative Publisher, Best PC Game, Game of the Year, and since has been named to all time lists and hall of fames, left and right. 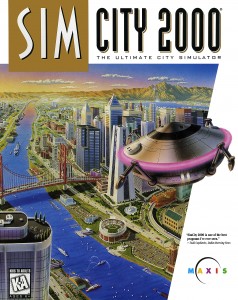 SimCity 2000, like its predecessor, also won awards and was widely acclaimed by critics and fans alike. It was also released on more systems and consoles than it’s predecessor, being available on PCs, Macs, Sega Saturn, Playstation, Nintendo 64, Super Nintendo and Game Boy Advanced.

The game premise is simple; build a city. But then again, it’s not. You are building a fully functional city that you must maintain, with tax rates and utilities, protecting it and reconstructing it from disasters. The building is simple in the outset, where are you going to put your residential, commercial and industrial areas, what kind of power plant are you going to use, etc. It gets a bit more complicated as you build an infrastructure, such as roads and rails, water pipes and power lines. Now that you’ve covered all of the basics, it’s time to let your citizens move in and build homes and businesses. 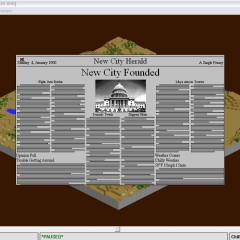 You get updates through your city’s newspaper. Are they unhappy with traffic or a lack of transportation, is there a power outage, do you need to upgrade the sewer system, is there pollution from your coal-powered power plant, do they want lower taxes, is there rampant crime, are they happy and throwing you a parade? The newspaper updates will let you know. Like Diablo that would come two years later, you could get lost for hours in SimCity 2000, which is the hallmark of a great game.

If you aren’t interested in building your own city, you can happily maintain or terrorize one of the 42 preloaded cities, or perhaps you’d like to tackle a challenge with one of the 18 scenarios included with the game. 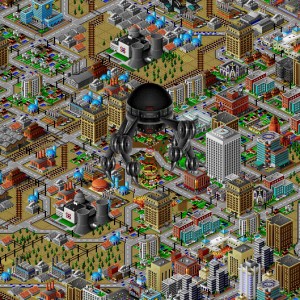 The scenarios all have varying degrees of difficulty and you may run into one or more disasters; fires, floods, earthquakes, monsters, hurricanes, etc. There are plenty of ways for things to go wrong in SimCity 2000. Keep in mind, that these disasters aren’t limited to the scenarios. The city that you build from scratch can just as easily fall victim to disaster.

There are obviously, win conditions as stated with the various scenarios, but with just a basic game, an exodus can occur as your citizens get launched into space to discover new worlds. This is very similar to Civilization in that, leaving the planet is one of the ultimate goals, but unlike Civilization, your game doesn’t end there, you can just rebuild and replace the citizens that left. However, the main differentiation between the iconic Civilization and just as iconic SimCity and SimCity 2000 is the control and detail. 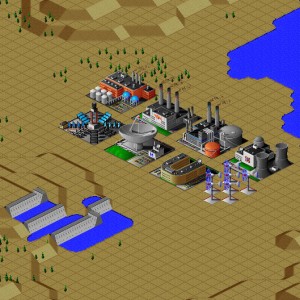 In order to have your citizens move in to your light or dense residential areas, you needed to give them utilities; power and water. Transportation to your city’s industrial areas from residential areas is key as well. Fire and police stations, jails, hospitals, schools, you need to cover all the bases to have a city become a successful population, full of happy citizens that like to throw you parades.

The additional detail and control comes from the amount of things you can build for your city. Depending on the year in your game, there are up to nine choices for powering your city, also keep in mind that those are the things you can control. There are plenty of things you can’t. You can prepare for and respond to crime, pollution, traffic, unemployment, water shortages, power outages, fires, floods, airplane crashes, tornadoes, earthquakes, monsters, hurricanes and rioters, but for the most part, something unforeseen will happen to your city, just be prepared and try to put out the flames.

That being said, there is a lot of freedom within the game. There, to this day, remains no one correct way to set up a city. If you want to put your water treatment plant next to a school, that’s your decision. If you want to put the jail next to the college, again, that’s your decision. The vast details and freedom to build the city as you see fit is probably one of the defining characteristics of the game. It was also widely played in schools, which meant this game was accessible to more people, specifically students, who didn’t need to have a computer of their own to play the game. 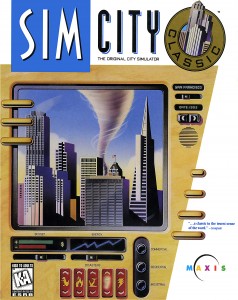 Before smartphones and handheld gaming were commonplace, generations of students played SimCity and SimCity 2000 on school computers during their school day. Depending on the student, this could be a great Social Studies lesson or just a way to let monsters run amok and destroy towns. Either way, this game was widely played in schools, as well as in homes, which only added to its popularity.

Obviously, the success of SimCity and SimCity 2000 led to the multitude of Sim games that followed; SimEarth, SimAnt, SimLife, SimFarm, SimRefinery, SimTower, SimCopter, SimHealth, SimIsle, SimTown, SimPark, SimGolf, SimTunes, SimSafari, Sim Theme Park, SimCoaster, SimAnimals and most notably, The Sims. Maxis, the company that was the force behind SimCity and SimCity 2000 is now a subsidiary of Electronic Arts (EA) and the two have continued, and probably will continue, to ride the success of SimCity and The Sims as far as it can take them.

As far as SimCity 2000 is concerned, I think it’s one of the top games ever made. I haven’t played anything in the series since; SimCity 3000, SimCity 4, Sim Societies or SimCity (2013), but I don’t need to. I’m a sucker for pixelated graphics, but with graphics being the exception, can you really make this game any better than it was back in 1994? Maybe marginally at best. They hit it right out of the park with their sequel to the original and that’s good enough for me.

To let another into your heart, first let yourself in.
Even the greatest of whales is helpless in the middle of a desert.
Look forward to great fortune and a new lease on life!
More Fortunes >