“The Ballad of Bilbo Baggins” by Leonard Nimoy a.k.a. Mr. Spock will Live Long and Prosper 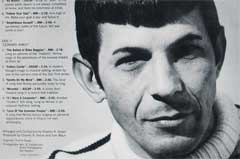 “In the middle of the earth in the land of the Shire, lives a brave little hobbit whom we all admire.” Thus starts the wonderful song, “The Ballad of Bilbo Baggins,” by Mr. Spock, otherwise known as Leonard Nimoy.

The song was recorded in 1967 for a variety series titled, Malibu U. This is amazing when you consider, it was 30 years after The Hobbit, or There and Back Again was published in 1937, it was one year after a 12-minute cartoon of stills was released in 1966, one year before a BBC Radio 4 series of The Hobbit broadcast in eight parts in 1968, ten years before  the 77 minute animated feature done by Rankin/Bass (best known for ThunderCats) and 45 years before Peter Jackson released the first movie, The Hobbit: An Unexpected Journey, of his Hobbit Trilogy.

The song itself simply does what an audio book of The Hobbit does, only it takes a little less time, just a mere two minutes and twenty-one seconds. The complete lyrics are as follows:

In the middle of the earth in the land of the Shire
lives a brave little hobbit whom we all admire.
With his long wooden pipe,
fuzzy, woolly toes,
he lives in a hobbit-hole and everybody knows him

Now hobbits are peace-lovin’ folks you know
They don’t like to hurry and they take things slow
They don’t like to travel away from home
They just want to eat and be left alone
But one day Bilbo was asked to go
on a big adventure to the caves below,
to help some dwarves get back their gold
that was stolen by a dragon in the days of old.

Well, he fought with the goblins
He battled a troll!!
He riddled with Gollum!!!
A magic ring he stole!!!
He was chased by wolves,
Lost in the forest,
Escaped in a barrel from the elf-king’s halls!!!!!!!

Bilbo (Bilbo)
Bilbo Baggins
The bravest little hobbit of them all

Now he’s back in his home in the land of the Shire,
that brave little hobbit whom we all admire,
just sittin’ on a treasure of silver and gold
puffin’ on his pipe in his hobbit-hole. 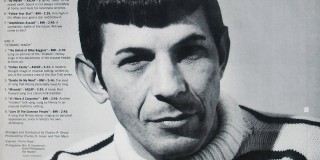 The song is a bit campy, but I still enjoy it and so does the internet. Although, I don’t know which is more campy, the song or the music video and by the same token I’m not sure which the internet likes more the song or the video, but it’s still a success.

This song was given new life in the last few years to grow on its legacy. 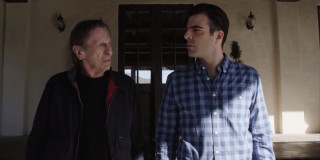 Leonard Nimoy and Zachary Quinto in Spock vs. Spock

In May of 2013, Audio released a commercial title, “The Challenge” in which Spock, Leonard Nimoy and Spock, Zachary Quinto race to the golf club. Zachary in the new Audi and Leonard in a Mercedes.

During Leonard’s journey he sings a few lines from “The Ballad of Bilbo Baggins,” which pulled the song back into the mainstream. These commercials were in conjunction with the May 2013 release of Star Trek: Into Darkness, so the commercial was run often and because it featured two Spocks, was a viral sensation.

This wasn’t the only use of the song in publicity and promotion, the cast of The Hobbit: The Desolation of Smaug also did a dramatic reading of the song for the internet around the release of their movie, the second in Peter Jackon’s Hobbit Trilogy. Second only to Leonard Nimoy himself singing it, is how Benedict Cumberbatch, the voice of Smaug, reads the song.

This song is of the seventies, as is the video, and as dated as it may be, it still lives on as a classic. It may be more mainstream now, than it ever was, but it is sure to live on for many generations to come. It appears “The Ballad of Bilbo Baggins,” will Live Long and Prosper.

Nothing in the world can take the place of persistence.
Your moods signal a period of change.
Let’s finish this up now, someone is waiting for you on that.
More Fortunes >