When ‘Captain America 3’ battles ‘Batman vs Superman,’ Everyone Wins! 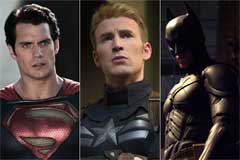 It has been announced that “Captain America 3” will share its pre-planned release date May 6, 2016 with “Batman vs. Superman.” There is also a rumor floating around that the “Guardians of the Galaxy” sequel could fill that spot instead of “Captain America 3.” Either way, it seems destined that two big Hollywood comic book-based movies could release on the same day.

This is a good thing, but that goodness has already been lost on the internet. Everywhere you look that these two movies are mentioned has become an argument for which will do better. If the stories hold true, then there will be no force in the multi-universe that can keep people from comparing the two movies to each other as well. But I stress, that this is a good thing.

First and foremost, we should be celebrating the fact that the current climate of cinema can accommodate two major motion pictures based on comic book heroes. This would have been unthinkable after the comic collapse of the 90’s (does anyone remember that?). 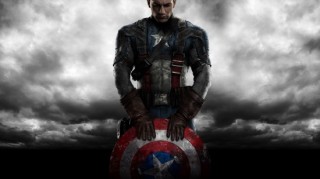 Second, the box office powers that be should be licking their chops at running a comic book movie double feature. Why let the public decide between one or the other, when they could just as well have both?

Third, when titans clash everyone is a winner!

Marvel’s immense cinematic universe is already in existence, and that will do more wonders for “Cap 3” than DC’s still incomplete universe could hope to obtain. Every Marvel movie thus far has set up the next regardless of the heroes in either of the movies. This means that even people who casually enjoy “Captain America” will watch the third installment to see how it sets up “Avengers 3” or whatever is slated to come next.

“Batman vs. Superman” has the power of two of the top superheroes in existence. The movie is rumored to be mainly about a battle between the two. It’s an on-screen portrayal of arguments that have been happening in comic shops for as long as there have been a Superman and a Batman.

But again, it’s not a contest. We’ve already won!

We, the geeks of the world, should be thoroughly enjoying the fact that our heroes have made it to the big screen and are there to stay. Two movies from opposing publishing houses coming out on the same day would have been unthinkable just a mere five years ago. But the success of Marvel’s universe building and the success of Christopher Nolan’s Batman trilogy and the relaunch of Superman has given way to a new climate in cinema. 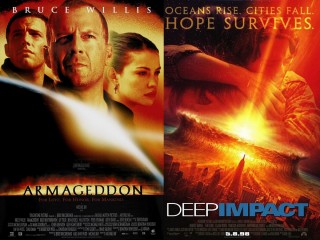 Armageddon and Deep Impact from the Summer of 1998

The other thing to consider is that these are two vastly different movies. Yes, they have superheroes in them, but the similarities stop there. This isn’t the summer of 1998 with “Deep Impact” vs. “Armageddon,” nor the fall of 1998 with “Antz” vs. “A Bug’s Life,” and it’s not even the autumn of 2006 with “The Illusionist” vs. “The Prestige” or the spring of 1997 with “Dante’s Peak” vs. “Volcano.” Now, you can argue that some of those movies are vastly different from each other as well, but for the most part, each of those couplings is more similar than “Captain America 3” and “Batman vs. Superman” will ever be.

We should be coming together, DC and Marvel fans converging on theaters simultaneously in a beautiful moment of nerdiness. It may be the first and only time it happens, but it’s much farther then we’ve gotten with the Star Trek vs. Star Wars battle.

Can’t we all just get along?

Fame and fortune are coming your way.
The path of life shall lead upwards for you.
Whoever wants to reach a distant goal must take small steps.
More Fortunes >