Why do we love March Madness? 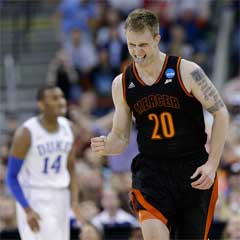 The first, second and third rounds of the 2014 Division I NCAA Men’s Basketball Tournament have come and gone. Why do we watch it with such fervor? What is it about this tournament that captures our interest and passion?

First off, some of it obviously has to do with the gambling. Running bracket pools, whether it be on big corporate sites like ESPN and Yahoo or the small office pool run by the IT department, are fun for the chance of winning a couple of dollars, billions of dollars, or the currency known as bragging rights. These brackets have become big business, but most brackets go bust by the time the Sweet Sixteen has arrived, so why do we still watch? The answer is simple.

So you’re telling me there’s a chance!Lloyd Christmas

It’s the underdog factor. Everyone loves an underdog, and everyone also likes to see Goliath fall. March Madness gives us the opportunity to root for David and slay Goliath and in the first few rounds, and we get the opportunity to see those unlikely wins go down. Now, obviously  the higher seeds are higher seeds for a reason, and the odds are normally stacked against smaller schools, but don’t tell them that. 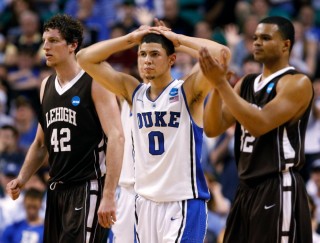 Over the last few years, #12 seeds consistently beat #5 seeds and #15 seeds have started to win big. In 2013, #15 Florida Gulf Coast went to the Sweet Sixteen. Similarly, in 2012  #15 Norkfolk State beat #2 Missouri and #15 Lehigh University beat #2 Duke, with the latter being the best of both worlds – Duke a college basketball heavyweight lost, while heavily favorited, to Lehigh University. This year #3 Duke lost to #14 Mercer, giving us another chance to watch little guy dump the powerhouse.

But there is one other reason we love March Madness. It’s the win-or-go-home aspect of the tournament. Everyone gets one shot, one moment, one game to win – or you’re done. It’s like the great Colosseum in Rome, where gladiators fought to the death, albeit a little less severe.

The great coach of the North Carolina State Wolfpack, Jim Valvano said it best, “survive and advance.” He also lead his team to an unexpected victory and championship in 1983 by defeating Houston’s Phi Slama Jama team. The championship was also won on a last second dunk by Lorenzo Charles. The 1983 tournament had a Cinderella champion and a down-to-the-wire finish: everything we love about March Madness.

But it doesn’t always matter who wins. When Duke won their last championship in 2010, they won because Butler’s Gordon Hayward missed a desperation shot from half court. The shot was purportedly off by only three inches, as it did hit the backboard and the rim.

This game isn’t always about the underdog winning. More often than not, the favorites will run away with the game and the title. Whether the upsets occur or not, as long as the little schools and the underdogs hang around to make it interesting at the finish, we’ll keep watching, because sometimes Goliaths do fall.

(Inside Sports: A Brief History and Explanation of NCAA Basketball’s March Madness)

Let’s finish this up now, someone is waiting for you on that.
A difference, to be a difference, must make a difference.
You are interested in higher education, whether material or spiritual.
More Fortunes >