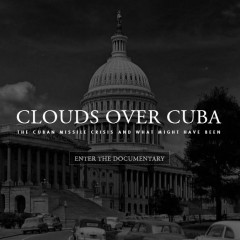 Recently, I stumbled upon an amazing documentary housed in an equally brilliant site: Clouds Over Cuba which is hosted at www.cloudsovercuba.com. It’s been around for a while and was produced by The Martin Agency.

The documentary is an “interactive multimedia documentary” of the Cuban Missile Crisis, narrated by Matthew Modine, conceptualized by The Martin Agency and created by Brian Williams, Wade Alger, Joe Alexander, and Ben Tricklebank on behalf of The JFK Presidential Library. 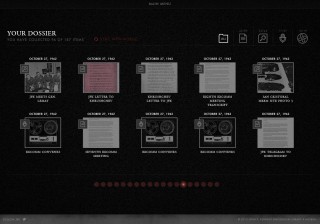 As you watch the documentary, there is a dossier with additional details and information full of videos, photos, memos, and other documents so that the user can fully immerse themselves with all of the pertinent information from the source. It’s the kind of website agents dream of. These items can be sorted by document type, and while none are necessarily essential to the overall story, they give a welcome depth to the events outlined.

The Cuban Missile Crisis was a very real and present danger while it was occurring, and it’s lesson is one that would be the main theme for the 1983 movie WarGames. This wasn’t a movie, however, and we’re fortunate that both sides worked together to make sure nuclear war didn’t happen on anyone’s home soil.

You can subscribe to a real-time calendar and the site is built with current HTML5 technology so that it is enjoyable regardless of the device you’re viewing it on, although it is optimized for landscape viewing on mobile devices.

The documentary is made up of grainy black and white footage from the time of the crisis, and the design of the site mimics that feel. This is a wonderful educational tool.

If this is what technology can do to further education about history’s events, than I can’t wait for someone to pick up where Clouds Over Cuba left off.  Future documentary sites would be wise to follow in the footsteps of this “interactive multimedia documentary.”

I consider myself a history buff because there is always something to learn from the events of the past. This site, and (if we’re lucky) future sites like it, will more than likely turn quite a few other people into history buffs, too. It does all of the heavy lifting and then gives you the blueprints.

I tend to be a snob about the expectation I have on usability for the Internet. I see too many sites that are focused on making money or displaying more ads or pushing agendas than they are on usability. In essence, there are too many sites that aren’t for users and, as such, have less than stellar usability. This site is a blueprint to all. Smarter people than I will find a way to build a site like this and monetize it, but there are ways to make money and still serve the user. 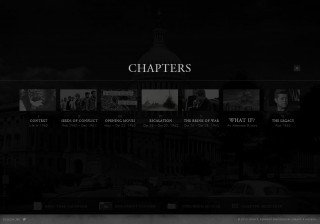 Chapter Selections for Clouds Over Cuba

This site is intuitive and is extremely user friendly, so much so that if I were a history teacher in a Middle School, I would use this site to teach the story of the Cuban Missile Crisis.

I hope that others feel this way and take to heart the amazing impact that an “interactive multimedia documentary” can have on education. Sites like Cloudsovercuba.com could better inspire the youth of the world as opposed to just words on a page. The dossier, while still essentially words on a page, provide information at the users own discretion in a digestible format.

This site is prime proof of what the new web can do, and if there are hundreds of thousands of sites like this, I’d watch them all willingly. After all, it’s not only about the story – it’s about learning and entertainment (which is not the same as humor), a combination that isn’t often found with such precision on the Internet.

This site reminds me of the original Internet, of people sharing information instead of cat videos. Maybe, just maybe, “interactive multimedia documentaries” will make up a decent percentage of the web as we know it at some point. If we’re lucky, it will also serve to inspire future generations with their stories as well.

Clouds Over Cuba: The Cuban Missle Crisis and What Might Have Been

A difference, to be a difference, must make a difference.
To let another into your heart, first let yourself in.
Even the greatest of whales is helpless in the middle of a desert.
More Fortunes >