More great artwork is to be found on the interwebs and most is done with many various techniques and skill levels, although what I have for you here is done with the most expert of skills. Photographs and digital paintings from the real to the conceptual to the fantastic. All of these pieces are what make the internet a great place for sharing and discovering art. 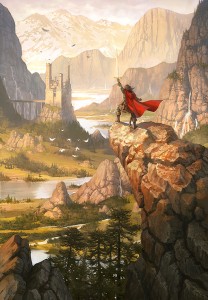 The Sword of Shannara by Luis Melon on deviantArt

There is not enough artwork for the Shannara series by Terry Brooks, so when I come across a new piece, I tend to get excited about it. This piece simply titled, “The Sword of Shannara,” doesn’t only add numbers to the small existence of Shannara art, it adds quality too.

I’m going to take a wild guess that the sword bearer is none other than Shea Ohmsford himself and without a shadow of doubt, I can tell you that the amazing structure off in the distance is, the one and only, Paranor.

The details and the talent that Luis Melo (a.k.a. LuisMelon on Deviantart.com) had to work with to create such a work is beyond words. This is one of the greater Shannara arts that is on the same level as some of the Lord of the Rings art that is out there. And why not? Shannara may not have had the blockbuster movies, but it’s still as great a fantasy series as Tolkien‘s.

That being said, there still needs to be more Shannara artwork, but Luis is taking a step in the right direction for the cause and I applaud him for it. 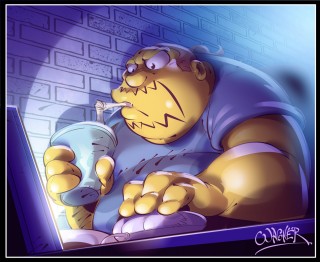 Comic Book Guy from The Simpsons by WagnerF on deviantArt

Moving on from the written word to the small screen, is Wagner’s (a.k.a. Wagnerf on DeviantArt.com) menacing look at Comic Book Guy from The Simpsons.

I may be reading more into this piece than is warranted, but the look on Comic Book Guy’s face, the grip on his drink and the mouse in his hand, makes me thing we are looking at him trolling on the internet. And he’s probably doing it in the backroom or basement of his comic book shop.

Regardless of where he is, this is what I think of when I think of internet trolls. Not people who troll casually, but people who are only on the internet to troll. That being said, I would still consider hanging this on my wall, if I hadn’t already filled them up with other piece of art. 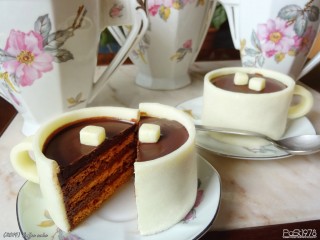 Coffee Cake by PASt1978 on deviantArt

It’s a cake made in the shape of a coffee cup and although I’m not a big dessert guy, I’m sure I’d enjoy it. I can only assume from the picture that there has to be some coffee flavor in that cake, because otherwise it would be a bit of a disappointment, but it does look really good.

More to the point, as someone who drink his coffee black with some sugar, this is what I expect coffee to look like, even in cake form and it does look truly delicious. 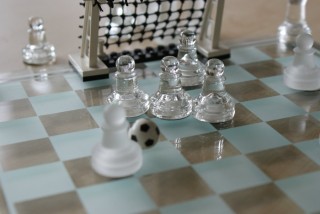 Soccer by DeinGewissen on deviantArt

The world was gripped by World Cup Fever, even in America, where the game isn’t completely understood as well as in other parts of the world. Yet, this photo title “Soccer” by Chris (a.k.a. DeinGewissen on deviantArt.com) is a very good attempt to show just how much of a chess match the game can be.

I know that’s a very literal take on the photo, but it’s probably the very reason that he took the photo in the first place.

Do I think that the pawn will score from this “set” piece? Probably not, as the skill of a pawn to bend it into the top corner and “bulge the onion bag” is probably more of a Rook, Bishop or Knight skill. It’s definitely something I would expect from a King or Queen, but from a pawn, I suspect it’s going to hit the wall and be taken the other way for a counterattack. 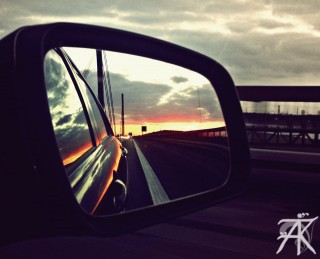 Objects in the Rear View Mirror by KatiaInsomnia on deviantArt

First off, for this next photo by KatiaInsomia on deviantArt.com, I hope was taken safely, at least I assume it was. Katia is from Germany where they drive on the right side of the road and with that in mind, this looks to be taken from the passenger side of the car.

The title of the photo, “Objects In The Rear View Mirror” is followed up by the caption “…may appear closer than they are.” Of course, this is the message we associate with rear view mirrors, although that message isn’t actually on the rear view mirror in the picture.

That being said, the contrast of the speed on the right hand side and the stillness in the image in the rear view mirror is a brilliant contrast, that as someone who drives every day, I’m sure I take for granted, although I’m sure most drivers take that for granted.

People don’t need to have talent anymore. Instagram and it’s many filters allows for people to make good photos out of complete crap, while photoshop and other programs are so widely accessible, novices take their turn at creating art.

Here are five examples of people who have a gift for the craft of telling a story through the static visual medium and they all excel at that. And foremost above everything else, it is a joy to find them on the internet, amid all of the crap that exists out there in cyberspace.

You are interested in higher education, whether material or spiritual.
Look forward to great fortune and a new lease on life!
Whoever wants to reach a distant goal must take small steps.
More Fortunes >