Before Call of Duty, Halo, Quake, Duke Nukem, and Doom, there was Wolfenstein 3D or Wolf3D for short.

In the modern history of time-travel conversations, someone will inevitably say they want to go back in time and kill Hitler. It’s a theme from dorm rooms and coffee shops to Smodcast. However, this Godfather Game of First-Person Shooters allowed you to do just that.

Created by id Software and published by Apogee Software (also known as 3D Realms) on May 5, 1992 for PC on DOS, the game was released in two versions, Shareware and full versions. It had quite the backstory and in-depth plot, although you would only know that from reading the game manual. It had all the elements we take for granted: lots of levels and little story, life packages, secret rooms, difficulty levels – the works. 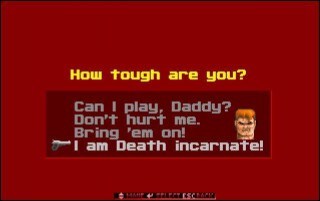 It contained four levels of difficulty, “Can I Play Daddy,” “Don’t Hurt Me,” “Bring’ Em On,” and “I Am Death Incarnate,” each being progressively harder with more enemy encounters. It also only contained four different weapons; a knife, a pistol, a machine gun and a chaingun. Along the way you can pick up keys to open doors, health, and treasure; find secret rooms full of each; and kill your enemies. 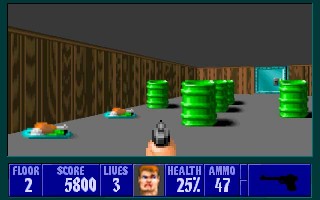 Being the basic game that it was, there wasn’t the variation in enemies that we’ve become accustomed to. There were guards, SS, and killer dogs. In later episodes those were joined by mutants and officers. There were two huge bosses within the game. Dr. Schabbs would throw syringes at you and the controversial Hitler, also known as mecha-Hitler or armored Hitler, topped the list of dispensable baddies. 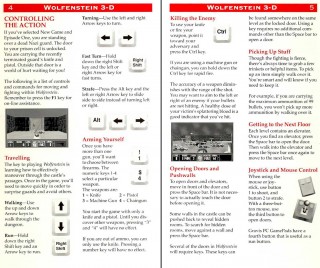 Controlling the Action in Wolfenstein 3-D

The gameplay was simple. Use the arrow keys or joystick to run through the levels, killing as fast as you can and surviving at all costs. With a keyboard, Ctrl fired your weapon and the Space Bar opened doors and allowed you to search for and open secret doors. The screen displayed the information allowing you to track your ammo, health, lives, score, and what level you where on. The health was shown in two ways, which was used in many future first-person shooters. The percentage displayed your numeric health value, but an avatar of your face got progressively more beaten to a pulp as your life went down.

Hitler, as a boss enemy, has been ranked very high in many different lists like hardest boss battle, greatest boss, best villain, and so on, but it was not without controversy. Because the game included swastikas and even the Nazi Party’s anthem “Horst-Wessel-Lied,” it was not able to be sold in Germany as a result of legislation rendering use of Nazi symbols as a federal offense.

Hitler had to beaten Twice

Some subsequent reissues of the game into various consoles were heavily edited, but the best response to the reaction about Wolfenstein belongs to employees of id Software, who stated in The Official DOOM Player Guide that it was ironic that it was morally acceptable to kill people, but not dogs. This was because the dogs were replaced with mutant rats at one point and even the enemy blood was changed from red to green.

All of that controversy couldn’t stop the success that this granddaddy had. It was highly rated and sold over 100,000 units by the end of 1993, which was a lot for a computer game released the previous May. It won “Best Action/Arcade Game” in 1993 and has since been included on best “all time” game lists. But the nostalgia factor makes it playable today and its legacy is well documented. 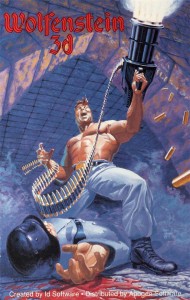 Cover of the Wolfenstein Manual

For id Software alone, Wolfenstein 3D begat Doom which begat Quake, two of the forefathers of first-person shooter that later spawned sequels aplenty. But its framework could be seen in many other shooters of that time, including Duke Nukem 3D. Wolfenstein 3D has spawned, at the moment, nine sequels and spin-offs. The game was a phenomenon that launched the first-person shooter, which makes the manner in which many of my friends and I first played the game all the more ridiculous.

For some reason, and I don’t hesitate to assume that we weren’t the only ones, the shareware version of Wolf3D was installed on our schools computers. We used to play during keyboarding class using Crtl-C and Crtl-V to copy and paste lines of text followed by using Atl-Tab to toggle between the game and the word processing program. I do not have even the foggiest idea why it was on there, but that shareware game was played by many. Those of you who did the same can no doubt remember all the secrets in the first few levels of the game. In fact, I doubt if I’ll ever forget those secrets, but it’s still mind boggling. 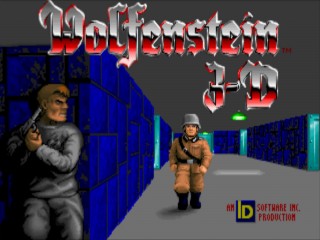 The game was successful enough as a piece of nostalgia that when celebrating 20 years of Wolfenstein 3D, it was put online, playable in your browser, featuring the first three episodes.

Wolfenstein 3D will always be the grandfather of the FPS genre. It spurred id Software and Apogee (also known as 3D Realms) to bigger and better things. It was as controversial as it was groundbreaking, well ahead of its time, and a benchmark for the genre to become what it is today.

Your moods signal a period of change.
To let another into your heart, first let yourself in.
You are interested in higher education, whether material or spiritual.
More Fortunes >