This Book is Cool. The Rat Pack: Neon Nights with the Kings of Cool 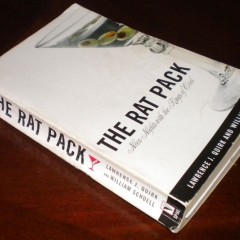 There are those among us who still maintain that The Rat Pack – sometimes called “the Summit” or “the Clan” of Frank Sinatra, Dean Martin, Sammy Davis, Jr., Peter Lawford, and Joey Bishop – are the epitome of cool. Consider me among them.

My mother, of all people, picked up The Rat Pack: Neon Nights with the Kings of Cool by Lawrence J. Quirk and William Schoell, for me at a used book store. This look into the Kings of Cool was written and published in 1998, just before the death of Frank Sinatra on May 14, 1998.

I literally couldn’t put it down.

It starts with Humphrey “Bogie” Bogart and his original Rat Pack, which was the shortened variation of “Holmby Hills Rat Pack,” which included Sinatra, Judy Garland, Lauren “Betty” Becall, Sid Luft, Bogie, Swifty Lazar, Nathaniel Benchly, David Niven, Katherine Hepburn, Spencer Tracy, George Cukor, Cary Grant, Rex Harrison, and Jimmy Van Heusen. Have I name dropped enough or did you have to look up who those people were? If you didn’t know, this may not be the book for you!

After a brief history of the original “Rat Pack,” the book goes on to introduce the individuals of last version of The Rat Pack starting with, of course, Frank Sinatra, who was the only person to be a member of both versions. These chapters not only tell the tale of Sinatra, but they also tell the tale of how he took over the original Rat Pack before embarking on making it his very own.

Following that, the book introduces Dean Martin and Jerry Lewis and does talk about their breakup, followed by the story of Sammy Davis, Jr., Peter Lawford, and lastly Joey Bishop. After all of the players are introduced, we’re off and running with the Kings of Cool, complete with their booze, broads, fame, and infamy before continuing on to the demise of the group, which the book seems to make out to be more of an implosion than explosion.

The many wives, girlfriends, and flings of this group are nothing compared to the amount of drinks they swam through in a constant state of variations of sobriety. The played Las Vegas together. Heck, they made Las Vegas what it was together. They made movies and comedy, sometimes mixing the two, and they all were fairly successful in their own right outside of the group.

They weren’t the most moral, but they were the coolest. With the exception of The Chairman of the Board, they kept their cool in the face of changing times, such as Elvis and The Beatles. And amazingly enough, they were there before and after both phenomena had run their course through pop culture.

But for the most part the only thing more interesting about these guys getting together was their falling apart, and it wasn’t overnight. Some members came and went in the good graces of Ol’ Blue Eyes, but when you were finished, you were finished.

Although, these were not the guys you wanted your children looking up to, men wanted to be them and women wanted to be with them, in spite of their excesses which were widely publicized in the newspapers and magazines of the day. And that’s just one of the amazing things to me: these guys, even with everything they did in the public eye, still managed to keep it relatively together.

The back cover of the book states that The Rat Pack “had talent, money, and power to burn. But they also had something else even more important. They had fun.” Yes, yes they did and for all of their talent, money, and power, whether they were in or out, when they were on top, they had more fun than anyone else in the universe! I understand their decline was inevitable. No one, not even “The Voice” could stay on top forever, though he clung to it more than the others.

But while they were there, together or otherwise, these guys weren’t just tops in the hearts of their fans or to the studios or labels that banked on them, they were tops in fun. Maybe not good clean fun, but it was fun none-the-less.

Are there lessons to be learned from the success and pitfalls of these guys? Of course there are. Most of those lessons can be learned from anyone who worked their way up to the top. But the lesson of having fun and keeping yourself surrounded by those in whose company you find enjoyment? Well, that’s a lesson you don’t get everywhere, but it is one that should be shouted from the rooftops.

You can’t always pick the people you work with, but when you get the opportunity to, choose those that are not only best suited for he job, but those with whom you’ll have the most fun with. After all, as far as we know, there are no do-overs, so wouldn’t it be nice to have as much fun along the way as possible? If there’s one lesson from the trials and tribulations and successes and excesses from The Rat Pack, that is it.

Surround yourself with those who make life fun, because not everyone can.