A Movie Review of The Hobbit: The Battle of the Five Armies | The Defining Chapter 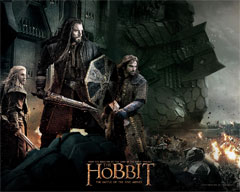 The third and final installment of The Hobbit, is more a bridge to the initial Lord of the Rings trilogy then farewell fanfare to The Hobbit trilogy, at least that’s how I see it.

There are two ways to look at this movie, as an end to the trilogy of The Hobbit or as the third act in a six part play. It’s much better overall to look at it as the latter, because of all of the extra stuff added into this trilogy to make it a bridge from one trilogy to the next.

I just can’t see it any other way.

To me, the last scene of Bilbo’s transformation from the end of the journey to Gandalf’s visit for his 111th birthday party is wonderfully done. The extraneous conversation between Legolas and his father telling him to go into the North and find a Dúnedain named Strider is, in some way, very poetic. And the extra bit of Gandalf, Radagast, Saruman and Galadriel battling the forces of Sauron makes for a very complete package, handing off the torch to The Fellowship of the Ring. 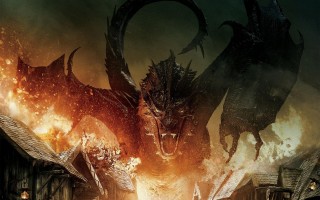 Smaug from The Hobbit: Battle of the Five Armies

As just an ending to The Hobbit trilogy, it sure does cover all the bases. Smaug is felled, although there is a part of me that was upset Bilbo didn’t get to send the thrush in to Laketown to tell Bard of Smaug’s sole weakness. The mountain is reclaimed by the Dwarves and the Battle of Five Armies rages to its conclusion, but it all seems fairly anticlimactic.

Could it be that it’s because I’ve read the books dozens of times and watched the movies, all of them, including Bakshi’s Lord of the Rings Part I and the Rankin/Bass animations? Could it be that even someone who’s only known Peter Jackson’s Middle Earth, would know that there wasn’t going to be any surprises? While, the latter may have had a shock at the death of some of the Dwarves in the party, there is still the business of what comes next and by now, everyone knows what comes next. 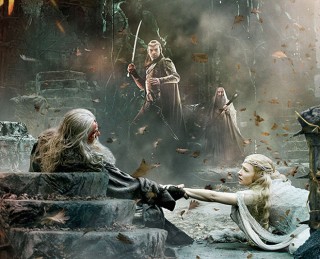 Gandalf and his holy Company of Kings, Queens, and Wizards

Don’t get the wrong idea, I did enjoy the movie, but from an entertainment perspective only. The fanboy in me, just kept thinking that maybe this would have been better as two movies, with some of the added errata held in check, instead of being a trilogy.

Unlike most, I know that a good portion of that errata, was added from the Silmarillion, both Books of Lost Tales, and Unfinished Tales of Númenor and Middle Earth. I will not complain about what did make it into this Hobbit trilogy, but I fear that although poignant to the script and what is seen on screen, it served little in the way of building The Hobbit trilogy to stand on its own and just made the third act a bridge.

Others may see it in a different light, I myself may have a different appreciation for The Battle of Five Armies, when I watch it as part of a Peter Jackson Middle Earth movie marathon. But I didn’t see it after having watched the first two Hobbit films, with the idea of running home to watch The Lord of the Rings trilogy. I watched it as a stand alone movie and as the end of a trilogy. 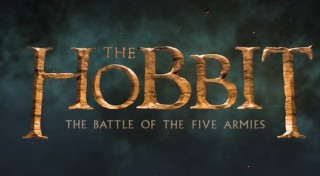 Title Screen for The Hobbit: Battle of the Five Armies

I will never be disappointed with the work that Jackson did as director, nor the homework that I’m sure he and his writing partners Fran Walsh, Philippa Boyens and others did to bring this classic piece of literature to life on the big screen. But by watching just one movie at a time and not ingesting them in a marathon, there are weaknesses to this the third installment of The Hobbit, as I have pointed out.

For The Hobbit trilogy, The Battle of Five Armies is a fitting bridge to the Lord of the Rings with a seemingly truncated ending for The Hobbit trilogy itself. But never-the-less, I applaud what Jackson has done, not only for the legacy of J.R.R. Tolkien and his works, but for his homeland of New Zealand.

Jackson has been a major part of bringing geeks into popular culture, his Middle Earth movies deserve as much credit as what Marvel has done cinematically. Now like all good things, it has come to an end. and Jackson is a legend. Howard Shore has become the second most famous composer of movie scores, still behind John Williams, but not by much. 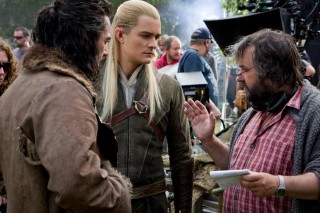 The characters of Gandalf, Bilbo and Frodo, Legolas and Strider or Aragorn (if you prefer), are in the public consciousness now more than ever and the actors who took part will be hounded by Tolkien fans forevermore.

It may not be my favorite Tolkien movie, but it could very well be the last one released in theaters and for that I am both happy and sad that the journey is over. Jackson took us to Middle Earth, he took us to a place where many of us only dreamed and after he took us there once, he took us back again…

Hmm, there and back again… That’s as good a way to end this as any.

Read the Secret File of technical information and quotes from The Hobbit: The Battle of the Five Armies.

Things are turning for the bright side.
Today it’s okay to make a few choices by going with your instincts.
To let another into your heart, first let yourself in.
More Fortunes >