The Last Superbowl by George R. R. Martin is a Science Fiction Epitaph to Sports as we Know It 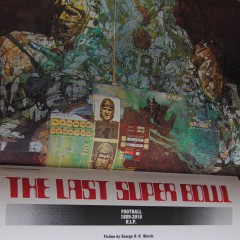 Sports are universally beloved. Geographically, the athletic competitions take on various forms; the NFL, NBA, MLB are strong in America; NHL in Canada; Premier League in Europe; and Cricket in India.

But the now legendary George R. R. Martin wrote about the downfall of them all in “The Last Superbowl,” a fantastically written short story in February 1975’s issue of Gallery Magazine, a men’s magazine.

The story is actually two tales, as he covers the last Superbowl which takes place in January 2016 and interjects the depiction of that Superbowl, between the Green Bay Packers and the Hoboken Jets, and the downfall of real sports. Real sports, in the 2016 of Martin’s fictional world, have been overtaken in popularity by simulated sports.

Simulated sports are controlled by a computer that can put any team, from any era, against any other for the enjoyment of the spectators. The technology he describes in the computers that control the simulated sports may have been a thing of science fiction in 1974, when I assume he wrote the piece, but here in the real 2015, our computers are powerful enough to create those simulations. Just look at video games like Electronic Arts’ Madden and FIFA series. 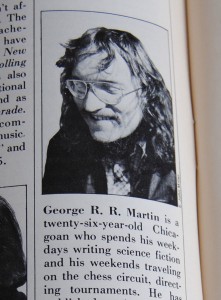 The implications that computer simulated games would overtake the real thing isn’t so far fetched now, but back in 1975, Martin was looking to a future where the complexities of computers and their power seemed infinitely abundant.

The last Superbowl – just think about it. No more National Football League, no more National Basketball Association, no more Major League Baseball, the players all replaced by pixels and simulations. The piece is entitled “The Last Superbowl” because the NFL was the last sport to fall to the computerized simulations. Martin explains that the NBA and NHL disbanded in 2010, while the MLB lasted just until 2014, with the NFL holding on just long enough to have one last Superbowl in 2016.

Why have the real leagues folded to simulations? Money, of course, which is the underlying scariest thing about this piece. The power of the media, which still exists to a certain degree, functions in Martin’s simulation to make decisions not in the interest of art or tangible implications for the cultures we live in but for profit and a healthier bottom line. These are things that aren’t science fiction, as they are now an overt fact of our society. 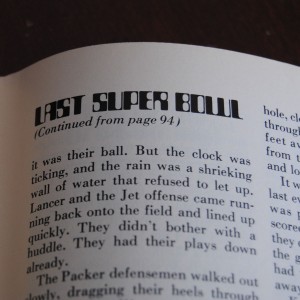 George R. R. Martin has had a resurgence of late with his epic A Song of Ice and Fire fantasy series serving as the base for the HBO adaption titled Game of Thrones. He has been writing for over four decades, starting at age 21 with a story called “The Hero,” sold to Galaxy magazine and published in the February 1971 issue.

Now, with the success of Game of Thrones, more and more people are discovering the brilliance of George R. R. Martin. His short stories, sold to various magazines and including gems like “The Last Superbowl,” prove that he isn’t a Johnny-come-lately. He’s been here all along.

“The Last Superbowl,” is a brilliant example of his early work and if you have the opportunity to pick up the February 1975 issue of Gallery, I suggest you do so. His short story is something that should be read. It weaves a tale that, as a sports fan, left me as enthralled as I was horrified. I like sports, all of it, and to see it all go away, bowing out to computer simulations, seems sacrilegious but, eerily, not too far fetched either.

Go out and find this magazine and read it for yourself. You won’t be disappointed by this master of fiction.

Sportswriters were a dying breed – The Last Superbowl

Your moods signal a period of change.
Today it’s okay to make a few choices by going with your instincts.
To let another into your heart, first let yourself in.
More Fortunes >