Funeral in Berlin is the third installment in Len Deighton’s unnamed spy series, most commonly known as the Harry Palmer series, because of the films made based on four of the books, this one included.

There are two quotes from the dust jacket that are superbly on point. First, “It is written with an acute sense of the complexities, the hard realities, of the cold war.” And second, “Funeral in Berlin is justly complicated in its story, for the world it describes is not a simple arena for heros and villains where a James Bond on a white horse conquers all, but a place of subtle shadows. 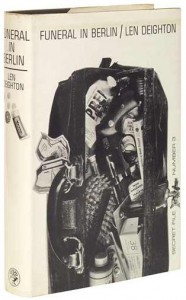 Both of these quotes are relevant to this book and many of Deighton’s other novels. The fact that most of the characters are not black or white, but are gray, blurring the lines between good and evil is part of the book’s brilliance and also part of its character.

The setting is Europe and I mean Europe; from London to Prague, a beach on the France-Spain border and both sides of Berlin, in the days before the Berlin Wall fell, when there was a West Berlin and an East Berlin.

The basic premise is simple. Colonel Stok of the Red Army Security is prepared to sell a scientist to the West. Our unnamed spy and those he works for in British Intelligence are prepared to pay, provided that the main unnamed spy is the go-between. But it soon becomes apparent that behind the planned mock funeral are lies, tactics and maneuvers of many of the players that become involved.

Additionally, 46 of the 51 chapters are started by a quote, rule or statement about chess. The five that are missing these are chapters where we are in the head of a character who is not the main unnamed spy character.

It would be easy to compare this to a game of chess between the East and the West, but it’s not. There are more than two players, playing this dangerous game and they all have a hand in how the events unfold. 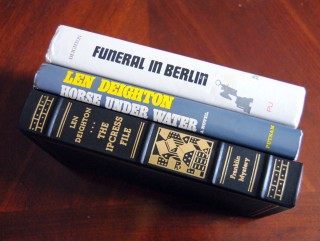 Funeral in Berlin is not just the third book in the series, it also has the unnamed spy interacting back at the home office with characters from the prior books; Dawlish, Jean and Chico all make at least an appearance.

I thoroughly enjoyed this book, as I did The IPCRESS File and Horse Under Water, but as someone too young to really understand Berlin before the wall came down, Deighton’s description of the city split in twine, is almost a history lesson from the ground level. To those old enough to remember what the differences between West Berlin and East Berlin were when the Wall was still standing, it will serve as an interesting refresher,

I do recommend that you read this after you read The IPCRESS File and Horse Under Water, because the unnamed spy does develop from one book to the next and there are faint references to the prior two books, every now and again. But what is most impressive in this book, as is the case with the other two I previously mentioned, it is the writing of Deighton that really grabs you. 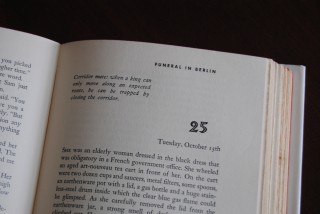 A few examples for you:

“Now don’t go metaphysical on me,” said Jean. “Whom do you feel like?”
I like that “whom”–you’ve got to pay real money these days to get a secretary that could say that.

“When men become double agents it’s just a matter of time before they lose their grip on reality. They begin to drown in a sea of confusion. Any piece of information they can snatch at will keep them afloat and alive for a few more hours.” to quote Dawlish.

“Are you a chess player, English?” he said. [Stok]
“I prefer games where there’s a better chance to cheat,” I said.

Really they were mental lightweights equipped with a few thousand items of cocktail-time small talk. They wouldn’t know a string quartet from a string vest.

“Try to make everyone happy,” I said, “and you’ll wind up a rich mediocrity; but you’ll never get anything done that is worth doing.” 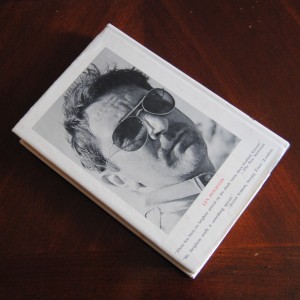 Deighton Photo on the Back cover of Funeral In Berlin

I could go on and on and on, but the point is, Deighton has a way with words and that way is marvelous. You don’t have to be completely enamored with the spy genre to enjoy any of his books, simply to enjoy the thriller genre is enough to give you an appetite and an appreciation for the stories Deighton has woven.

Sincerely, if you enjoy bond, but yearn for something a little grittier, Len Deighton’s unnamed spy series is for you. And as with The IPCRESS File, the book is vastly different from the movie, but they are both still in the same family, so that you can enjoy both, knowing they are similar, but not the same.

Read the Secret File of technical information and quotes from Funeral in Berlin.

To let another into your heart, first let yourself in.
Courtesy is the password to safety.
Let’s finish this up now, someone is waiting for you on that.
More Fortunes >