Nuclear proliferation within the Spy genre isn’t anything new, but that doesn’t make Thomas Caplan’s The Spy Who Jumped Off the Screen any less unique, because it is.

To quote the leading lady, Isabella, “It’s as though Matt Damon really were Jason Bourne…” Because that’s exactly what it is, but it’s much more deeper than that. 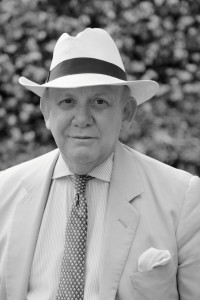 Ty Hunter, our leading man, is an former special ops military man, turned Hollywood star. He is tasked by the President of the United States in order to track down some allegedly loose nuclear warheads. He is chosen, because to state it as simply as possible, his presence, where they need him to spy, would not seem out of the ordinary for a Hollywood star, within the circles of the men that are the alleged perpetrators.

And I’m talking about Hollywood, Camp David, London, Prague, Tangier, Gibraltar, and many other points of call along the Mediterranean Sea.

Hunter is also chosen because the President is impressed with something his last commanding officer wrote about him, which was that “Hunter will do ‘fifty percent more to make a thing five percent better.’”

But he’s up against two very great men. Men whose wealth is vast and knowledge and scheming even great; Ian and Philip. Ian the mentor, who has his own theory about nuclear proliferation, which is somewhat maddening, in that he believes that if everyone has the means, no one will use them. Philip his understudy, appears to be along for the ride.

Isabella, Philips girlfriend and Hunter’s eventual love interest, is a designer of fine jewelry. With those main characters and a cast of others, The Spy Who Jumped Off the Screen, reads more like the script to a Hollywood blockbuster than it does a novel. In fact, I believe it is only a matter of time, before this book is adapted to the screen. 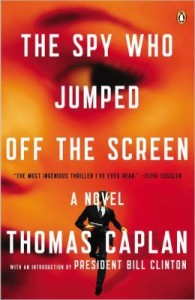 The Spy Who Jumped Off The Screen by Thomas Caplan

The dialogue is brilliant and yet a times jarring.

“Anyway, you know what they say. There are no such things as secrets, only people who find things out a little later.”

“What you fail to understand is that understatement never flourished for very long where overstatement is possible.”

“…This is not our grandfathers’ world, where the righteous and the evil retreated to their separate base camps. We live side by side in a world of very few uniforms now.”

And in one specific instance, General Cotton summarizes the dangerous technical world we live in with:

“Those kids!” Cotton exclaimed. “They never cease to amaze. When I was a boy, there was a run of films about aliens arriving on earth from outer space and taking control of all the levers of power. Some of them were so realistic they gave you nightmares for weeks. Who could have imagined that those aliens would turn out to be our own children?”

This book is everything you could want in a spy thriller and more. It involves wealth and knowledge, technology and insight, hunches and guesses. It teaches you things along the way, while the plot thickens and the characters who grow in leaps and bounds at times appear to jump right off the page. 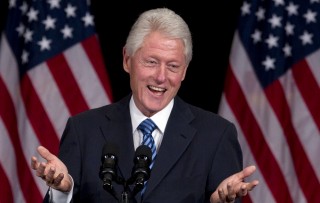 I highly recommend The Spy Who Jumped Off the Screen and I’m not the only one. The introduction by former President of the United States Bill Clinton also waxes poetic about the author, whom he has known since college, and the book, to which he received an early draft of. Aside from his time as Commander in Chief, Clinton expresses his love of the spy and thriller genre, so if you don’t take his word for it, take mine. You won’t be disappointed.

I could say more about this book, a lot more, but I won’t. I want to make sure that you, who may pick this book up on either my word or former President Clinton’s word, get to enjoy the ebbs and flows of this book unimpeded by spoilers, in a review that just gives it away. That’s not how it works. If my tease doesn’t get you interested, you won’t be. But if you are, you’ll be glad I didn’t give you anything more than the basics, because finding the twists and turns in this book on your own merit, are more than worth the wait and purchase of Thomas Caplan’s The Spy Who Jumped Off the Screen.

Read the Secret File of technical information and quotes from The Spy Who Jumped Off the Screen.