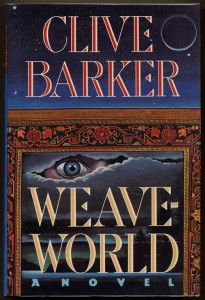 It was Clive Baker’s third novel published in 1987. It was and remains a fantasy classic. Although it may be arguable to some that something of only 28 years is a classic, this book’s revered status is beyond argument.

It’s about a slightly different history of humankind, known in this book as the Cuckoo’s, who live in the Kingdom, bred with some existing religious texts where we learn about the magical peoples known as the Seerkind who live within the Fugue.

It’s about raptures, illusions, and magic. It’s about a carpet called The Weave, a man named Calhoun Mooney, and Suzanna Parish, the woman imbued with power. It’s about Shadwell the salesman, Immacolata the Incantrix, Hobart the Law, and a power that “can’t ever die. It sleeps. It waits.”

“Nothing ever begins. There is no first moment; no single word or place from which this or any other story springs.” And that’s true.

The story Barker – ahem – weaves in this collection of pages is an entertaining and fantastical way to learn some valuable lessons, but more on that later.

The magic that Barker created is described so artfully you can almost taste it. All the characters are intriguing and unique, and no character is spared from a backstory coloring both their perspective and their part in the story. 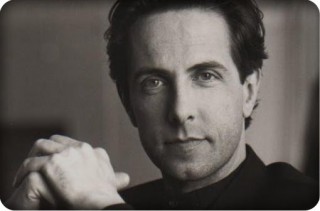 Barker’s attention to the details that matter is precise and exact. There is no description just for descriptions sake. Everything ties together and all the pieces fit.

Barker may now be a well-known and masterful writer, but this was only his third novel and it was his first real departure from the horror fiction that put him on the map.

It’s his fantasy that has always me captivated. Weaveworld, like some of his later fantasies – Galilee for example – are on a large scale, not in anything more than scope. And he pulls this off so well by not wasting words on the trivial, all the while teaching readers some lessons while characters big and small go through their trials and tribulations.

Some of my favorite quotes encapsulating these lessons are;

“Maybe letting go was the only true control.”

“Talk of power and might would always attract an audience. Lords never went out of fashion.”

“’Holy wars are easier to start than rumors, among your Kind or mine.’”

“Life and wisdom. What more could anybody ask?”

“That which is imagined need never be lost.” 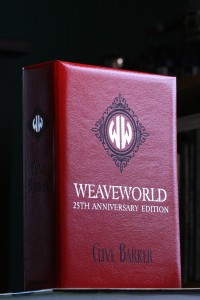 And guess what? As the characters learn, they actually grow. You can sense their change because Barker makes sure it is there. This is something that is missing from other fictional stories as it relates to how characters and we as people learn and change in the real, non-fictional world we inhabit.

In turn, as the reader you may change as well. Most of those lessons, if not all, can be applied to the logic and scrutiny of the real world we live in.

And yet there’s still more than a few brilliant stories within the text of this novel, about a world in the weave of a carpet, angels and demons, and the many creations between.

Read the Secret File of technical information and quotes from Weaveworld.

The path of life shall lead upwards for you.
Today it’s okay to make a few choices by going with your instincts.
Even the greatest of whales is helpless in the middle of a desert.
More Fortunes >