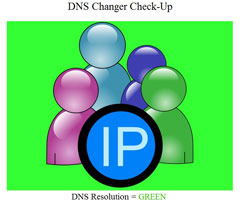 The world has been abuzz with talk of the latest threat to our society. A DNS Malware, that if unchecked could render your box of silicon chips and wiring unable to connect to the internet on Monday. Well, there is a plus and a negative to this.

First off, there is a site that will check to see if you are infected, created by the DNS Changer Working Group, go there now to launch the check tool. For the record you could have contracted the malware through facebook or Google, but who goes to those places anyway? With that said, this virus has been around since 2007. That’s five years, most of us probably had a computer infected with the malware at some point, but that computer probably isn’t in our possession anymore.

It was created by Estonian nationals. I didn’t know Estonia had nationals, much less the hacking, malware producing kind.

Lastly, to lighten the mood, if you are infected and don’t get it removed by Monday, I wouldn’t worry too much. The virus only makes it impossible for you to connect to the internet. That means this really would be the very LAST malware your machine ever sees. Then again, I may be the only person left that would have use for a computer with no internet.

I’ll leave you with that thought and this question. If you couldn’t get on the internet with your computer, would you ever turn it on? Would you even keep it?