Back in Noir: Netflix and Marvel are Back in Business with Alias Investigations’ Jessica Jones 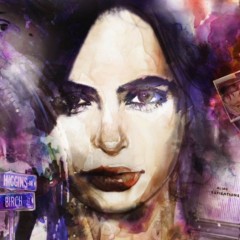 On November 20, Jessica Jones made the leap from the pages of Marvel Comics to the small screen, or any screen, with the release of her very own Netflix series.

This is Marvel’s second Netflix series which follows the success of Daredevil this past spring.

Many of the classic film noirs were classified as melodramas in the 1970’s and this series does itself a favor by joining the lot of them.

After all, one of the classic film noir tropes involves a private eye or P.I. And as a “gumshoe” Jessica knows where her strengths are, as does Luke Cage as evident by the following dialogue:

Jessica: “Breaking and entering, my specialty”
Luke: “So is punching, kicking, drinking, and talking shit.”
Jessica: “Four essentials of being a P.I.” 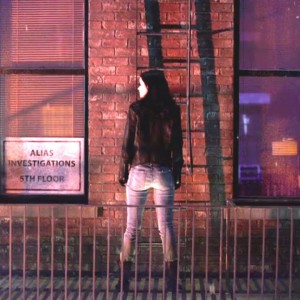 Actress Krysten Ritter plays Jessica Jones well enough, that you forget all of the other roles, forsaking your television and movie memories and supplanting herself in the mind of the viewer that she is and has always been Jessica Jones. And it was a nice touch to see her on the toilet, a place she spends a lot of time on in the comics. It’s also nice to see that despite her being on film, the character of Jessica Jones appears to hate pants as much as her comics counterpart.

As attorney Jeri Hogarth said of Jessica, “Yes, you are a paragon of mental health.” And why not? That’s who she is in the comics, or at least what I’ve read.

Personally, I’ve known about Jessica Jones for quite a while. But I’ve only read the first trade of Alias. So for me, the villain in this series, was relatively new to me. You don’t hang out in the circles I run in and not know who the villains are, but without actually reading the story arc, you only get the most generic details.

Kilgrave, also know as the Purple Man, is played by David Tennant who is fantastic in the role. Now, I am aware he played the Tenth Doctor on Doctor Who, but having not watched the show, I was able to see him as just Kilgrave and not as a former Doctor. 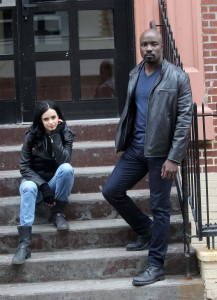 And Mike Colter as Luke Cage is great and we learn almost enough about the character to get his whole back story, but not enough that there won’t be some more introductions to him, when he get’s his own series. As for what’s next? Iron Fist, Luke Cage’s own series and Daredevil season two are on their way, that we know. When they will all get together is at this point, only speculation, but we know that they will.

At this point, I may reveal spoilers, so you’ve been warned; the plan was to warn you and I have. To quote Jessica, “Yes, it is a terrible plan and it is a complete long shot, but it’s the only plan I’ve got.”

If you haven’t watched the entire series, I may or may not spoil things after you read this sentence…

They are slight spoilers and you may not care, but I’m still warning you.

The Marvel references that exist in the series are plentiful, but my favorites are “Laser Eyes” a reference to Cyclops from the X-Men, “Flag Waiver” a reference to Captain America and last “Jewel,” along with the outfit on screen when it comes up, a reference to Jessica’s attempted “hero” past. 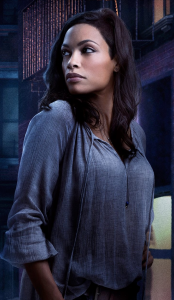 Also, apparently New Yorkers hold a grudge, because the whole “incident” still has people as up in arms about it as they were in Daredevil. And speaking of “The Man Without Fear” his personal nurse Claire Temple, played by Rosario Dawson, doesn’t really appear until the end. She is the irrefutable tie to Daredevil, that I for one, was expecting to be Matt Murdock himself.

As a twist from the comics, Claire will be the tie from Jessica Jones the character to Daredevil or at least Matt Murdock, whereas in the first trade that I read it is Luke Cage who gets Murdock to help Jessica out. These are tweaks I don’t mind. This is, afterall, a completely different universe and a “weird world.” at that.

The whole, “send a picture, save a junkie,” bit is a brilliant turn of phrase taking down another show I didn’t watch Heroes, to a place it probably shouldn’t be. As I understand it, this could just be random writing decisions, but I don’t think anything Marvel does is random. I think it was a shot across the bow, but I have no idea why they would take it. I’m sure someone out there knows, but I am not one of them.

“Selective conscious” will exist for everyone who watches the series. It is a dark and brilliant film noir and it is meant to be watched in one, maybe two sittings. This isn’t as episodic as Daredevil was. The cuts between “episodes” are so on point, that it appears Marvel learned from their audience and have basically cut the show together as one show with the credits rolling about once an hour, which are meant to be skipped, as you continue your viewing.

Overall, I applaud Marvel and Netflix for keeping this adaptation closer to the MAX comics than playing revisionist history to make it more palatable for the general audiences. Did I enjoy it? Absolutely. I just hope I don’t see the internet going to the ends of the earth to rip the series apart. I know Daredevil came first and was nearly flawless, but this isn’t Daredevil and it wasn’t trying to be. So, keep that in mind, when you read all the other reviews about Jessica Jones, of which I am sure there are many. 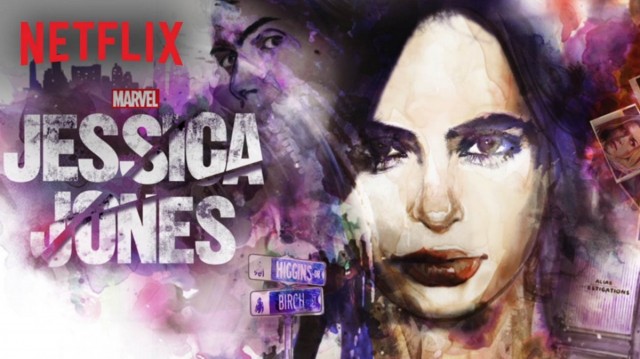 Back in Noir: Netflix and Marvel are Back in Business with Alias Investigations’ Jessica Jones

You are interested in higher education, whether material or spiritual.
Let’s finish this up now, someone is waiting for you on that.
Look forward to great fortune and a new lease on life!
More Fortunes >