This is the fifth Deighton novel I’ve read and the fifth one he had published. He’s got a style all his own that I tend to love.

In an effort to remain as spoiler free as possible, let’s judge this book based on its cover or, for that matter, its interior flap:

“In the frightening world of espionage–where good is often indistinguishable from evil and motives are as deceptive as appearances–nothing is certain but uncertainty. And in the dangerous games of the Cold War spy, in which all the rules of logic seem to fall apart, there is only one absolute–that Len Deighton, unique and inimitable, is master of the novelists who write them.”

All of this is true. As a reader, I cannot call this publisher claptrap as it just is the truth. Continuing with the interior flap:

“‘Dying in Paris is a terribly expensive business for a foreigner,’ said Oscar Wilde, but he didn’t know how expensive. Nor did he know Deighton’s Paris–the Paris of An Expensive Place to Die–with its seamy underside, its up-to-the-minute concern for Chinese hydrogen bombs, hallucinogenic drugs, institutes for sex research, blackmail, murder, and the intimate actions of glittering diplomats.”

This really whets the palate of the reader, before going on to say:

“As Deighton’s anonymous agent becomes involved in the intricacies of a bone-chilling, all-too-plausible international crisis, as he is made personally responsible for heading of an impending catastrophe–a catastrophe born in a lie told to the world by the American Government and maturing rapidly into the imminent explosion of a Chinese hydrogen bomb–he finds that his only succor lies in the rejects of the world–duty-driven fanatics, sadists, perverts, and other social misfits.” 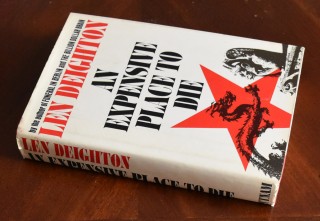 An Expensive Place To Die by Len Deighton

Now as a point of emphasis, I would like to point out that I personally do not believe this anonymous agent to be the same “unnamed spy” that was in his first four novels, which were thusly dubbed the Harry Palmer series, after the “unnamed spy” received a name in the film version of three of those four novels.

And I only have but two reasons to cite. First, in his first four books, Deighton’s “unnamed spy” has a superior in Dalby and an assistant Jean, along with a cast of other characters that accompany him. The second is that the voice of this anonymous spy sounds different than the “unnamed spy” lead character of the other books. So despite some people having written to the contrary, I believe that this is a new character Deighton created for An Expensive Place to Die.

Back to the interior flap:

“Here a reader will encounter an entire new gallery of magnificently delineated Deighton immortals, including the strange Monsieur Datt, who hawks pleasure/pain for a living, for science, for political reasons, and for kicks and who has some very unusual methods of getting to know the private thoughts and habits of some very important people: Chief Inspector Loiseau, a policeman with a special cop’s soul, who operates in the cramped melancholy offices of the Sûreté Nationale; Maria, who has kept her looks, lost her husband, and is as efficient as her male counterparts at playing two ends against a middle; and Byrd , the Englishman whose creative skill is equaled only by his talent for destruction.”

Now despite this being a very apt introduction to most of the characters, it fails to mention Jean Paul, who has just as many insights as the rest. He is an important minor character in that he gets his own chapters as well. Most of the chapters are told from the perspective of our anonymous spy, but the chapters jump points of view, giving the reader not just perspective but philosophy from the many characters and their distinct voices. 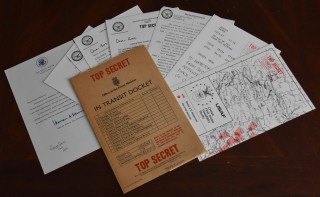 “Len Deighton is at his delectable, dazzling best in this intricate and absorbing novel. An Expensive Place to Die is an unforgettable reading experience.”

And so it is. Maybe it’s the “intricate and absorbing” nature of the book that makes it feel like a short story. But regardless, it’s a brilliantly written book that any fan of spy fiction or philosophy, for that matter, should pick up.

Since the book does take place in France, I’m sure there are little French jokes or turns of phrases that went over my head for the few lines of French that are within, but I still immensely enjoyed the book. If you pick it up and happen to know French, let me know if my lack of knowledge made me miss a wonderful quip or clue.

Read the Secret File of technical information and quotes from An Expensive Place to Die by Len Deighton.

You are interested in higher education, whether material or spiritual.
Fame and fortune are coming your way.
To let another into your heart, first let yourself in.
More Fortunes >