Only When I Laugh by Len Deighton: A Spoiler Free Book Review

There is something unique about Only When I Laugh, or Only When I Larf, in the original English printing, the first non-spy novel written by Len Deighton. It reads much more like a short story or even a short play than a novel but that’s also what makes it fun to read.

On the back of the dust cover there is critical praise for Deighton; “Deighton is tops!” says the Boston Globe, “No novelist, past or present, has done so much for international intrigue.” says Richard Condon, “A talented, droll, and original spy novelist.” says New York Times Book Review, “Deighton’s characters have depth, his settings breadth, his writing is smoothly competent and no one is better at pacing,” said Cosmopolitan, and lastly of note USA Today said, “Len Deighton is one of a handful of bestselling thriller writers who is also thought to be a good craftsman. His novels have earned him his reputation.” 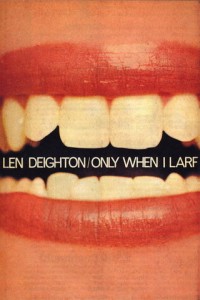 Original Cover for Only When I Larf by Len Deighton

And all of the praise is well earned. This is in fact a mystery and thriller, containing everything that Deighton packed into his previous four spy novels. The settings speak for themselves and he writes and builds real characters, not some overblown, pompous, trying too hard types, but real honest characters, despite the characters in this book being con artists who aren’t quite that honest to begin with.

Split into 18 chapters with each chapter taking on the point of view of one of the three main characters Bob with seven chapters, Liz with six and Silas with five. Each of these chapters not only move the story along, but also reveal a little more about each character until you fully understand who they are.

Even other characters, such as Mr. Awawa get into the mix of Deighton’s observations of the state of the 1960s world;

I won’t give away anything else, but the main characters and the relationships between them are expertly crafted by Deighton the master storyteller.

As a fan of his prior four books it’s hard not to enjoy this as a change-of-pace in genre but with the same attention to detail, dialogue, and commitment to story that you’ve come to expect from the Deighton. Only When I Laugh is just as good as the other books he’s written, perhaps better in it’s own unique way. So pick it up and decide for yourself.

Read the Secret File of technical information and quotes from Only When I Laugh by Len Deighton.

Today it’s okay to make a few choices by going with your instincts.
Even the greatest of whales is helpless in the middle of a desert.
Fame and fortune are coming your way.
More Fortunes >