Have you heard of Preacher? This is how I came to know Reverend Jesse Custer. 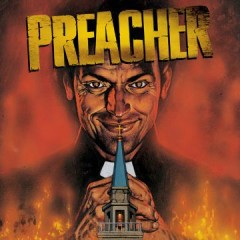 How did I come to find this comic from the 90’s? How did I end up on that podcast? Truthfully, it is all Bill Sweeney’s fault, Bill being a friend and the host and creator of The Wicked Theory Podcast.

I first learned about the comic book series by Garth Ennis and Steve Dillon on Bill’s podcast, as for a while, it was the one constant recurring theme in the first 40+ episodes of The Wicked Theory Podcast.

But that wasn’t completely what put me over the edge, it was peer pressure. Bill and I became friends and he thought it would interest me, Stefanie Muniz, another friend (who won a Wicked Theory contest and bought the books with the winnings), also enjoyed what she read in comics and told me so, as well.

Bill and Stef both have great taste and since neither had steered me wrong before, I decided to take the plunge and buy the first two books. With them in hand, I quickly read book one and half of book two before the pilot of Preacher on AMC aired. Then I just bit down and bought the remaining four books.

But the story doesn’t end there, I didn’t just read them and enjoy them, I did what seems to be my lot in life and started helping Bill behind the scenes on Preacher vs. Preacher (PVP). So, in addition to just being a refresher for Bill, as I was reading through the books, I assisted as I could behind the scenes and even made it on air for the recap of Episode 2: See. 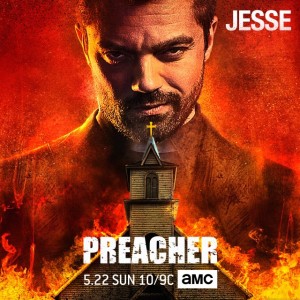 I was also on the now lost to the ether Episode 3: The Possibilities, and in between I managed to finish the series.

I loved every panel. Well, maybe not every panel but most of them. Garth’s writing and Steve’s art enthralled me. I would normally read a comic or two and then go about my day, but with Preacher it seemed that I didn’t stop reading until I hit the back cover. That’s when you know it’s great.

I have since become as evangelical as Bill, suggesting the title to other comic readers who may have missed it the first time around. Again, I don’t do this because they should follow along with the show on AMC, I do this because it is truly a great book.

So that’s the story, or at least this chapter of it. Yes, the show deviates from the comic, but Garth’s writing entranced me so much, that I’ve picked up Fury and I’ll be looking into The Boys and War Stories as well.

When you find a writer you like, you tend to see how far they’ll take you and with Garth, I’m probably going to be around for the full ride.

And it truly is all Bill’s fault, but in the best way possible. Plus with Stef in my circle, I now have plenty of people to discuss the books with as the show continues through its first season, in addition to the aforementioned PVP podcast.

But your track doesn’t need to be as complicated. You can just take the advice I took from Bill and Stef and just get the books. 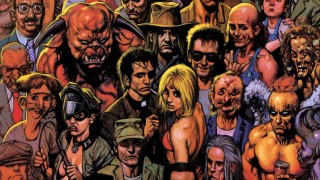 They’re great. And if you’re of a certain age, you’ll pick up on all the fun 90’s references within its pages.

Have you noticed, I haven’t given anything away? That’s on purpose. No spoilers here. Just a gleaming suggestion from not only Bill, and Stef, and the rest of the PVP cast, but from me, as well!

Things are turning for the bright side.
Fame and fortune are coming your way.
Today it’s okay to make a few choices by going with your instincts.
More Fortunes >