There was a period of time from the mid-nineties through 2013, where Ralph Bakshi had completely given up on making movies. He did some television and a few shorts here and there, but the big studio experience of Cool World, had really soured him on film of any length, type or story.

That is until the announcement of a Kickstart on February 1st, 2013 to fund “Last Days of Coney Island,” which by March 3rd had been fully funded by 1,290 backers with $174,195 raised. Later that year, on Bakshi’s 77th birthday October 29th, 2015 “Last Days of Coney Island” was released for rent on Vimeo. And then nearly a year later it was released on YouTube for free on October 13th, 2016. 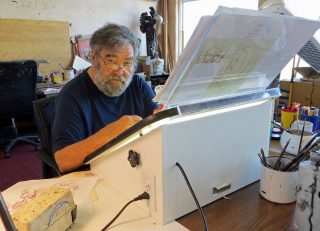 And with that, another piece of unadulterated and unfiltered Bakshi animation was put back onto the animation landscape, closing the span of nearly 20 years since his last big animation project “Spicy City” a cartoon series for HBO.

Last Days of Coney Island is a small three-act play. First we meet the characters, then we meet anti-hero, and lastly the story continues to it’s conclusion. It’s not that complicated, but it does give you a lot to think about, of course most of Bakshi’s work is simple with something to think about, too.

“My mother doesn’t love me any more…” is the first line uttered in the film. And it just goes wherever it wants from there, not unlike other Bakshi films. The official description “In the cheap glitter and glow of a fading Coney Island a group of characters live out their sordid, strange lives trying to get somewhere fast – any way they can. Desperately trying to love and be loved. These cops, call girls, mafia hoods, transvestites, fortune-tellers, clowns, and freaks are all intertwined, heading on a crazy roller coaster ride into a black hole they think is life.”

The story may seem out there, but this does take place in the sixties and I’m sure there’s at least a hint of truth from stories told and told and told over again about that time and about that place. We follow a cop named Max a cop, his prostitute girlfriend Molly, Louie his partner, and Shorty a mafia goon. Now, what parts are true and what parts are fiction? Well, isn’t that the question we ask every time we hear a story that we know has been retold? 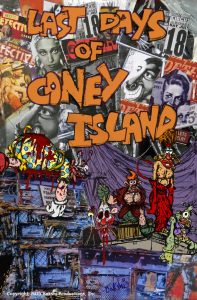 There’s a lot going on in this short, so much so that it took me a while to put the pieces together. The story is simple but it has nuances that make it feel like it’s from Bakshi’s back catalog. It has the feel of “Hey, Good Lookin’” and “Heavy Traffic” and “American Pop.”

It’s a throwback and the style is somewhat unfinished. The animation is rough and tumble and the background pieces are both detailed and abstract at the same time. Those backgrounds were mostly done by Bakshi himself and they are very similar to some of the artwork he’s been working on lately. And they should be noticed, because they pull the eyes in a way that make everything that is part of the visual aesthetic part of the story. It’s what Bakshi does. But he didn’t do it alone.

Ralph and his son Eddie share the producer credits while Matthew Modine and Adam Rackoff both served as Executive producers. Also, Ian Miller, who worked with Bakshi on both Wizards and Cool World, helped with the background art for the film. It’s not like he “got the band back together,” but to know that he’s back, if just at this level, leads most who’ve enjoyed the film to wonder “what’s next?”

Last Days of Coney Island itself is a self-indulgent, nostalgic visual trip through animation – and if it were done by anyone else it would be called that dismissively, but because it’s done by Ralph bakshi it’s a genuine throwback, because it’s what he does. The style and look wasn’t picked for it’s whimsical reminiscence of days gone by, it’s his default mode. 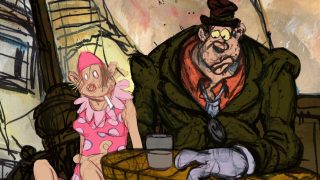 Max and Molly from Last Days of Coney Island

I would be remiss if I didn’t mention that in the film Bakshi throws in a reprisal representation of the cops, or most of the cops, as pigs as seen in some of his other animations most notably “Fritz the Cat.”

I thoroughly enjoyed the film. Partly, because it is a throwback and partly because it has a slightly “horror film” aspect to it. It is classic Bakshi, but at the same time, it’s something new. It’s also has something special, something that you can’t quite put your finger on, but that if you thought about it for a while, could be described as heart. It’s dirty and gritty and unapologetically unpolished in an artistic way. It tells the story and yet it also hints at something more. As a fan of Ralph Bakshi, I was extremely happy to see him return to animation.

The thing is when Bakshi give up the big Hollywood scene because of Cool World, he also gave up movie making in animation overall. He retreated to his house in New Mexico to paint, and while those paintings feature prominently as backgrounds, I’m sure there’s more to The Saga of Coney Island as well as other stories that we haven’t yet been privy to.

The man is a creator, it’s why during his break from film he continued to paint. He seems to need an outlet and now that’s he’s back, it would be great to get more stories from him. Bakshi is a natural and masterful storyteller, and I hope this isn’t the last we’ve seen of his work. I hope that whether it’s from Coney Island or something else, we get to see more from this master.

Today it’s okay to make a few choices by going with your instincts.
You are interested in higher education, whether material or spiritual.
Let’s finish this up now, someone is waiting for you on that.
More Fortunes >