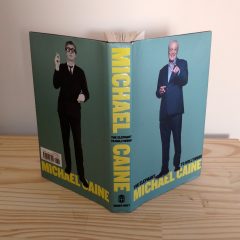 Sir Michael Caine has had an illustrious career in Hollywood. He’s won two Academy Awards, been an actor in over 160 films and television shows, and he’s the bestselling author of What’s it All About?, his first autobiography. And now he’s written a second autobiography, The Elephant to Hollywood.

Having read both of Caine’s autobiographies, I can say with certainty that there is something both regal and down to earth about the way he describes the stories of his life.

There are just some writers who can both paint the picture and make it colorful. While I’m sure it helps that he’s led and interesting life, I’m willing to go out on a limb and state that I’m sure his mention of an unfinished manuscript would be equally as gripping as his autobiographical prose.

Someone recently asked me what I was reading and I told them matter-of-factly “the second autobiography of Michael Caine.” They, of course, asked why he wrote a second. For this there are two answers. My answer is that the first book was written when he thought his career was at its twilight so he documented his path and was going to ride out his days. But he’s had a renaissance of late and tells some of the same stories with a different perspective and as well as some new stories.

His reasoning is… Well it’s all there in the prologue, but to boil it down in his own words, “There aren’t many actors whose career has spanned nearly fifty years of moviemaking–from Zulu to The Dark Knight–and there aren’t many actors who have had ‘Happy Birthday’ sung huskily and Marilyn-like into their ear by both Carly Simon and Scarlett Johansson, twenty years apart.” 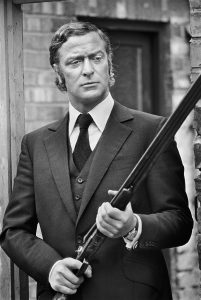 Michael Caine in Get Carter

The perspective he now displays in looking back on his career, now more in twilight than it was in 1992 when his first autobiography was published, is that of the wise old elder who’s been through it all and survived not only to tell the tale but to pass along some wisdom with the stories.

A few of my favorite takeaways from this book are the very reasons that you should pick it up, including lessons like:

“There are no heroes in war: it’s just a question of doing a job and surviving.”

“It’s a lesson in life–don’t look back, you’ll trip over.”

“Sometimes the things in life you think are bad turn out to be great.”

And of life in the 60’s London, “…where you could see the Beatles and the Stones on the same dance floor. There was a creative energy around that I don’t think has been seen before or since, and it was impossible not to be drawn in and swept along by it.”

Lastly, getting to know Michael Caine in his own words is often fascinating.

“A journalist asked me recently, during a tour for Harry Brown, which character was most like me–Alfie, Harry Palmer or Jack Carter. I said, ‘I have never played anyone remotely like me.’ He couldn’t understand that. ‘Those are all people that I knew,’ I said, ‘not people that I am.’” 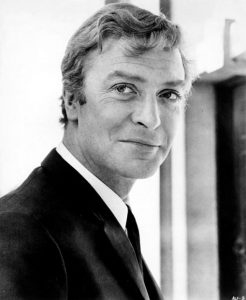 He said, “I’ve gone from Alfie to Alfred; I guess you could say I’ve become more dignified over the years.” And he has.

He also wrote, “If another script comes along that I really want to do, then I’ll take it on: if not, I won’t . I’ve always said that you don’t retire from the movie business, it retires you–and when it retires me, I tell you now, there won’t be any fanfare or public announcement. I’m an old soldier, like Harry Brown, and I will just fade away from my long public life into the embrace of my family. In the end, they mean more to me than the whole lot put together.”

Now, I may not know much, but I know there will be fanfare. Much as he may try to downplay it, Caine is a treasure the world over for any number of films. He has traveled “from the Elephant all the way to Hollywood and back. It was a tough start, it’s had some low moments and it’s had incredible highs, but it’s been a rich and rewarding journey–and it’s not over yet.”

Pick up this book – and the first one, too, for that matter – and get to know the person that Michael Caine truly is. After all, as a person, he should be treasured more than any film or role he’s played. He’s come through a lot with more style than most of us will ever have, and he truly is one of my heroes.

Read the Secret File of technical information and quotes from The Elephant to Hollywood.

Whoever wants to reach a distant goal must take small steps.
Fame and fortune are coming your way.
Things are turning for the bright side.
More Fortunes >