Rock & Rule: The Cult Classic That Never Really Was 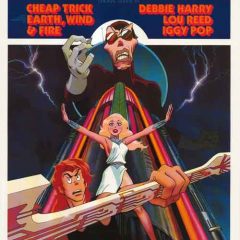 There was a time, not that long ago, where aiming an animated movie at an older audience was quite the gamble. This time also overlaps with the period where Disney was still the king of animation for feature-length cartoons and everyone else was lucky to even be mentioned…

Not everything is destined to be a hit or even lucky enough to get “cult classic” status. Ralph Bakshi, who I’ve written a lot about, has made a career of smaller independent cartoons targeted at older audiences that all have gained cult status.

Heavy Metal is a cult classic as well, but there was one attempt that didn’t fare quite as well. And while it may be a cult classic to some, it’s more of a “cult classic cult classic”. Maybe it was timing or content, or something else, or maybe it just plain wasn’t good, but I don’t think that’s really the case with Rock & Rule.

Once the film rolls, you’ve got some reading to do for the setup of the film;

“The War was over
The only survivors were animals; dogs, cats and rats. From them a new race of mutants evolved.

That was a long time ago…”

“MOK, a legendary superocker
has retired to OHMTOWN. There
his computers work at deciphering
An ancient code
Which would unlock a doorway between
this world and
Another dimension.

Obsessed with his dark experiment,
MOK himself searches for the last
crucial component- 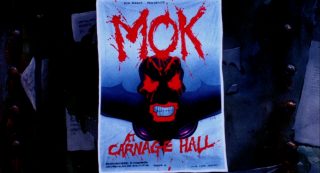 To fight a downward trend, a legendary super rocker (Mok) kidnaps Angel to force her to participate in summoning of a demon using the “Armageddon Key,” and her band must help her stop him. That’s truly all there is, and yet, there’s more to it, yet I still feel like something is missing.

In truth, the animation is good. It’s the classic organic hand-drawn stuff that I grew up with, that is perfect in its imperfection, and the music is great. I really want to love this movie, but I can’t do much more than like it.

But let’s get into some details, and really there is only one that matters and that is Mok. Mok is an evil power hungry Bowie/Jagger hybrid… Though his music is much more Bowie/Iggy Pop than Stones.

Don Francks, the voice of Mok, does a great job of channeling his inner Bowie, though the visual has a little more Jagger to it. 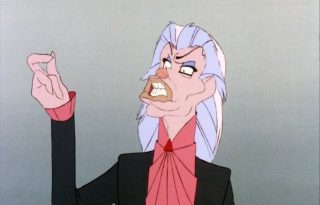 Now, it’s important to remember a few things. This movie was released on August 12th, 1983. So despite the more rock skew to the soundtrack of the film, the charts were actually filled with Culture Club, The Human League, Eurythmics, Billy Joel, Taco, Men Without Hats and Men At Work–to name a few.

It was also the first English-speaking Canadian animated feature film entirely produced in Canada. And however those two things relate or don’t, the film didn’t fare well. Earning very little of its $8 million budget back at the box office.

But the music, despite not quite being what was on the charts at the time, was great and still is. The soundtrack is as follows:

So, whatever shortcomings the film may have, it does have an excellent musical backbone.

But I can’t help but think that the famous choices to voice Mok (all denied for budget reasons); David Bowie, Tim Curry, Michael Jackson, Mick Jagger, and Sting would have added strongly to the film. None of those stars would have done this picture without leaving their own signature mark on the story too. 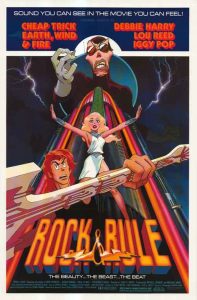 And maybe it’s fate that this didn’t do well, as the film’s production company, Nelvana, was responsible for the cult classic ten-minute animated short ‘The Star Wars Holiday Special.’

Or maybe it was the direction the film took. Originally conceived as a lighter softer story on par with a Grimm’s fairy tale aimed towards a younger audience, the story evolved darker and ended up much more adult than intended.

It’s not a bad film overall, perhaps a bit longer than it needed to be, but it still has some charm and it’s still quite fun. But I still can’t get away from my point earlier on. I wanted to love this movie, I’m just not sure why I don’t, and I still can’t quite put my finger on the beat of what it is missing.

I’m not saying you should or shouldn’t seek it out, but perhaps listening to the soundtrack first will give you an indication of whether or not you’ll enjoy the whole film.

Read the Secret File of technical information and quotes from Rock & Rule.