There are two major similarities. One, the protagonist is unnamed. Don’t get me wrong, he has a name (Pat Armstrong) but it appears that he’s just assumed that name and he’ll have to give it back at a later date. The second is that two recurring characters from those other books reappear; the Soviet KGB Colonel Stok and Dawlish, head of WOOC(P) in the former books, though we don’t get a direct title for him in Spy Story other than he is Armstrong’s superior.

Both of their first appearances were well done and out of nowhere;

“It wasn’t Marjorie. It was a broad-shouldered elderly Soviet security Colonel names Stok.”

“And there was the taciturn Mr. Dawlish, who eyed me with the steely predatory stare that I’d once known so well. He was a high-ranking civil servant who never finished his wine.” 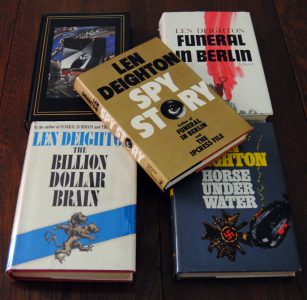 A small portion of my Len Deighton Collection

Anyway, this book has a little of everything from the original unnamed spy series within it’s pages; submarines (Horse Under Water), a dead body (Funeral in Berlin), computers (Billion Dollar Brain), and of course an unnamed spy (The IPCRESS FILE).

At first glance, it would appear that this unnamed spy might be the same one from before, but he isn’t. Though he has issues with authority, and has thought of more ways to get out of any situation than the others around him have thought to get into it, the character traits don’t totally match up and I’m ok with that.

Though the story moves from place to place and the characters surrounding Armstrong change chapter to chapter at times, it does center around the Studies Centre where “wargaming” is being done.

Here’s where I believe we’re working with a different spy and not the same unnamed one (Palmer). Armstrong appears to have settled into a life. Not quite a complete civilian one, but he has a girlfriend and even a friend at work, and he’s trying. That’s it, that’s what sets Armstrong apart from Palmer, at least to me.

But the book is brilliant. It moves fast and reading it is to take a master class in spy fiction. Why am I being so vague? Well, because I want to keep the information regarding the plot, as close to the vest and classified so as to not spoil it for any potential readers of the book. Even if you haven’t read any of Deighton’s other works, and won’t understand the connections I probably went too long discussing, this is still a great read.

And lest you think I forgot something, I did… I forgot to mention that once again, Deighton brings the serious but he doesn’t forget to sprinkle in some funny… 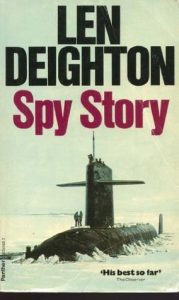 Things like:
“I didn’t get alarmed about it. You know how crazy things can sound, and then along comes a logical, rational explanation — usually supplied by a woman very close to you. So I didn’t suddenly panic, I just started to turn the whole place over systematically. And then I could scream and panic in my own good, leisurely, non-neurotic way.”

“Some of the corridor lights were dimmed from 2000 until 0700 hours in the morning. Apart from that, there was little difference between night and day, except that grapefruit segments and orange juice were on the chilled shelf for one meal in three.”

“I smiled. I was trying to master that grim smile of Schlegel’s. I am never too proud to learn, and I had a lot of uses for a smile like that.”

These are the little things that break up the serious and make Deighton a joy of spy fiction to read, because he doesn’t keep it stuffy, he keeps it moving and he keeps it light.

Get yourself a copy of Spy Story by Len Deighton. You won’t be disappointed!

Read the Secret File of technical information and quotes from Spy Story by Len Deighton.

Nothing in the world can take the place of persistence.
Look forward to great fortune and a new lease on life!
Things are turning for the bright side.
More Fortunes >