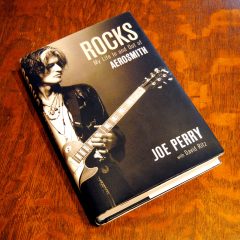 Sure, I just reread the Aerosmith autobiography “Walk This Way,” so why am I reading another book that basically tells the same story? Well, it’s because it’s a great story, one worth covering from multiple angles. Also, I wanted to know more about what happened during The Joe Perry Project years AND a little more about what happened after that first band autobiography ended which was around the Nine Lives recording…

But I wasn’t prepared for the amazing musical momentum within Joe Fucking Perry. From his early realization that “the idea that three souls sitting around a room could create this kind of a conversation without saying a word was not simply appealing, but overwhelming. I yearned to do exactly what they were doing.”

From there “Once I put together my first band, that urge never diminished. Ironically, that drive came from my father, who preached, If you want something badly and work hard enough, you can get it.” But that was just the start “It was the group miracle that I sought–the sheer thrill of three or four or five musicians conducting a raucous conversation with their instruments.”

And lucky for Joe (and also lucky for us), the four other musicians with which he eventually came together, within this group miracle, were none other than Brad, Joey, Tom, and Steven Tyler, also known as the members of Aerosmith.

For as great a storyteller as Joe is with his guitar, the man can wield a pen, to be sure.

Whether consciously or unconsciously, Joe starts the book as he should with his own origins. But in the lead up to his eventual fallout with the band, he glosses over mentioning them but not in-depth, the early stories of the band that are covered in much greater detail in the other book. And for that I’m thankful, not that I wouldn’t have enjoyed reading them again, but it gives you much more of Joe’s story than just the band’s which is what an autobiography should be, even if you are in one of the biggest bands on the planet! 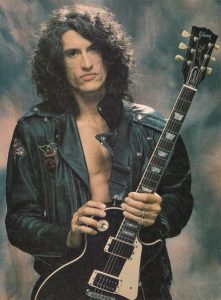 Also, the beautifully poetic nature of the introduction written by Johnny Depp was quite a treat as well. So, back to the meat and potatoes of the book; from Joe Perry in his own words;

“When I decided to write this book, I had no idea what it would take out of me. Yeah, it was cathartic, and I learned a lot more about myself, human nature, and life in general, but mostly I got a chance to get down on paper, as close as I could, what turned out to be an adventure I absolutely had no idea was in store for me.”

The thing is, not only did I learn more about the Joe and Steven dynamic, but it is revealed in this book, the differences musically between those two and not the similarities, are what make Aerosmith what Aerosmith is.

There are many kinds of brothers, from Cain and Abel, to the Marx Brothers, to Orville and Wilbur Wright. There’s good and bad blood among brothers, love and jealousy, compassion and resentment, and every other emotion in between. I have no doubt that, in a deep and abiding way, Steven Tyler is my brother. Together we have forged and maintained a great band, together we have changed each other’s lives. Our stories are intertwined.

“In our own camp, the friction between Steven and me never stopped. After every show, the dressing room became the battleground. Tom, Joey, and Brad would watch as we went at it–Steven the perfectionist versus Joe the anarchist. Ironically, our contrary energies gave Aerosmith the edge over many other bands. But that knowledge didn’t take the sting out of the fights.”

Also, by comparison to the band autobiography, there’s much more studio and song creation talk in this book. He goes into further detail about recording and songwriting than any other music biography I’ve ever read. From his belief that “every instrument has secret sounds buried within it. My job was to find those sounds” to the fact that “as the great blues prophet John Lee Hooker once said, ‘If it’s in him, it’s gotta come out.’” Joe spares no details.

As an example, “to shake things up, I listened to ‘Rag Doll,’ from Permanent Vacation, backward and, strangely enough, began developing new chords that turned into ‘Don’t Get Mad, Get Even.’”

All of this carries weight both in Aerosmith and in The Joe Perry Project. Within both frameworks and out into his other collaborations is Joe’s journey, which is more than a million-to-one shot that he’s made two or three times.

First actually hooking up with Aerosmith, second being a part of a band of addicts that actually got clean and stayed clean, something that was unprecedented at the time and third, the return of Aerosmith to the top of the charts.

This isn’t just another rocker autobiography. It’s an inspiration and one that should be read by any music fan, not just by any Aerosmith fan. That said, if you want to remain in the dark, where your brain forms the image of Steven Tyler slinked over Joe Perry during a concert as two of the closest brothers you’ll ever see, this might be a book to skip if you don’t want that image ruined in your mind’s eye.

Read the Secret File of technical information and quotes from Rocks: My Life In and Out of Aerosmith.

Sharing little joys offer great hope to others.
Nothing in the world can take the place of persistence.
Look forward to great fortune and a new lease on life!
More Fortunes >