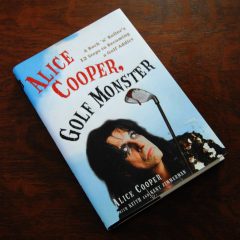 Alice Cooper has multiplatinum albums along with a sustained rock career, plenty of newspaper column inches attributed to him, a syndicated radio show, and he’s done countless interviews, but to really get to know him you have to grab your clubs and join him on the golf course.

Second to that, reading his autobiography “Alice Cooper, Golf Monster: A Rock ‘n’ Roller’s 12 Steps to Becoming a Golf Addict” is also a great idea for fans of his music, his vaudevillian shows, or his golf game.

The man, once named Vincent Fornier, now legally Alice Cooper, has been rocking for more than four decades and in that time he’s not only become a household name, but he’s stopped drinking, found redemption, become quite the golfer, and run in some of the upper echelons of celebrity. As Alice says, “If rock ‘n’ roll made my life, then golf saved my life.”

This book not only chronicles his life from childhood to stardom, his rehab and his current addiction to the gold monster, but his drive for fame, his interaction with the biggest celebrities on Earth, and his quest to become a better golfer.

I don’t think it’s a coincidence that most rock biographies, written by the artists or otherwise, are amazing stories. Not everyone is a rock star, so their rise to the top and their struggles or adversities to stay there are always going to be compelling and Alice Cooper’s journey is no different.

For a man whose three biggest compliments are: 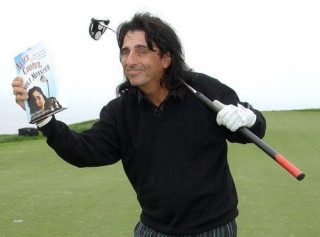 Alice Cooper is a man of the world. His art has transcended music’s harshest critic; time. The man who once said, “We are the group who drove a stake through the heart of the Love Generation,” and “I’ve got a Peter Pan complex with a Captain Hook personality,” is now playing golf as the celebrity to get paired with.

This is not at all a fluke. The man was a Friar, in the days when old showbiz greats like Groucho Marx, Frank Sinatra, Bob Hope, and others were still living life to the fullest, albeit at advanced ages.

And the miraculousness of his longevity is not lost on him. “We were all riding a huge wave of celebrity. I could go anywhere in the world and people would recognize me. We felt immortal. Yet in the back of our minds, we knew we couldn’t live like that forever. It could end at any time, so we’d better party hard and love each night like it was our last. And for some of us, it was.”

Because “Growing older was something none of my rock ‘n’ roll peers saw coming. We were kids when we first got into this game, and nobody expected to live to see the light of middle age. In fact, with the drink, drugs, wine, women, and song, none of us even saw middle age coming.”

And given the longevity of his still continuing career, Alice Cooper has seen a lot change within the music industry and as a spokesperson for Callaway Golf, he’s seen just as many changes in the game he loves.

That’s one of the more amazing things about this book, is that he not only tells his story, but the story of how things changed around him, both within music and within golf.

On the music front, he comes “from that unique first generation of arena rockers who are still playing the same music we played when we were eighteen or nineteen–and it still works, which is weird. That won’t happen again, and I’ll tell you why: Twenty-year-olds in rock bands are finding their careers cut short by the time they reach their thirties. Either the band breaks up or their short-attention-spanned audience loses interest.” 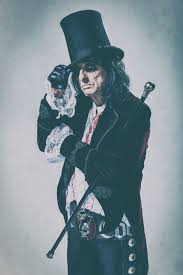 And on the golf front, he’s seen how technology has changed the game and made it more accessible. And it all comes back to golf. Everything. He’s not shy about feeding his Golf Monster addiction, which is why the book is titled Golf Monster.

But even though he’s traded in his drinking for a golf addiction, it’s not the only addiction he has. Over the course of his life he’s collected a list of his addictions; Alcohol, Golf, Horror movies, Televisions, TV shows and trivia, watches, shopping, and really bad Kung Fu movies.

And he speaks to them all. He writes in such an easy going manner, that you would presume he’s this easy going most of the time. He just comes off the page as a genuinely good guy. And that’s not an act.

He sees “the world as a place in sore need of a massive shot of not only morality, but also satire, and as long as Alice is willing and able, I will continue to take shots at the absurdity of the world through my music.” And though he’s changed his name from Vincent Furnier to Alice Cooper, he acknowledges at several points that Alice is his alter ego. Though the name’s the same, the character is not.

Throughout the great stories about Alice and Elvis, or Sinatra, or Groucho, or John Belushi, or Keith Moon, or even Raquel Welch to name a few, he gives you plenty of tips to improve your golf game, if you have one.

For fans of rock and fans of golf, this book, Alice Cooper, Golf Monster: A Rock ‘n’ Roller’s 12 Steps to Becoming a Golf Addict is a must have for your library. It’s a thoroughly enjoyable read, that I’ll be holding on to in case I ever do pick up golf.

Yes, it’s that informative, but also it is just that good of a read.

Look forward to great fortune and a new lease on life!
Today it’s okay to make a few choices by going with your instincts.
Nothing in the world can take the place of persistence.
More Fortunes >