“Setting forth on a tightrope trail of violence, betrayal and danger, Archer moves into worlds within worlds of intrigue. The British Resistance, wealthy collaborators, high-level scientists, German army and SS factions in vicious rivalry, a beautiful American reporter on assignment for the still-neutral papers backhome–these are the players in Deighton’s treacherously shifting drama, as it races toward its shattering climax that involves the fate of the King, and of England itself.” 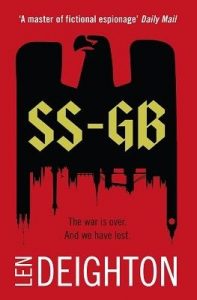 That description says almost everything you need to know about SS-GB. Although, it doesn’t quite cover it’s lead Douglas Archer, the “famous Archer of the Yard, Britain’s young master detective, who has been described as ‘the Sherlock Holmes of the nineteen-forties.’” And who is the heart and soul of this espionage thriller?

Archer, along with his partner Harry Woods, “a policeman of the old school, scornful of paperwork, filing systems and microscopes,” start out on the case of a murder. But with the SS and German Army vying for power, and his new boss Standartenfuehrer Huth and his current boss General Kellerman battling their own internal struggles, Archer’s job isn’t about to get any easier as the underground British Resistance comes into the fold as well.

This book is a masterclass in alternative historical fiction, and don’t let anyone tell you that the what ifs within the book are together greater on a whole than the greatest what if of the Germans winning the war.

Yet there is heart and belief and love in this book, all of it being realistically questioned at almost every turn. Reason gives way to unreason, only to give way to reason once more. There is also strength, weakness, trust, hope, and doubt in equal measures.

All of it mixes into a strange concoction of this chilling tale that has to be read to be believed. It is not hard for me to imagine why there have been radio-dramas, movies, and television shows based upon this novel, but having neither seen nor heard any of them, I can say that the original source material lives up to the hype of such a reproduced piece of art.

The end of the inside flap of the dust jacket reads “SS-GB is fascinating in its premise, utterly authentic and convincing in its detail. It is the most gripping novel we have had from the author of The Ipcress File, Funeral in Berlin, and Bomber. Already, in England, it has become Len Deighton’s greatest best seller.” And while that was written on the cover of the first American Edition from 1979 it still rings true.

While I still think Bomber and the Harry Palmer series are wonderful reads, this one is chilling in its authenticity of what could have been, and in that regard, it truly is one of Deighton’s masterpieces. Go and get yourself a copy, and may you be safe and not get “caught in the cross-fire.”

Read the Secret File of technical information and quotes from SS-GB by Len Deighton.

Your moods signal a period of change.
Even the greatest of whales is helpless in the middle of a desert.
Look forward to great fortune and a new lease on life!
More Fortunes >