The Unknowns of Earth: A Book Review of Return to Earth by Buzz Aldrin 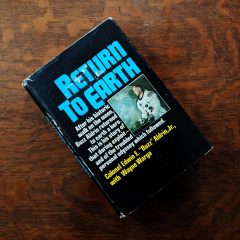 Completing my read of Return to Earth by Buzz Aldrin and Wayne Warga also completed my own personal Apollo 11 trilogy of biographies/autobiographies of the three brave men who made that first trip.

What sets Aldrin’s book apart from the other two, is that while it tells his story it focuses more on feelings and his eventual spiral into, and battle with, depression. It overall is just as candid as Collin’s Carrying the Fire albeit more personal.

He starts the book with splashdown and proceeds to spend the first part of the book on the world tour the three Apollo 11 astronauts took with their wives to build goodwill for NASA and to celebrate the accomplishment “for all mankind” with all of mankind. His details are such that it is hard not to start to feel sorry for these guys, mainly pilots and scientists/engineers, who became overnight celebrities.

“The voyage to the moon was conducted with nearly half a second of the flight plan. Of all the various midcourse corrections it was possible to make en route to and from the moon, we had used only two. The training and preparation was such that even the unfamiliar surface of the moon was very nearly what we had been led to expect. I realized I wasn’t in the simulator and it was a good bit more real, but virtually nothing was unexpected. The extensive studies and preparations were that good.“ 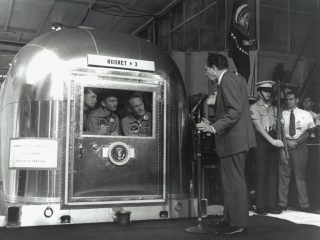 While the mission was achieved with almost absolute perfection because the training was good, what followed splashdown was not as prepared for. “It would take a couple of years for it to become clear to me, but that day on the USS Hornet was actually the start of a trip to the unknown. I had known what to expect on the unknown moon more than I did on the familiar earth.”

This unknown was not the only thing that set Buzz on a trajectory for a battle with depression, but it certainly didn’t help. Another setback for Buzz was his success. Every goal he set for himself was a goal that he eventually accomplished.

After all the goals were completed, including setting foot on the moon, Buzz “was suffering from what the poets have described as the melancholy of all things done.”

Subsequently, Buzz’s candid nature with which he describes his feelings, and his depression, are a welcome change which humanizes him in a way more so than the other astronauts that have since been hero-worshipped… “I suppose the portrayal we received in Life and subsequently in nearly all the media helped the space program a great deal. Unfortunately, nearly all of it had us squarely on the side of God, Country, and Family. To read it was to believe we were the most simon-pure guys there had ever been. This simply was not so. We may have regularly gone to church, but we also celebrated some pretty wild nights.“ 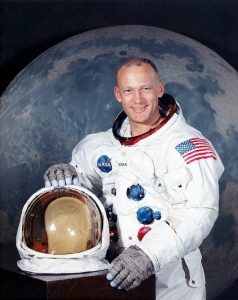 His relationship and career, as well as his self-image, all went through turbulence upon his return to Earth, such that this book may be more inspiring because of his ability to overcome such turbulence than it is because he was the second man to set foot on the moon.

With this book, Buzz “had two intentions. I wanted it to be as honest as possible and to present the reality of my life and career not as mere fact but as I perceived the truth to be. The second and more important intention was that I wanted to stand up and be counted.”

And he has, but he has also done more to further his own “devout wish to bring emotional depression into the open and so treat it as one does a physical infirmity.”

None of it was done with luck if you asked Aldrin; “I trusted nothing to luck, because luck was noticeable by its absence. So was fate. My feeling was that if I went down the hall to go to the bathroom, luck and fate would get together and see that I left the bathroom with both my shoes wet.”

It is a good thing that Buzz has a sense of humour and used it to write this book, Return to Earth. If he had not, the weight of the stresses, pressures, and depressions would probably depress the reader. But this is not the case, and I can heartily recommend this book. And if you’re feeling up to the challenge, why not also read through the autobiographies/biographies of the Apollo 11 Trio? First Man: The Life of Neil A. Armstrong by James R. Hansen and Carrying the Fire: An Astronaut’s Journeys by Michael Collins. 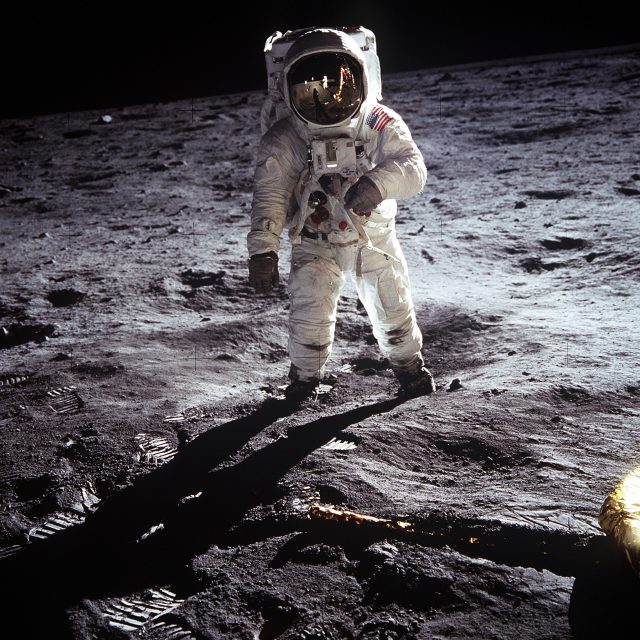 Buzz Aldrin on the Moon

Read the Secret File of technical information and quotes from Return to Earth by Buzz Aldrin.

Look forward to great fortune and a new lease on life!
Sharing little joys offer great hope to others.
Things are turning for the bright side.
More Fortunes >