Black Widow: Forever Red by Margaret Stohl is a Great Placeholder While We Await Natasha Romanoff’s Lead Role in Her Own MCU Film.

“Enter the World of the Avengers’ iconic master spy…” in Black Widow: Forever Red Margaret Stohl extends the Marvel Cinematic Universe and it’s characters into more personal intrigue, especially where Natasha Romanoff, the title character and lead of the story, is concerned.

This is Young Adult fiction, but it shouldn’t be discounted as easy, simple, or adolescent. It stands on its own and if you can’t wait until Marvel Studios finally releases a Black Widow movie, then I would highly suggest you pick this up.

The book is set up with a prelude of sorts that leads to a three-act play, where we get the full story in flashback and by reading the Case File transcript of the DOD investigating what we are reading in a debriefing. For those interested, it is S.H.I.E.L.D. CASE 121A415 and it is Clearance Level X.

I enjoyed the story with a plot involving some kind of quantum science from Russian military experiments. There’s more to it, but I promised no spoilers. Also involved in the story is Ivan Somodorov, a former teacher of Natasha Romanoff’s, and in this world, the one who gave her the moniker of Black Widow.

In play as well, are two teenage civilian assets Ava Orlova and Alex Manor, though I’m not sure assets is the right word for either of them. You’ll have to read to find out more. 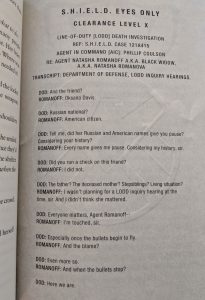 The chapters are set up to build the story, but from the different perspectives of a few characters, so that you know in whose head the italics thoughts are emanating. And there are only three characters who we get throughout the book and they are Natasha, Ava, and Alex.

The book doesn’t rely on any foundational information of Black Widow, the rest of the Avengers, S.H.I.E.L.D. or any of the movies or comics at all. It proudly stands on its own, utilizing Stan Lee’s comics philosophy that it’s always someone’s first issue.

That doesn’t mean there isn’t crossover or at least mentions of the greater world at large. Agent Phil Coulson plays into the story as does Tony Stark, while the other Avengers and other characters you would be familiar with from the movies or comics get only passing mentions that aren’t squeezed in for the sake of a name drop. As an example, when Tony says “Moscow’s push to weaponize quantum entanglement–and then build it. If they got it done, they’ve found what amounts to the legendary lost unicorn of every physics department in the world.” Natasha responds with “You know who also said that? Howard Stark, only he was talking about Vita-Rays. Bruce could have said the same thing about gamma radiation. I’m getting pretty tired of unicorns. Could we try to get a regular horse around here for once?”

Now, you don’t need to know or remember that Vita-Rays are what made Steve Rogers into Captain America, and it’s hard for anyone to forget that Bruce Banner’s Gamma radiation created the Hulk. But it’s still an example of how these passing mentions work to make this story part of the larger Marvel Universe, without just name-dropping for the sake of name-dropping.

And one other piece of non-Natasha brilliance is the line Stohl writes of everyone’s favorite MCU Agent, “Coulson, on her other side, always just looked like Coulson.” Aside from that, most of the great lines go to our titular heroine Natasha Romanoff, the Black Widow herself. 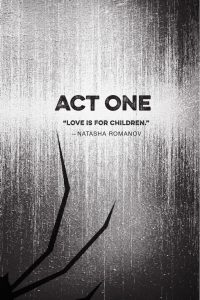 But my favorite part of this book belongs to the debriefing itself. Maybe it’s just me, but I really wanted more of the debriefing. Natasha’s hostility towards her DOD interviewer is not only palpable but brilliantly Natasha.

Two examples:
DOD: Agent Romanoff? I want to remind you that you’re under oath.
ROMANOFF: Look, let’s cut the crap, sir. I know what I did, and I know why I’m responsible. If you want to know where things really went south, it all started with Ava and me. IS that what you wanted to hear?

DOD: What I want to hear, Agent, is why.
ROMANOFF: That’s so–American.

DOD: Tell me, did her Russian and American names give you pause? Considering your history?
ROMANOFF: Every name gives me pause. Considering my history, sir.

This book is well put together in story, character, and arrangement. The switching of points of view, the formats from narrative to classified debriefing transcript and back again is well done and balanced so that we don’t get too much of any one person, but we get just enough of everyone.

And if you’re not sure how to picture the Black Widow in this book versus the Black Widow in the movies, then let the author’s acknowledgments take care of that for you. As Stohl writes, “And of course, it’s now Scarlett Johansson whom the world sees as Natasha Romanoff, and rightly so. I myself can’t help but see her when I write. Scarlett’s Natasha manages to somehow remain both a flawed human and a force to be reckoned with. Someone who might be more comfortable saving the world than saving herself but who won’t stop trying to do either.”

So go out and pick up a copy of Black Widow: Forever Red, if at the very least you enjoy the movies, then this will be an enjoyable read for you.

Your moods signal a period of change.
Let’s finish this up now, someone is waiting for you on that.
Sharing little joys offer great hope to others.
More Fortunes >