Marvel has done it yet again. This time by telling a compelling origin story with the added benefit of having more than enough hints to the larger “it’s all connected” universe, that it almost requires more than one viewing.

That said, I’m an old man, and the Stan Lee Marvel tribute before the credits didn’t make me cry, but there was definitely something in my eye…

Anyway, I only knew bits and pieces of Captain Marvel, as she existed in the comics. So I can’t, nor would I want to, go into any really minute detail about her origin story. But I do know the Universe that she’s now a part of and I was not prepared for the number of familiar faces that I saw on screen.

Now, the movie spends a lot of time in the ’90s which means four important things; the soundtrack is extremely on point, the style is completely Generation X, Nick Fury is sans eyepatch, and Agent Coulson is the “new recruit!” 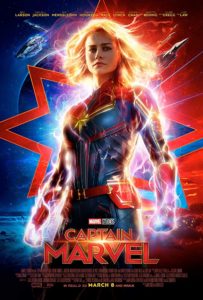 Seriously, get out your flannel and go see this movie! No Doubt, Nirvana, Republica, Beck, Hole, TLC, Garbage, and more, it’s as much a period piece as we’ve seen in the Marvel Cinematic Universe (MCU), and perhaps a sign of things to come?

It’s possible we’ll be getting new heroes, and if they get origin movies, well, Marvel knows how to do it. Plus, Brie Larson has the kind of Robert Downey Jr charisma to carry a film with small little facial expressions that just work. And well, I’ve never been let down by Samuel L. Jackson and Clark Gregg, who just get to play younger versions of the Fury and Coulson we’ve come to love.

And is it possible that the breakout performance in this film belongs to a cat? Well… I don’t think so, but I know some people who do.

Regardless, the cast was phenomenal and they were working with a classy script. Writers Anna Boden, Ryan Fleck, and Geneva Robertson-Dworet created a screenplay that speaks to everyone, regardless of who or what you are. They also tied it so well into the existing structure of the MCU that well, it feels like it stands on its own and it also feels like it couldn’t have come out any earlier.

Does Brie Larson give the performance of a lifetime? She’s pretty young to go around suggesting that, but she does give an amazing performance, with a stellar cast. Again, the familiar faces are bountiful, and I wish I had watched Avengers: Infinity War and the first Guardians of the Galaxy in preparation, and I probably will before I head to the theater again.

Which all of you should be doing. Go out and see Captain Marvel.

Read the Secret File of technical information and quotes from Captain Marvel.

You are interested in higher education, whether material or spiritual.
Courtesy is the password to safety.
Today it’s okay to make a few choices by going with your instincts.
More Fortunes >