Graham Marsh’s Michael Caine: 1960s is one of the most stylish books you’ll see 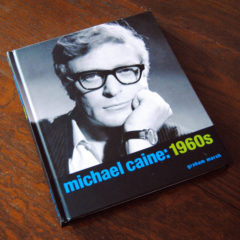 Edith Head famously said, “You can have anything you want in life if you dress for it.” Well, then Michael Caine was destined for success. In this book, Michael Caine: 1960s by Graham Marsh, the style of the era and of the man coincide with some of the most classic photo representations of the swingin’ sixties.

Now, there aren’t a lot of words in this book, but that doesn’t mean it doesn’t have a lot to say. If a picture is worth a thousand words, then this book is longer than Moby Dick!

Obviously, this book focuses on Caine, but it encapsulates more than just one man entering into the prime of his life. Why? Because as Graham Marsh says “Michael Caine in the 1960s. Michael Caine was the 1960s. He was living proof of the old cliche, right place, right time! His movies and the women he dated defined the decade. He was witty, working class — the perfect sixties man. He was Harry Palmer, Alfie Elkins and Charlie Crooker all rolled into one. He was the very form and model of cool.” 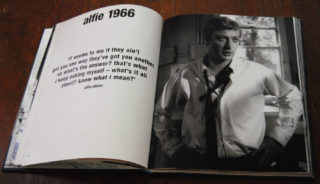 Beyond being cool this book is also extremely mod, and by that I mean the style defined (by Google) as “(especially in the early 1960s) a young person of a subculture characterized by stylish dress, the riding of motor scooters, and a liking for soul music.”

If you don’t know “mod” taking in a viewing of The Italian Job ought to educate you on the subject, it’s got everything except the scooter, and the soundtrack is by the legendary and soulful Quincy Jones. Not only that but The Italian Job has moved from cinema classic into British institution. In fact, the book also gives a spread to the other stars of that film, the Mini Coopers.

Two music references that I quite enjoyed throughout the short introduction text and the photos were Faces and A Band of Angels. These were bands of the time, that really never made it out of the time, although Faces endures thanks to Ronnie Wood and Rod Stewart. 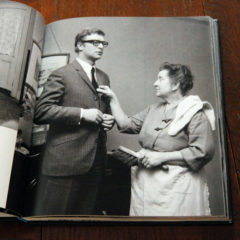 The book also pays tribute to the women Caine was surrounded by, starting with his mother, continuing with some girlfriends and some of his leading ladies and finishing with his wife.

A good portion of this book is in black and white, but that’s a choice that really works for the piece as a whole. The film stills are classic pieces of not only Caine’s career but the movies they are from and cinema as a whole. This book may not have the volume of stories that any of Michael Caine’s three autobiographies have; What’s It All About?, The Elephant to Hollywood, and Blowing the Bloody Doors Off, but it visually hits all the major points.

I don’t recommend “coffee table” books often, in fact, I never have up to this point, but I am right now. Go pick up Michael Caine: 1960s by Graham Marsh.

Read the Secret File of technical information and quotes from Michael Caine: 1960s.

Sharing little joys offer great hope to others.
Today it’s okay to make a few choices by going with your instincts.
Your moods signal a period of change.
More Fortunes >