The Umbrella Academy, Not Your Average Superhero Family: A No Spoilers Review

A Special Report from Agent Carter

Netflix recently premiered a new show, based on a comic book series of the same name, The Umbrella Academy. The brainchild of former My Chemical Romance frontman Gerard Way and Brazilian comic artist Gabriel Bá, published by Dark Horse Comics.

I have not read the comic series, but I plan to, just to see what they may have gotten away with on paper that could not be so easily replicated onscreen. As with most superhero or comic book adaptations, tv and movies are limited to what they can realistically pull off, even with the help of technology. But suffice to say, based on what I’ve seen, this particular comic book series is right up my alley. 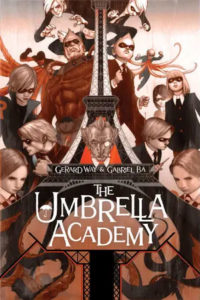 This is, of course, not the first we have seen from Netflix in the comic book genre. Netflix is well known for its collaborative efforts with Marvel on Daredevil, Jessica Jones, and Punisher, just to name a few. All of which have recently been canceled to due contracts and business, not their quality. Although, it seems Netflix may have already found something to fill in the gap left by the aforementioned shows, with one that both breaks the pattern of anti-hero/vigilante and yet settles in nicely with the fans looking for more of the Netflix quality comic book TV.

Sir Reginald studies the children and forms them into a crime-fighting team called The Umbrella Academy, exploiting the children’s special gifts and keeping them under a strict regimen of training while not allowing them the normal experiences of childhood. Kinda like if Charles Xavier was a dick, and had no right raising children with super powers. 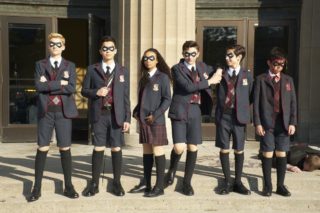 After the children have all grown up and gone their separate ways, they are all called back home to deal with the death of their father, Sir Reginald. Their long lost brother Number 5 reappears and brings with him a host of problems for the family to deal with, in addition to the emotional baggage and family drama already prevalent amongst the siblings. While being hunted down by time-traveling assassins, Number 5 must figure out a way to stop the end of the world, and he needs the Umbrella Academy to reunite to help him do so. Easier said than done, with the assassins assigned to stop him doing so.

And that’s just the pilot, the series takes off from there and you find yourself on a roller coaster ride through humor, action, drama, and really great music. If you tend to prefer imperfect superheroes who don’t always use their powers for good, Jessica Jones comes to mind, and who may fit certain comic book troupes while still managing to be unique characters, then this is the show for you. Or if you just want a fun superhero show to binge. Either way, it is definitely must-see TV, with something for everyone. I was thoroughly impressed with this show.

While I have already seen comments from people comparing some of the characters to other well-known characters out there, I still find that the characters represented in the show are not direct copies of existing characters from other franchises just with different names, which occurs within the catalogs of DC and Marvel. So, don’t let those types of opinions or comments deter you from the show, make up your own mind about it.

Agent Carter (@ThisAgentCarter) is a writer, podcaster, and geek. From Jane Austen to Agatha Christie, Doctor Who, Marvel, DC, and more, she geeks on books, nerds on movies, enjoys music, and fedoras.

Fame and fortune are coming your way.
Let’s finish this up now, someone is waiting for you on that.
Today it’s okay to make a few choices by going with your instincts.
More Fortunes >