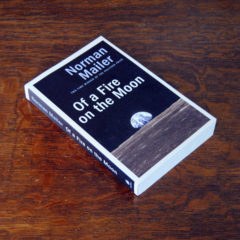 There is something unique about Of a Fire on the Moon by Norman Mailer. Is it that it’s immensely rich with poetry in prose telling one of the great triumphs of modern engineering? Is it that Mailer looks for the lurking evil of the Moon or that he’s not sure if the moon shot itself was the work of the devil?

Could it be the dark humour, the deciphering of the three men who undertook the journey and those organizations and people who helped get them there? Or the curious platitudes on science versus engineering? It is all of those things, which is exactly what makes it unique.

Of a Fire on the Moon is no ordinary book, it’s actually a compilation of the “reportage Mailer published between 1969 and 1970 in Life magazine: gripping firsthand dispatches from inside NASA’s clandestine operations in Houston and Cape Kennedy; technical insights into the magnitude of their awe-inspiring feat; and prescient meditations that place the event in human context as only Mailer could.” For context, Norman Mailer covering the Moonshot is like asking Stephen King to cover a Mission to Mars or asking Steven Spielberg to shoot the launch of a SpaceX rocket for the nightly news.

I’ve never read Mailer before, in fact, I only knew about him and couldn’t name any piece of his, but when I came across this book, I knew I had to open it up and experience what it contained. 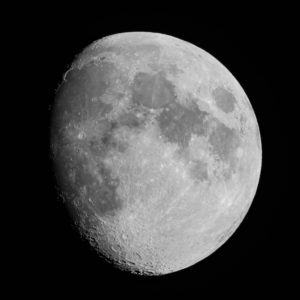 At times it is immensely rich poetry of prosaic journalism putting you there; in the Vehicle Assembly Building, Mission Control and Manned Space Center, the Service Module, the Command Module, the LEM and the Moon, while at other times is extremely theoretical bordering on boring, and then all of a sudden it gets more technical than anything I’ve read on the subject and you’re blown away by the sheer numbers of the mission.

However, you need to be warned that in some sections of this book Mailer refers to himself in the third person, where he calls himself Aquarius. One of the more interesting examples of this is “As FBI men used to be able to detect Communists anywhere (by a gift of the nose, by a gift of the nose!) so Aquarius always thought he had a sense of anyone who had ever taken too much LSD. Some salt of the libido was washed out; the aura was gone.

Now he felt that same absence, that same bemusement, same lunar air in all so many of the NASA technicians. It was not that they took LSD—he was confident most of them had not even gone near marijuana—it was rather a reflection of the same intoxication which thinned the blood and sucked the life from the complexion of hippies: it was that rush of thoughts extorted by the iron will, that liege paid by the body to provide the brain with intellectual ecstasies.”

Let’s take a look at some examples that assist in proving my point. Dark humour abounds, but one line had me chuckling; “‘I was sure,’ said Armstrong, ‘it would be a hospitable host. It had been awaiting its first visitors for a long time.’ The logic impeccable. ‘Come into my house, Joey Namath,’ said the eighty-year-old spinster, ‘We got a welcome for you, my sister and I.’” It’s genuinely universally funny, so it is exhibit A. 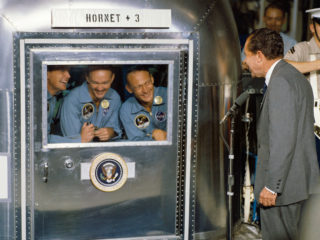 Mailer covers the three astronauts; Neil Armstrong, Buzz Aldrin, and Michael Collins pretty well, too. Having read First Man, the definitive biography on Armstrong, plus Aldrin’s Return to Earth, and Collins’ Carrying the Fire, I can tell you that in these three separate descriptions, Mailer is spot on.

On Armstrong: “He was apparently in communion with some string in the universe others did not think to play.”

On Aldrin: “From the back of the neck to the joints of the toes, from the pectorals to the hamstrings, the deltoids to the abdominals, he was a life given over to good physical condition, a form of grace, since the agony of the lungs when straining is not alien to the agony of the soul.”

On Collins: “It was apparent that of the three, he was the only one you could drink with comfortably.”

Mailer’s read on Physics versus engineering is superb poetry: “Physics is the church, and engineering the most devout sinner. Physics is the domain of beauty, law, order, awe, and mystery of the purest sort; engineering is partial observance of the laws, and puttering with machines which never work quite as they should work: engineering, like acts of sin, is the process of proceeding boldly into complex and often forbidden matters about which one does not know enough—the laws remain to be elucidated—but the experience of the past and hunger for the taste of the new experience attract one forward. So bridges were built long before men could perform the mathematics of the bending moment.”

But it is when Mailer is actively looking for something, as opposed to reporting and retelling that his juices really start to flow and that is in regard to journalists, looking for a lurking evil in the space program and on the moon, and putting the whole thing into the context of the time period. 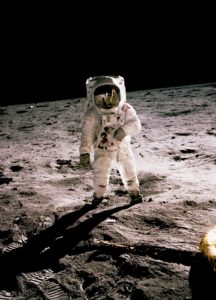 If his psychology of journalists didn’t seem so accurate it would be much more scathing. “The psychology of journalists is not easy to comprehend—they scurry around like peons, they have the confidence of God. Over the years they develop an extraordinary sense of where the next victory is located. If a man gives a press conference and is not surrounded by reporters when it is over, he need not wonder how his fortunes are moving—the reporters have already told him. It is for this reason journalists pick up confidence that they shape events—in fact they are only sensors in the currents of the churn, Venturi tubes to give you the speed of the history which passes. Nonetheless, there is no psychological reality like a man’s idea of himself. Even if a writer has lost the best reaches of his talent by putting out facts for years which have been stripped of their nuance—writing newspaper stories in short—still he retains an idea of himself: it is that his eye on an event may be critical correct reportage of it.”

But the lurking evil and sinister nature of space travel is a common thread throughout the book. 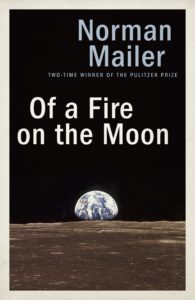 And it seems Mailer is disappointed that there is no sinister evil lurking on the Moon or even within NASA, but it didn’t stop him from digging into the technical details with prolific prose.

“It cost an expenditure of sixty pounds of fuel on the launch pad for every pound of spacecraft to go into moon orbit, and five hundred pounds of ground fuel for each pound the Lem would bring to the moon. It suggests that a saving of one hundred pounds (perhaps the weight of two couches) is, by the most conservative measure, a net gain of six thousand pounds of fuel. It used to be that for every dollar spent on a Hollywood movie, eight dollars had to come back at the box office to pay for prints, distribution, publicity, overhead and theater exhibition before a profit was shown. These fuel figures were more impressive by far.”

And there’s the way he described the return of Apollo 11 to Earth; “on the way down, the spacecraft would gleam like a comet, a pale violet flame would flare behind it for hundreds of yards in a galaxy of molecules, a nebula of heat and light.”

But above all Mailer had a way of putting it all into context:

Seriously, this is such an amazing read, that I can recommend it for NASAphiles and for people who are genuinely looking for a good book.

Read the Secret File of technical information and quotes from Of a Fire on the Moon.

To let another into your heart, first let yourself in.
Your moods signal a period of change.
Today it’s okay to make a few choices by going with your instincts.
More Fortunes >