Reflecting “an early 1990s worldview that seems time-expired” Douglas Coupland mixes fact with fiction within the three parts of Polaroids from the Dead to make up what is now, two decades on from its initial release, a thought-provoking time capsule well worth your time.

The three parts to this book are as follows: Part One is Polaroids from the Dead; Part Two is Portraits of People and Places, and Part Three is Brentwood Notebook.

Part one “Polaroids from the Dead” the titular part focusing on a series of persons and their stories surround Grateful Dead concerts. The vignettes, if you will allow me to call them such, involve new hippies, old hippies, non-hippies, and what the culture used to stand for and what it is today.

Yet there is an underlying theme, a motif that speaks to the passage of time but not of getting older, it’s just whispering of no longer being young… A very fine distinction.

There is also an extremely current application to the response of one daughter, Skye, to her father. “Skye says, ‘Dad, you always complain people my age never protest about anything, but the first moment we even try to make a peep, you ex-hippies are the first to slam us, saying we’re nowhere near as passionate or effective as you were in those fucking sixties. Make up your minds., stop making us have to subsidize your disillusionment with the way you turned out.’”

Part two “Portraits of People and Places” is potentially the most poignant and thought-provoking piece to the book. Utilizing people and places as equal characters there is a lot of philosophy that gets dropped on the reader in a manner of speaking. Five small pieces from the larger stories within this section are as follows:

It’s amazing that some of these quotes stand on their own considering all the time Coupland spends setting them up, and perhaps they are better within their context in the book, but that they all work separately too, that’s a bit transcendent.

Part three “Brentwood Notebook” is a soliloquy on the middle-class, which has appeared in other Coupland works, but it is also the most brilliant TED Talk you’ve ever read on “Denarration.” It also speaks of what Brentwood is and was in relation to the middle-class and its newfound resurgence in infamy with the O.J. trial, a different infamy different from the place where Marilyn Monroe died. 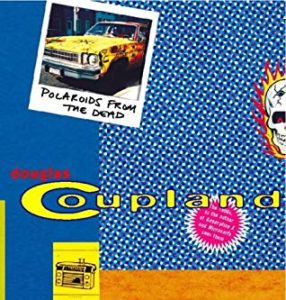 Polaroids from the Dead original cover

While you do require a good portion of the rest of the text and there is more to it than just the quick summarization I’ve given, this part does speak to more than what I’ve just said.

Example: “If life is a car traveling down the road at 55 mph, money and fame will change the color of the car, but it won’t change the speed or its direction.”

“Polaroids from the Dead” is a wonderful read from Douglas Coupland. He has managed to completely maintain a narrative throughout three separate sections and many different stories therein. It is a different format than the narratives and points of view from his previous works, but the change is slightly refreshing and yet strangely familiar.

What’s more, is that for a book published over two decades ago, Coupland nailed concepts ripe with current events with two quotes:

“Strange, he thinks, how all the old tricks of success in the world–education, a broad skill base, literacy, numeracy–are no longer guarantees of anything.”

“…certain people have much to gain by propagating such negative discussion.”

So, I highly recommend Polaroids from the Dead, just as I did with Generation X, Microserfs, and Life After God. Go out and start reading Douglas Coupland!

Read the Secret File of technical information and quotes from Polaroids from the Dead by Douglas Coupland.

To let another into your heart, first let yourself in.
Look forward to great fortune and a new lease on life!
Fame and fortune are coming your way.
More Fortunes >