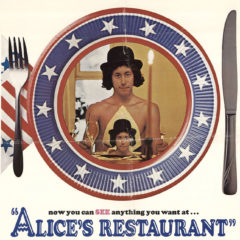 That is the beginning of the narrative that is spoken at the start of the movie, Alice’s Restaurant, and also used as the trailer for the film as an explanation of what the movie is and how it is based on Arlo Guthrie’s song of the same name. And while the film is truly based upon the song’s narrative which Guthrie wrote, the film was not written by him, but by Venable Herndon and Arthur Penn who also directed the film and who was coming off of the success of 1967’s Bonnie and Clyde.

The movie is more than just Arlo’s song in a cinematic forum. As the movie goes, it’s one hour and fifty-one minutes, almost an hour is spent building up to the Thanksgiving dinner that creates the garbage that really starts off the narrative borrowed from the song…

That doesn’t mean the first hour is extraneous to the film as a whole. In that first hour we see Guthrie, playing himself, dealing with the draft, to which he says as narrator “With the draft breathing in my face, I figured I’d get me some of that deferred preferred draft exempted U.S. Government inspected education.” 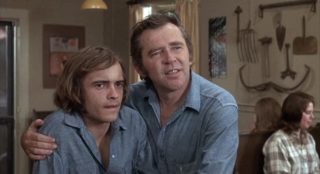 There are also the additional subplots involving the Shelly character which were fictional and not based on any real people or incidents in Guthrie’s life, but I get the feeling it was added in by the writers to add a more rough edge to the counterculture instead of it being just marijuana and free love. The Shelly storyline does allow the script to dive into the darker side of drugs, addiction, and mental illness.

This film is very much an avant-garde snapshot of 1960’s counter-culture: the good, the bad, and the ugly.

Ray’s jealousy of Alice’s sleepin’ around is one of the unspoken double-standard drawbacks of the free love movement of the 1960s, that the writers clearly wanted to convey.

It’s also apparent during Ray’s speech that he takes Alice for granted. “Grace be to Alice for coming home to cook this feast. Grace be to us for being here to dig it, because we’re beautiful. Now we’re doin it. We got what we need. What more do we want? Pastures of plenty, come on dig in…” Which ties very well to later in the film when Alice and Ray are talking about beauty

Alice: I guess maybe our beauty wasn’t coming through to him…
Ray: Maybe we haven’t been so beautiful lately…

There’s an existential vibe to the deaths of Shelly and Woody Guthrie (Arlo’s father), which seems to beget a more philosophical twist to the film, which is just on the fringes and relegated to be there. Although, Woody’s death had come years prior to the film’s release and Woody is portrayed on screen by Joseph Boley. 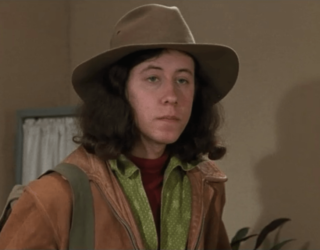 The film was released on August 19th, 1969, four days after Guthrie had been on stage at Woodstock, perhaps the peak of 1960’s counterculture this film has come to represent. That timing is only important to consider because as Woodstock was able to shine a brighter light on the artists involved, this movie was probably able to capitalize a little bit on some of that good PR from Arlo’s performance.

In the event you don’t know Arlo Guthrie, his performance of “Coming Into Los Angeles” was immortalized in the film release of Woodstock. Some of that must have rubbed off as the film grossed $6.3 million in the U.S. which puts it into the top 25 highest-grossing films of 1969. (It came in at #23.)

The cast is of note because it’s not just a bunch of actors surrounding Arlo Guthrie. It’s also a who’s who of sorts. Let’s start at the top though, with Arlo Guthrie who plays himself. He was gifted the muse of singing, songwriting, and storytelling. In this film as himself, he appears too young and too talented all at once. But Guthrie isn’t the only person playing himself.

Officer Obie actually plays himself. Sheriff William Obanhein, who later stated that he demanded the role because “if anyone is going to make a fool out of me, it might as well be me.” And you can’t argue with his logic. Additionally, the blind justice within the film was also played by the real judge who presided over the case, Judge James Hannon. 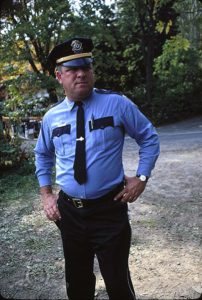 Even the real Alice and Ray Brock appear in the film, though they don’t play themselves.

And while Obie was happy to make sure he was not being played a fool by others, Alice took offense at the way the writers portrayed her… In a 2014 interview, she said, “that wasn’t me. That was someone else’s idea of me.” She also states that she never slept with Guthrie, which the film implies and that she never hung around heroin users, but again, I’ve stated that the heroin and Shelly character and plotlines were fictions on every level. But she also said of the film and the song that “it just really impinged on your privacy. It’s just amazing how brazen people can be when you’re supposed to be a public figure.”

Even the folk lineage is in there with more than just Guthrie, Lee Hays plays the reverend and Pete Seeger playing himself, while Joni Mitchell sings at Shelly’s funeral.

Guthrie included a lot of his friends in the filming as actors, but these relationships were strained as all of them were staying at the same hotel during the shooting of the film, but Guthrie received the star treatment with a limousine ride to the set every day, while the rest were left to fend for themselves and find their own transport.

But back to what happened on the screen, or more to the point in the script, the writers of this film liked the idea of fitting Arlo’s film character with “habits.” Or at least utilizing the word for a bit of fun. After getting kicked out of music class Guthrie states “I seem to have this habit of attracting praise like that.” Then after getting thrown through the glass window of a restaurant “I seem to have this habit of getting arrested…” and finally after leaving school, “seems like schools have a habit of dropping out around me.” It’s of note because it’s not hilarious humor, but it’s a running gag throughout the first hour of the film.

From there going to the final scene, director Arthur Penn stated, “the last image of Alice on the church steps is intended to freeze time, to say that this paradise doesn’t exist anymore, it can only endure in memory,” which is also a commentary on the inevitable passing of the dreams of the counterculture, something that, as we get further away from the 1960s and it’s origins seems to drift further and further away from the youth in its many current incarnations and deeper into myth. 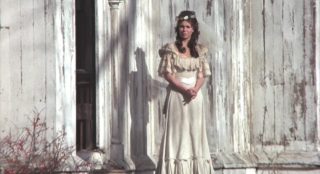 Ironically, the real Alice and Ray Brock finalized their divorce the same day that the wedding scene ending the film was shot.

But it’s not just a film for nostalgia’s sake as it was filmed during the time it represents. And it was also written in the time that it represents, which is why there are some deeper statements and questions that come about naturally, or at the very least don’t seem forced, like similar statements and questions that appear in other films from other times.

Now both of these quotes come from Guthrie’s character, but they’re as much a part of most of the other characters in the film as they are of him.

“Sorta sets you adrift…. Let’s you know your life is going by… All of a sudden I feel in a hurry to find out what my thing’s going to be. Who and where…”

And you can easily look in hindsight at these statements and questions in regards to this film coming out representing the era that is basically ending. The 1960s built up to Woodstock. 3 Days of Peace & Music was the climax to that era. “Hard travelin’” and “Who and Where” could also be statements, not just about individuals, but about the generation that grew up and came of age on flower power, and what was going to come next. 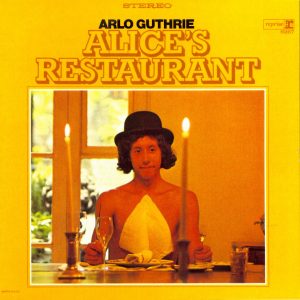 This film was written before and then released in 1969, which means that they didn’t know what was in store for them. We only know that looking back on it from 50 years in the future.

But this film holds up well, despite its age, or maybe because of it. The two statements I’ve highlighted have as much relevance now as they ever did then because they’re about self-discovery, a journey that everyone undertakes, though we all do it at different times and at different paces.

So, while I’ve written at length about “Alice’s Restaurant” the song that inspired this movie and how that is a Thanksgiving tradition to listen to it, this movie too, is a bit of a Thanksgiving tradition, or at least a seasonal one. Sure it’s easy to sit around with friends and family alike for over 18 minutes, but I’d like to find some time around Thanksgiving to watch this film. Find out where I am on my journey and take stock of where I’ve been and where I’m going.

As I write this, I’m more lost than ever, but that doesn’t mean I was always lost or that I’ll always know where I’m going. I just like to keep stock and take note. Sometimes a little reflection can go a long way.

Read the Secret File of technical information and quotes from Alice’s Restaurant.

Sharing little joys offer great hope to others.
Fame and fortune are coming your way.
The path of life shall lead upwards for you.
More Fortunes >