Len Deighton’s Goodbye Mickey Mouse is as much a love story between men and women as it is between man and machine. It’s historical fiction set in the 220th Fighter Group of the U.S. Eighth Air Force in early 1944.

The two main characters in the story are Captain Jamie Farebrother, a fresh-faced pilot in the European Theater of War after training pilots on the American West Coast, and Lieutenant Mickey Morse a veteran pilot on his way to becoming America’s Number One Flying Ace, and their professional and social network.

Group leaders, Colonels, Generals, technicians, military police, other pilots, public relations officers, and of course the local women all play into this little story. But if feels very much like a play. It has parts, very distinct ones, but if I explained what they were, it’d be full of spoilers. 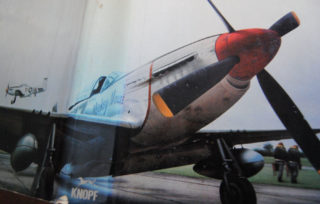 The relationships, specifically the in-depth focus on romance is unique to this book compared to all of the Deighton fiction I’ve read before. But all of the detail that Deighton puts into spy craft he applies to these relationships. They are so gripping because the details are there and I had a hard time putting the book down.

Deighton can write romance. I’m not shocked so much as I read it and it unfolded on the page, I was just surprised that’s where it was going.

And this is Len Deighton so the details and dialogue that are a part of the relationships and romances are just as crucial and critical as the factual details of the planes, military procedure, and the air planes and battles in the skies.

“There’s so much to say when you’re falling in love, and so much to listen to. They wanted to tell each other everything they had ever said, thought, or done. Their worlds were in collision.”

“Men were so slow to understand anything that was unspoken, and far too reliant upon things that were actually said.”

Plus he gets to have some fun with the two lead women, who are by no means helpless and dainty, as this exchange illustrates.

Vera stood in the doorway looking at her friend quizzically. “You never cry, do you? I can’t imagine you crying.”
“I’m not the crying type,” Victoria said. “I swear instead.”

And despite all of the love between man and woman, pilot and wingman, fighter and bomber, there is an underlying darkness to the American Allies occupation of their British hosts… The sentiment as a matter of thought for one Australian journalist in the book “‘overfed, overpaid, oversexed, and over here,’ as the British kept saying.”

While these relationships between the pilots and the local girls happened, it wasn’t exactly welcome. In Goodbye, Mickey Mouse the parents of one of the girls, specifically the mother gets to embody some of this resistance (possibly resentment). But again that leads to another facet of this story which is also an examination on parents and children.

It’s also still a wartime story and boys grow up overnight as they fly their first mission, or get their first taste of action, there’s a lot going on in this book. Plus not to be completely one-sided in romanticizing the Fighter groups and their dog-fighting, Deighton as storyteller is able to throw some praise on the bomber groups with “Who could see the bomber crews without admiring the phlegmatic determination which makes other kinds of courage seem no more than temporary lapses of judgement? They were the real heroes, the ones who came up here day after day as human targets for every weapon an ingenious, dedicated, and tenacious foe could use against them. So in life itself the true measure of courage is to fly on despite the tragedies of accident, sickness, or failure.”

Lastly, for those of you who are not going to pick up this book, may I offer you this one detail that I found brilliant as a takeaway for you.

There is a moment during a dogfight where Farebrother does something that all gamers can appreciate, “The German turned, Farebrother eased the stick and held on to him, pressing himself forward against the harness with the insane feeling that he could actually increase his speed by leaning forward.” While it’s a great detail, it’s relevance to everyone in the early days of gaming isn’t lost on me. Who among us didn’t move the NES controller despite knowing it was the buttons on the controller that did the controlling.

You have to admit that’s pretty good.

So, do I suggest Goodbye, Mickey Mouse? I do. If you like romance, it’s got something for you. If you like historical fiction? It’s covered. Fascinated by WWII? This is a lighter way to get into a fighter squadron. And while it is fiction, Deighton isn’t one to mess around with making something up if a fact will suffice.

But why should this book be picked up by anyone and everyone?

Because “‘Fundamentally, Duke,’ said Colonel Dan with what he considered great patience, ‘everything in the universe is money and sex.’”

Read the Secret File of technical information and quotes from Goodbye, Mickey Mouse.

Things are turning for the bright side.
Good clothes open many doors. Go Shopping.
Look forward to great fortune and a new lease on life!
More Fortunes >