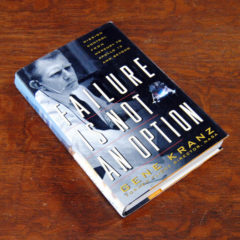 There is much more to Gene Kranz than Ed Harris’s portrayal of the Flight Director in the movie Apollo 13. As one of the early members of Flight Control, Kranz was there for Mercury, Gemini, and Apollo before moving up into more of a management role.

His book “Failure Is Not an Option: Mission Control from Mercury to Apollo 13 and Beyond” is not only a vivid first-hand account of history as it happened, but the perspective is unique to mission control and not the same that you’ll get from the other books written either by astronauts or anyone outside of the Flight Director’s chair.

There is so much that is covered in this book, and more to the point, there is so much in this book about process and decision making and support that is not covered in the astronaut recountings of missions. That isn’t to say astronaut autobiographies like Aldrin’s or Collins’ don’t detail the support from Mission Control. But the command and control of NASA, the way Kranz describes it having been a part of Flight Control since before the first Mercury missions when it was just the Space Task Group, is supremely unique.

This was a brand new world not just for the astronauts but for the flight controllers, too. Kranz talks about how he “had left behind a world where airplanes were flying at roughly five miles a minute. In this new, virtually uncharted world we would be moving at five miles per second.” This means that the decision-making processes had to be sped up as well. 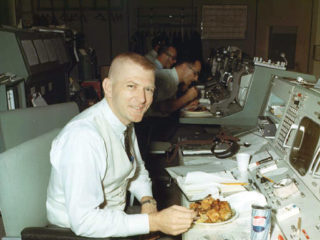 “The tools we used in Mercury were primitive, but the dedication of highly trained people offset the limitations of the equipment available to us in these early days and kept the very real risks under control. But at a price; this was high-sweat, high-risk activity, demanding a degree of coordination between the ground and the capsule exceeding what I had experienced even in the testing of experimental aircraft.”

Plus “learning by doing was the only way a controller could ever become smart enough to succeed in the tough and unforgiving environment of spaceflight operations.”

There is so much to these two statements. And the idea that they had to make it up as they went along is a bit far fetched, as there was “some” data to build off of, but for the most part, they were creating the rulebook as they went along because nothing had come before. Not only were new rules needed but new measurements were required as well.

It’s not like anything else, because this was all new. And yet, Flight Control was a driving force behind the success of Mercury, Gemini, and Apollo. And Flight Control was made up of people. Even from the early days “Those in the Space Task Group were a rainbow of personalities, mannerisms, and speech.”

Early on help came from a political decision in Canada. “When the Avro Arrow, the world’s top performing interceptor aircraft, was canceled by the Canadian government, the engineers came south to the United States and into the Space Task Group, providing much of the instant maturity and leadership needed for Mercury.” But once Mission Control was moved to Houston, it’s rapidly expanding departments ate up graduating engineers from all over. 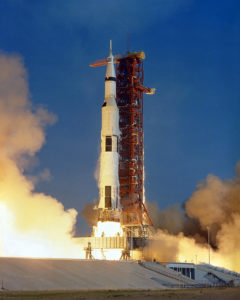 There’s so much about process in this book, yet it’s not too technical so as to lose any reader who doesn’t have an engineering degree. But what stands out for me is that Kranz knew his legacy, and he’s both proud of his legacy and unhappy as well.

Near the end of his tenure as Flight Director he said “We fought and won the race in space and listened to the cries of the Apollo 1 crew. With great resolve and personal anger, we picked up the pieces, pounded them together, and went on the attack again. We were the ones in the trenches of space and with only the tools of leadership, trust, and teamwork, we contained the risks and made the conquest of space possible.”

Kranz’s awareness also leads to his questioning of why we haven’t done much since. “Entering the twenty-first century, we have an unimaginable array of technology and a generation of young Americans schooled in these technologies. With our powerful economy, we can do anything we set our mind to do. Yet we stand with our feet firmly planted on the ground when we could be exploring the universe.”

He continues with a slightly more, heavy-handed “Three decades ago, in a top story of the century, Americans placed six flags on the Moon. Today we no longer try for new and bold space achievements; instead we celebrate the anniversaries of the past.”

I’ve asked the same question, though only as one who is interested, but it’s good to know Kranz wrote that concern of a lack of direction in the space program back in 2000.

Well, Gene, NASA’s Artemis plans to get a 2024 Moon mission together as preparation for Mars and beyond. And while this is good news for the legacy Kranz created in his time at NASA with the rest of his team, and for me as a fan, it still begs the question of why it took so long. Say what you want about the Space Shuttle program, but 2011 is the last time if flew, and while private industry has started to get into space, it’s taken too long. 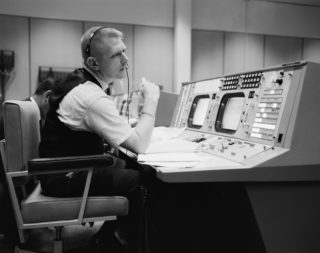 I agree with Kranz and I feel his anger. Mercury, Gemini, and Apollo set not only America, but the world, up technologically for more advanced future space operations, but we haven’t really been out of high Earth orbit since Apollo. Artemis is a nice change of pace, but it took too long to get there.

The point is, Gene Kranz was a legend and while Apollo 13 brought him some notoriety, he is more than just his vest. He was behind the Flight Director desk when Armstrong and Aldrin landed and first set foot upon the Moon.

He was a part of the Space Task Force when it was still in Langley, Virginia and he helped usher in the era of Apollo. This book is a great read, and if it intrigues you, prepare to sit back and wonder why we’re just getting around to going back.

Read the Secret File of technical information and quotes from Failure Is Not an Option by Gene Kranz.

Your moods signal a period of change.
Let’s finish this up now, someone is waiting for you on that.
Even a broken clock is right two times a day.
More Fortunes >