Meeting Bernard Samson: A No Spoilers Review of Berlin Game by Len Deighton

There isn’t usually a lot of hype going in to the reading of a book that is more than three decades old when you get around to it, but thanks to the wonderful community of the Spybrary Podcast, my reading through the bibliography of Len Deighton finally arrived at Berlin Game, the first of nine novels from Deighton starring Bernard Samson.

So, despite having skipped any spoilers from that podcast, I did know that many people think Samson is Deighton’s best, but it’s one book, and that’s not enough to get me to roll over on my “unnamed spy” namesake Agent Palmer from his first four spy novels, but I did enjoy getting to know Bernd in Berlin Game.

It’s not a slow burn, this novel. Before you even get your bearings, games are being played, and it’s not like hey look at that baseball game, it’s more like walking into an arcade. Everyone is playing games, and while they aren’t all highlighted, details and players come into and out of focus and before you know it, you’re in the world and wondering what is going on.

It’s not a whodunnit necessarily, but it does have that “find the mole” mentality, with a traitor amongst his own, Samson is tasked with handling a high level asset “Brahms Four” and it’s a race with whomever the traitor is.

I know the inside flap says things like “brilliantly etched scenes of suspense” and that we “follow Samson into the center of a web of treachery and deceit, as he sifts through the layers of lies, time-honored assumptions, and intramural intrigues that mask the trader’s identity.” 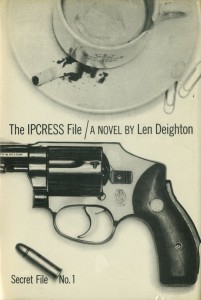 Look, there’s some wonderful alliteration in there, but honestly, Samson, like the unnamed spy “Palmer” before him, gets to where he needs to be not by following the rules, but by following his hunches. They are both fiercely individual in an industry where trust is always in short supply. And there are sentiments where I find a lot of Palmer in Samson.

Three quick examples are a quote from Samson, one about Samson, and a thought from Samson.

This quote from Samson himself.
“I’ve been taking things too seriously for years,” I said. “I’m afraid it makes me a difficult man to live with. But I’ve stayed alive, sweetheart. And that means a lot to me.”

This thought from Samson.
I always sleep face downward; it stays dark longer that way.

And this paragraph and quote about Samson from Trent.
“You’re always in time for the coffee,” said Trent. He was standing at a wooden bench. Upon it there was a bottle of Jersey milk, a catering-size tin of Sainsbury’s powdered coffee, and a bag of sugar from which the handle of a large spoon protruded. Trent was pouring boiling water from an electric kettle into a chipped cup with the name Tiny painted on it in nail varnish. “No matter how long I wait for you, the moment I decide to make coffee, you arrive.”

The unnamed spy series is all I have for comparison, really, but I am really enjoying not only the idea that there are 8 more novels with Samson, but Samson himself. Perhaps, Deighton finally figured out the character he wanted to create? The unnamed spy has some background, but you get so much more of a fully formed backstory from Bernard Samson in Berlin Game alone, then you do from the unnamed spy in all four books of that series. 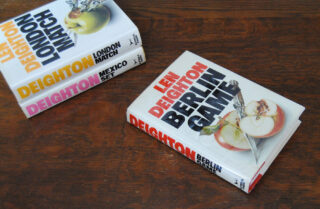 Perhaps that’s why the spoiler-free discussions I’ve heard on the subject from Spybrary have a majority of hosts, guests, and community enjoying Samson more. Perhaps he’s just a more fully formed character, because if the remaining 8 are anything like this first foray into Samson, then I’ll be calling him Bernie before the end of the third book in the series!

You don’t need to read all of Deighton’s previous books like I have to read this one. This is a series unto itself. But if you have read any previous Deighton, especially the unnamed spy/Harry Palmer series, then you need to read this series. I’m only one book in, and I’m suggesting it. Honestly, when I picked up Berlin Game, I expected to write something along the lines of “let’s see what happens in book two,” but I don’t need to wait. I’m in Bernd, I’m in.

Read the Secret File of technical information and quotes from Berlin Game by Len Deighton.

Nothing in the world can take the place of persistence.
You are interested in higher education, whether material or spiritual.
Your moods signal a period of change.
More Fortunes >