This is start of my Rotospective on Ralph Bakshi. I will be posting about each film in his library in the order I saw them.

Ralph Bakshi’s Wizards is just as relevant today as it was when it first came out in 1977, if not more so. The story is set after celebrating 3000 years of peace, since the world blew up in “a thousand atomic fireballs.”

“An illuminating history bearing on the everlasting struggle for world supremacy fought between the powers of technology and magic.”

The film is based around two brothers- Avatar, the good wizard and Blackwolf, the evil wizard. It really is that simple. Avatar is a champion of magic while Blackwolf has  mastered technology and the black arts. 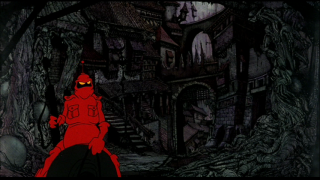 The quality of this movie cannot be understated. The animation, the use of rotoscoping and the backgrounds are amazing. The parallels between the sides of magic and technology, based in their theories and how Bakshi artistically displays both sides on the screen are simply divine.

The battle between magic and technology isn’t really a fair fight, but it’s not supposed to be. Blackwolf has machine power, appears to have more numbers and will do whatever is necessary to allow his army to win and take over the world. Avatar sets out with WeeHawk the elf, Peace a, what I will call, rebooted robot, formerly an assassin of Blackwolf and Elinore the Queen Faerie of Montagar.

Although there are other factions of elves, both defending against and attacking Blackwolf, it is primarily these four characters that are charged with saving the world against astronomical odds.

The music that sets the stage, composed by Andrew Belling is quite frankly out of this world. I just purchased a copy of the limited edition release of the soundtrack and can’t seem to stop listening to it. Simply put, it’s a truly unique piece of music that put together as a soundtrack is unparalleled in it’s authenticity. 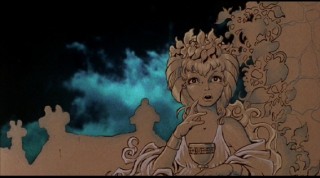 The artwork, the music and the story, combined with the great voice acting make this a timeless classic. It remains a cult classic, but is so much more. New generations discover this movie every year. And why shouldn’t they? The theme of magic (or nature) and technology will always remain relevant so long as there is technology.

When mobile technologies seem to be creeping in and invading our lives all the time, how far off can we really be from annihilating ourselves? When the movie was written, before 1977, Bakshi himself wrote in the script that the first blasts were set off by five terrorists. Given the current state of the world, is that so far fetched? Again, the relevance of this movie cannot be understated, so it is no wonder that generation after generation are touched by the film.

We keep building cities and enlarging civilizations and nature seems to be falling by the wayside. If nothing else, using magic as a synonym for nature, we may not have much magic left on earth when it all blows up in “a thousand atomic fireballs.” 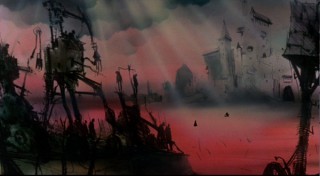 Could it be that this tale is not only Ralph’s vision of the future, but what’s probable? And through it all, did he see a possible rebirth? The movie does take place 3000 years in the future and we can’t be that far from self destruction.

I toiled with how to end this, being that it’s a 40 year old movie. There has got to be a statute of limitations on *Spoiler Alerts*, but still I’m just not sure. The ending of this film is worth a post of its own, one that I may write one day, but the melding of magic and technology…

See more about Wizards in Another look into Ralph Bakshi’s Wizards (this post contains spoilers.)

Your moods signal a period of change.
Sharing little joys offer great hope to others.
You are interested in higher education, whether material or spiritual.
More Fortunes >