No ‘Match’ for conclusion to Deighton’s first Samson trilogy

London Match, the final piece in the first trilogy centered on Bernard Samson, does well to both stand on its own and build off of its predecessors, Berlin Game and Mexico Set. As expected, author Len Deighton delivers everything you could ever want in spy fiction with the bonus of Bernard Samson being, well, Bernard Samson!

There are different types of trilogies. Some are one solid story that arcs over three books. Others are three different stories with similar connecting elements, but what starts with Berlin Game, continues with Mexico Set, and comes to London Match is some combination of the two.

But no spoilers, I think it would be best if you experience this trilogy as I did, with as little foreshadowing as possible. Rather, here is a collection of quotes from the book that I particularly enjoyed, along with the reasons that I chose them.

“There’s no one in the German Section with field experience comparable to yours. You’re bright as hell, despite your lack of proper schooling and the chip you have on your shoulder about it. For most things concerning the German Section, you’ve got your own unofficial sources of information, and often you dig out material that no one else can get. You are straight. You make up your own mind, and you write your reports without giving a damn what anyone wants to hear.” – Bret Rensselaer on Bernard

This is Bernard Samson as his best. The trilogy, or even the ennealogy (all 9 books in the series) at large, is more than a mere character to drive the story along. At least in the first trilogy, he really is the series. 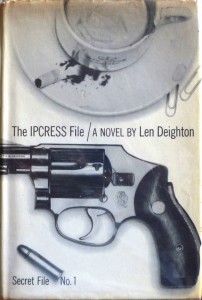 The second quote just finds my love of Harry Palmer and gives it a hug. There’s a scene of Bernard, in the company of his Uncle Silas and some work associates, where Deighton describes, “Before pouring the wine, Silas lectured us about it. Chȃteau Palmer 1961, he said, was the finest claret he’d ever tasted, the finest perhaps of this century. He still hovered, looking at the wine in the antique decanter as if now wondering whether it would be wasted on the present company.”

Now, to be sure, mentions of Palmer don’t really happen often. This is Samson’s series, but it’s a 1961 Palmer, and for those who know a little about wine, the year of a vintage is based upon the year the grapes are harvested. While I don’t know what you consider to be the harvesting of a book, but The IPCRESS File was published in 1962, so perhaps it was “harvested” in ’61? No matter, I love this reference.

I also enjoy Deighton’s description of the room that a writer might have. “It was the sort of untidy room in which you’d expect to find a writer or even a ‘journalist.’ There were crowded bookshelves, a desk with an old manual typewriter, and more books and papers piled on the floor. But Lange had not been a professional writer for many years, and even in his newspaper days he’d never been a man who referred to books except as a last resort. Lange had never been a journalist; Lange had always been a streetwise reporter who got his facts at firsthand and guessed the bits in between.”

I imagine Deighton just looking around at his own untidiness and describing that. There isn’t anything anyone can do to remove that fantasy from my head, except to prove me correct.

Now, I could just keep explaining all these quotes, but the next few stand on their own, indifferent to context, and I’m going to share them as such:

“It’s all politics,” I said calmly. “Espionage is about politics. Remove the politics and you don’t need espionage or any of the paraphernalia of it.” – Bernard Samson

“There’s so much paperwork. If we didn’t bend the rules now and again, we’d never get everything done.” – Gloria Kent

“The tragedy of marriage is that while all women marry thinking that their man will change, all men marry believing their wife will never change. Both are invariably disappointed.” – Bernard Samson

“For the womanizer is destructive, the rock upon which desperate women dash themselves to pieces.”

“Ahhhh.” Ted’s yawn was a symptom of anxiety. For all God’s creatures, fear brings a drowsiness, a self-preserving urge to snuggle down somewhere out of sight and go to sleep.

Now the last two I pulled out are now timeless, for better or worse.

The first is a conversation that Bernard has with his brother-in-law:
“If ever you wanted to prove that there is no relationship between effort and reward in this world, you’ve only got to read the life of Mozart.”
“You don’t even have to do that,” I said. “You can come and work in my office and find that out.”

Somehow I get the feeling that this is all too prevalent in most corporate settings.

And lastly, a relevant quote from this book published in 1985 that is never going to fade away from relevance:

Time used to be the panacea for everything, but nowadays our sins are remembered on computers, and random-accessed memories do not fade.

The good news is that the only thing you need to remember is to pick up Berlin Game and begin this magnificent trilogy. It is absolutely worth your time whether you enjoy spy fiction or just a good globe-trotting espionage jaunt.

Read the Secret File of technical information and quotes from London Match by Len Deighton.

Whoever wants to reach a distant goal must take small steps.
To let another into your heart, first let yourself in.
Your moods signal a period of change.
More Fortunes >