Capturing the Magic of the ‘Funny Game’ of Baseball 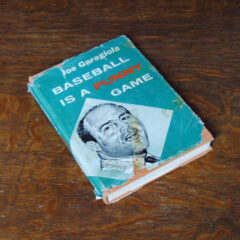 Baseball is a Funny Game by Joe Garagiola is not about a baseball star. It’s hardly about the fundamentals of the game or its many statistics. It is simply the story of baseball told by an average catcher who bounced around the National League for a while who can tell stories with the best of them.

This book is baseball as it was and as it is, because the more things change the more they stay the same. America’s game is no exception.

There are two very opposite things that came to my mind while reading this book. First, baseball is not played the same way anymore, and when old people or young people who know the history say the game has changed, it has indeed. So, too, has the business of baseball. Second, as surprising as this may be, baseball is exactly the same as it was.

Those two conflicting, yet equally true statements are proven in the text of this book. In my opinion, those opposing factors make baseball the funny, great game that it is.

This book is broken up into chapters, but it also segments the game and tells the story of Garagiola’s career, too. You’ll learn about the clubhouses and dugouts as they were decades ago. They weren’t always 5-star hotel accommodations, after all.

There are stories of chatter from the benches and tales from long ago that made me laugh out loud. Chatter like “telling the catcher that he called for the wrong pitch, or telling an infielder to move around before somebody ties a horse to him. Telling the umpire to punch a hole in that mask or to get new batteries for that ouija board he’s using.” The ouija board line is a pretty good one, until you compare it to my favorite of the umpire stories in this book.

Nick Altrock, coaching for the Washington Senators, always had an answer for the umpires.. The late Bill McGowan told this one. Several calls had gone against Washington, and Altrock had discussed each one with McGowan. In the sixth inning a foul ball was hit into the stands. McGowan looked back and saw a woman being carried out on a stretcher. He asked Altrock, coaching at third, if the ball had hit her.
In a voice loud enough to be heard in the next county, Nick yelled, “No! You called the last one right, and she fainted.”

As for the more things change the more they stay the same, let’s get into some of that. 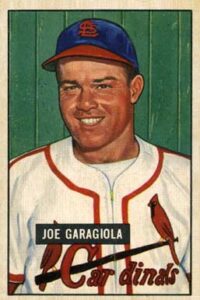 Garagiola writes, “The magic words, if you want to sound like the expert; high and tight and low and away. A strategy meeting could very well at times be called a meeting of the Society for Advancement of the High Tight and Low Away.” This hasn’t changed a bit. Sure, pitchers can hit triple digits on the speedometer, and sliders, curveballs, and sinkers all move more now than they ever did before. But you want to bust the hitter in high and tight on the hands and then get him out low and away. Watch any game today and you’ll see pitchers try to do this. If their location is solid, you’ll see it confirmed with the digital strike zone overlays.

Now, one of the more interesting notes that Garagiola mentions is that “almost everything about baseball is measured or recorded.” In the book he’s talking about bat speed, and while that may have been something to keep an eye on decades ago, now you can’t turn on any broadcast without seeing graphic overlays regarding launch angle and exit velocity.

What sets this book apart is that Garagiola takes the time to write and appreciate that baseball is more than the players on the field and in the dugout. “It takes 25 players with numbers on their uniforms to make a major league ball club, and it takes 400 social security numbers at each ball park to make the game what it is to the fans. It takes about a million fans a season at each ball park to make any of it possible.”

And when he discusses the groundskeepers by saying, “To make the field playable and beautiful is the job; to help the club pick up extra games is the profession,” it’s pure poetry. He talks about “the big job of Mrs. Baseball Player is being housewife and mother in a life that is more topsy-turvy than most. The baseball wife has to be a combination cook, waitress, house detective, and secretary with an ‘Open 24 Hours a Day’ sign hung around her neck.” Now, some of that has become easier with technology, but a lot of these players and coaches rely on their family for support, too.

The groundskeepers, the wives, the ticket takers, traveling secretaries, general managers, scouts, all of the “social security numbers” in the game that help make it what it is all get credit in some form in this book, which makes it a more complete account of the game than most.

And Garagiola’s philosophy of the game is second to none on a large scale. 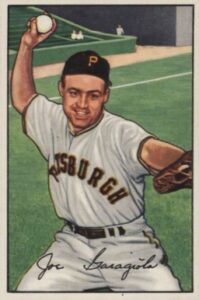 “Baseball gives you every chance to be great. Then it puts every pressure on you to prove that you haven’t got what it takes. It never takes away the chance, and it never eases up on the pressure.” This isn’t limited to baseball, it can be related to any and all sports and most positions in the field of entertainment.

And it is, after all, entertainment. “People come to the ball games today the way they went to the theater in the days of Sophocles and Aeschylus. The people know what it’s all about, but nobody knows how it’s going to work out this time. In baseball, how can you tell how it’s going to work out when the script for today’s game is always written by those great collaborators, Ability, Pressure, Heart and Luck?” It is a beautiful sentiment, but perhaps the most important and the reason that baseball is America’s national pastime is in one of the last paragraphs in the book.

“Baseball is a game of race, creed, and color. The race is to first base. The creed is the rules of the game. The color? Well, the home team wears white uniforms, and the visiting team wears gray.“

It’s a beautiful sentiment for a beautiful game. If you can’t get access to Baseball is a Funny Game by Joe Garagiola, I hope you enjoyed what I’ve shared with you. This book is a must-read for baseball fans, but it’s not the easiest title to come by.

Read the Secret File of technical information and quotes from Baseball is a Funny Game.

Even the greatest of whales is helpless in the middle of a desert.
The path of life shall lead upwards for you.
To let another into your heart, first let yourself in.
More Fortunes >